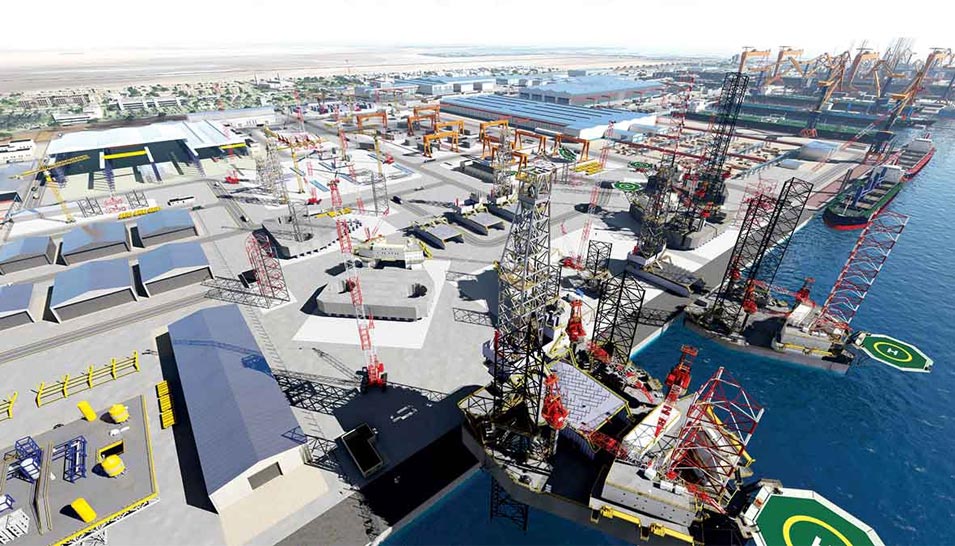 The piping network at the King Salman International Complex for Maritime Industries and Services megaproject in Ras Al-Khair is huge, consisting of more than 300 km of utility piping systems.

As part of Aramco’s strategy to promote nonmetallic materials to combat corrosion and utilize crude for petrochemicals conversion, the project management team evaluated various nonmetallic systems during the project’s design stage, with support from the Consulting Services Department.

It became evident that the benefits of using nonmetallics, in particular for High Density Polyethylene (HDPE) piping systems and Polyvinyl Chloride (PVC), would be significant.

“We can reduce the number of fittings in the system as HDPE is a flexible material, which can bend to optimize piping system design,” said project engineer Bader Alsadan.

In addition to their technical benefits, HDPE and PVC piping types are cheaper than other alternatives and can be sourced locally. The raw materials are also produced locally.

Utilization of nonmetallic materials provides environmental benefits such as lower carbon emissions in production and also in transportation because they are lightweight and locally produced.

The HDPE and PVC pipes are recyclable and have a lifetime of at least 20 years or more without replacement, and any material waste generated can be recycled to produce new pipes or other HDPE/PVC products.

Contractors also found that installation of HDPE and PVC piping systems was less expensive, easier and faster as the assembly of the piping systems can be done inside or outside the excavation trenches.

The success of this megaproject highlights the benefit of installing cost-effective nonmetallic products that benefit the environment, reduce cost, improve the project schedule while maintaining quality.

Upon completion, the King Salman International Complex for Maritime Industries and Services complex will be the largest maritime industries yard in the Kingdom and the Middle East in terms of production, capacity and scale. A cornerstone venture under Saudi Vision 2030, it will be capable of offshore platform fabrication, new ship-building and offer maintenance, in addition to repair and overhaul services capable of handling some of the largest supertankers, which can exceed 300m in length.

The complex is located in Ras Al-Khair area on the eastern coast, 80 km north of the Jubail Industrial City, in an area spanning over 11,8000,000 square meters.