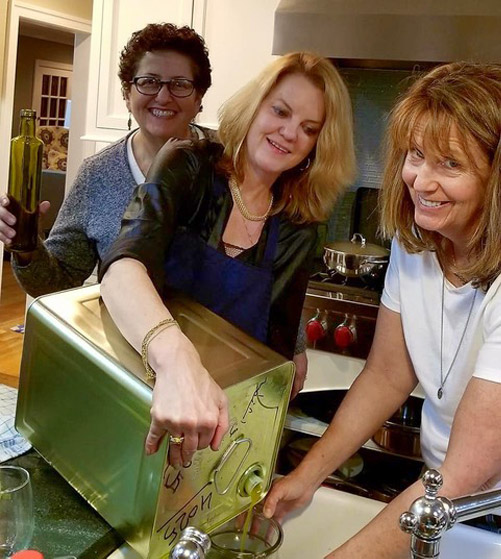 Pitcher of Daily Hugz olive oil, with bottles to be filled. At Raidah Ziadeh Hudson’s BottleWorks.

In October 2017, a group of Aramco Brats (Raidah Ziadeh Hudson, Julie Sawaya, Bridget Mulligan, Lisa Jacobs, Megan McAlister Rudholm, as well as some friends and relations) went on an amazing tour of Jordan and Palestine and to visit Daily Hugz a nonprofit animal sanctuary founded by fellow Aramco Brat, Maad Abu-Ghazalah (DH 1977). Daily Hugz is located in an olive grove in the village of Asira al-Shimaliyah outside of Nablus and offers a beautiful house, camping facilities, gardens, a pool, a soccer field, playground, animal barns and an amphitheater. In this natural setting, children interact with rescued animals in an atmosphere that encourages mutual respect and compassion. In a country where people are under enormous psychological stress, this safe space offers respite for all. This visit gave us a very close, personal and heart-warming glimpse of Palestine and its resilient people.

One of the many amazing experiences we shared was participation in the first-ever Asira Olive Harvest Festival. It was similar to the rec area fairs of our Aramco youth in the 1970s. It included music, dancing, food, traditional crafts, local government officials and even a cooking contest! Later that week, we harvested olives on the property and took them to a local oil press where they were transformed into a brilliant green, peppery, buttery oil that was sent to America. We had to share this with the supporters of Daily Hugz, and the same group of friends gathered together, bottled and shipped the olive oil all over the US.

A brief history of Daily Hugz 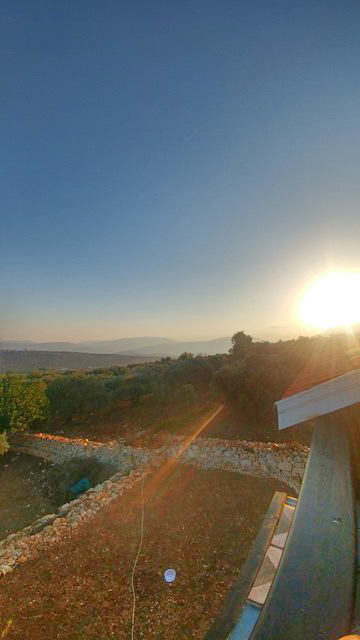 The founder of Daily Hugz is Maad Abu-Ghazalah. His deep roots in Nablus, Palestine led him to want to give something back to the country and its people and animals during a time of great hardship for all. In 2014 he bought an olive grove in the village of Asirah al-Shimaliyah, and set about building Daily Hugz.

These plans included a small house, playground with a pirate ship and a slide, Roman-style amphitheater for cultural events, animal barns, a vegetable garden and even a swimming pool. The stonework castle he dreamed of has yet to be built, and Hugz still needs its own bus to bring children to visit.

Daily Hugz soon welcomed its first animal resident, Houdini the donkey. He’d been beaten and blinded but was determined to live. He passed the rest of his days in peace at Hugz, growing fat and bearing no more of the burdens of life. Houdini was joined by Olive, a lovely shepherd dog who was the first ambassador to visiting children, teaching them not to fear her as they’d been taught by adults. These two rescues laid the foundation for many more to come.

As local knowledge about Hugz grew, people would report animals in need. And some animals, like Boss the big dog, arrived on their own. Likewise, area kindergartens, refugee camps and schools for the disabled were happy to bring their students to this safe and peaceful space in the hills above the village.

In 2017, Daily Hugz presented the first annual Olive Harvest Festival for Asira, and the amphitheater hosted the mayor and cultural events including dancing, soapmaking and traditional olive pressing, as well as a cooking competition. At the same time, Hugz was also hosting its first official visitors from abroad, who were able to share in the life and culture of Daily Hugz and Palestine.

Now, in 2018, Daily Hugz is an established resource for the underprivileged as well as a cultural touchstone and model for Palestinian traditions of hospitality and kindness. Our work is supported by people around the world and their charitable donations to provide food and care for the animals and to offer more and more programs for children in need.

Daily Hugz has an active group of supporters on Facebook and would love new members, click here https://www.facebook.com/groups/DailyHugz/about/.