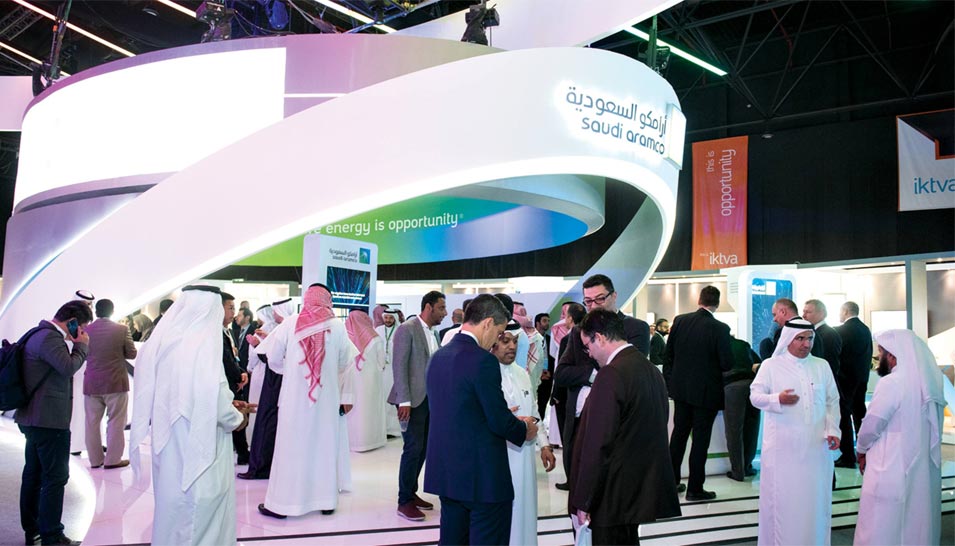 The transformation of Dhahran Expo from 2017 until now has turned the facility into a world-class event venue in the Eastern Province, positioning it in the heart of regional and international exhibition and forum events and helping attract business in the region.

The inauguration marked the official opening of the renovated complex, which houses some of the largest events in the Eastern Province, such as the iktva Forum and Exhibition 2018.

The timely completion of the new Southern Building, as well as overseeing the overall buildings components, is an important milestone for Dhahran Expo. The success of the project has been attributed to the close follow-up, coordination, and execution management by Saudi Aramco’s Procurement and Supply Chain Management, Project Management Team, Community Services and Corporate Affairs admin areas. This successful collaborative work in the name of serving the nation comes with proud achievements that are reflected in the final outcome of the venue’s transformation.

The value of the investment done on Dhahran Expo started in 2017 when Saudi Aramco sponsored and oversaw the development of Dhahran Exhibition Road leading to Dhahran Expo. The company’s contribution includes establishing both 1.8-kilomter walkway with interlocking, pavement, and asphalting work to renovate Dhahran Exhibition Road, as well as the expansion of the Western Building (iktva Gate), with 10,000 square meters of landscaping and 940 square meters of building space.

Saudi Aramco realized the importance of this community contribution, which led the company to continue on its previous work by supporting Dhahran Expo this year with a new building extension (the Southern Building) and the renovation of the Dhahran Exhibition Road’s middle island, which added a significant value to both Dhahran Expo and the company.

The transformation from 2017 until now has helped Dhahran Expo become a world-class event venue in the Eastern Province, positioning it in the heart of regional and international exhibition and forum events and helping to attract business in the region.

Organizing mega-events that attract international and national investors will positively impact the local market in several aspects and drive the economy to grow in the region.

By creating a strong business-oriented environment and an active networking venue, Dhahran Expo will encourage young entrepreneurs and other investors to do business, which in turn facilitates the region’s economic diversification and growth in alignment with the Saudi Vision 2030.

In line with the company’s strategy to support and stimulate a local business environment — and to attract international companies to showcase their products in Saudi markets — Saudi Aramco has contributed to and overseen the establishment of the Dhahran Expo expansion. The new expansion includes the Southern Building and its associated area landscaping with a total space of 18,000 square meters. The company contributed to upgrading the facility by renovating the middle island for Dhahran Expo’s road and landscaping the area as part of the company’s contribution towards citizenship and the community. The Southern Building has a total space of 3,160 square meters and includes a massive lobby with four reception desks, seven multi-purpose halls, a VIP lounge, three meeting rooms, 32 offices, a command room, and a clinic.

The landscaping included VIP parking lots, interlocking and pavements, and other aesthetic views including fountains. The project was completed with a highest standard and quality specifications within 190 days, reflecting the determination of the teams that accomplished this major project.

The inauguration event was attended by several businessmen, investors, and Saudi Aramco employees who supported this initiative. Guests were welcomed with an open tour of the new facilities and had a chance to see how this ambitious plan was turned into a reality.

The event recognized the efforts of Saudi Aramco and Dhahran Expo employees who oversaw the expansion with a memorable gift presented to them by HRH. Saudi Aramco general manager of Government Affairs Khalid K. Al-Mulhim accepted the gift on behalf of the company.

Al-Mulhim restated Saudi Aramco’s commitment to community, saying, “Our efforts in this renovation were accompanied with great pride and excitement as we see the Dhahran Expo advance to a world-class venue that supports our aspiration for the Eastern Province region and Saudi Arabia as a whole. As the Kingdom powers forward to its Vision 2030, there was a need to have a venue of such caliber that can proudly host international events and be a regional beacon. I believe we achieved that.”

Dhahran Expo president and chairman Abdullah A. AlFouzan presented HRH with a memorable gift in return for honoring the Dhahran Expo’s inauguration.