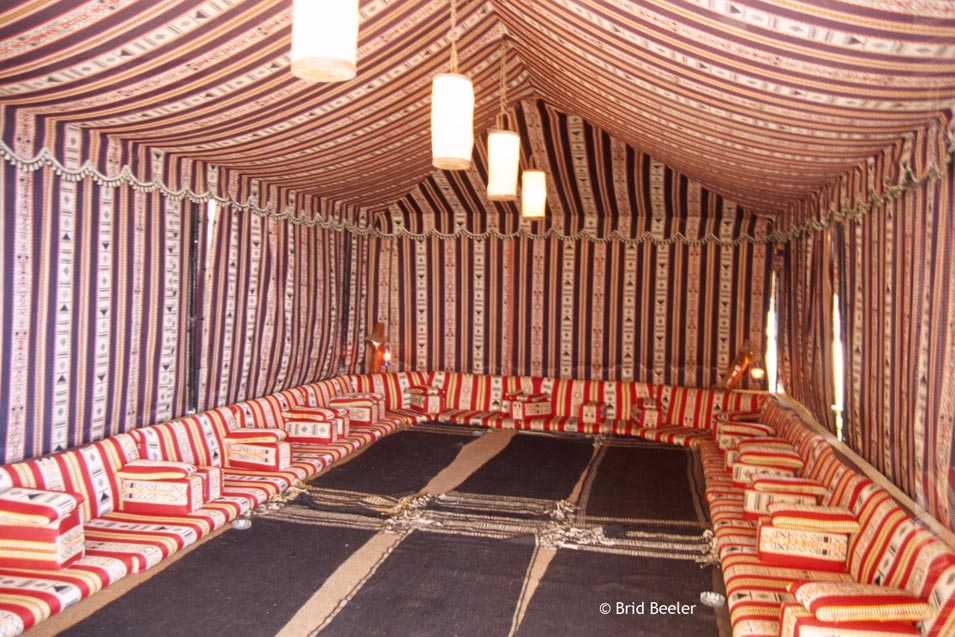 I first became intrigued with tents when I discovered a friend in Riyadh had a traditional Saudi tent in one of the rooms in his house! Like many of our homes in Kingdom, the rooms in his house were on the large size. With all that space, you need to be innovative in how to decorate, and he had decided to turn one room off the entryway into a tent. I was amazed when I saw it! Instead of a traditional majalis where you sit on the floor, he was using Tihama benches (the tall seating found around Najran) made of palm fiber rope and wood from the Athl tree. Atop these high benches were copious Saudi pillows and Bedouin flatweave Kilims. The floor itself was strewn with more colored kilims. To add to the flavor were stuffed birds of prey at the entrance to the tent. While I could have done without the menagerie, the tent was truly an inspiration…a work of art.

This set the wheels of my imagination in motion, and I thought about having my very own traditional Saudi tent. But what was I going to do with one? It is not as if I was going to the desert to pitch it. You would need a team of men who knew how to put up such a tent which could take at least a couple of hours’ work, tying down ropes, staking poles and getting the metal frame erected which the tent sits atop. That sounded difficult and I certainly did not require a tent for the desert as I had a proper western-style tent that we used for camping. 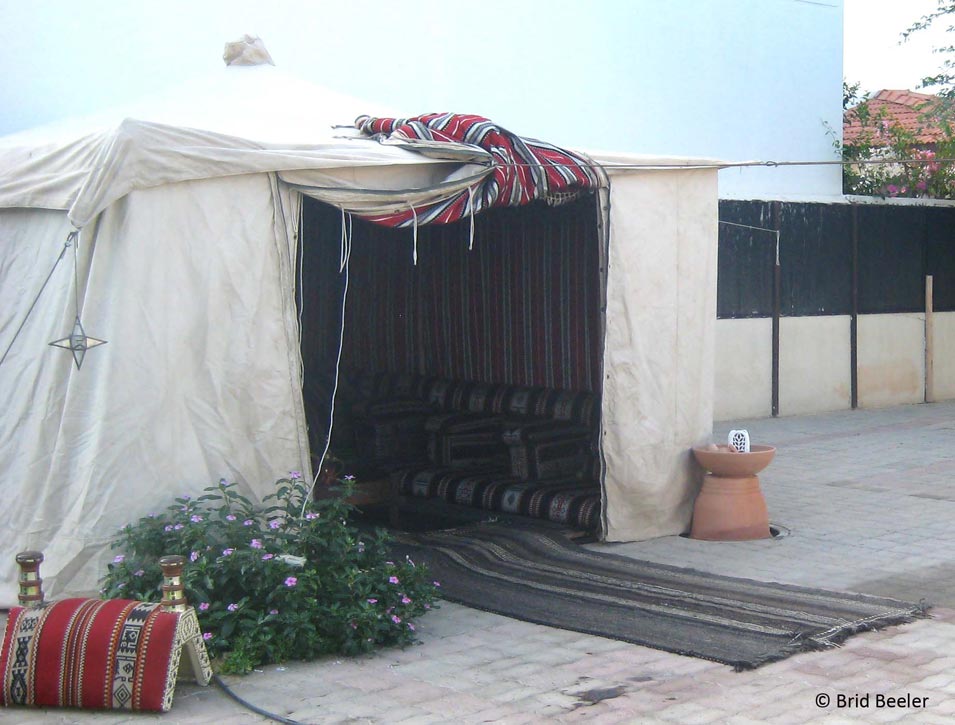 I was familiar with the tent cities that spring up in the desert in winter months, where many Saudis have farms with an array of tents for sleeping and entertaining. Here they can enjoy a nostalgic escape from modern city life, but with the modern conveniences of electricity, water, bathrooms, and air conditioning.

With enthusiasm, I set forth on my own mission in search of a tent, but, not for the house (or the desert) but for the garden. One morning, my driver and I headed deep into Batha, the densely populated heart of Riyadh, in search of Souq Al Khaima, the tent souq.

In the crowded alleyways of the covered market, all manner of paraphernalia for camping in the desert could be found. An army of tentmakers were busily working at their machines, swamped in fabric. The reverberating din was deafening, as the constant hum of sewing machines clashed with the cutting and welding of steel tubing for the substantial frames the tents sit atop. Tents can be ordered and made to specific requirements in shape, height and size along with various weights of cotton. It takes weeks for a tent to be made and many a trip to Souq Al Khaima to check on progress. 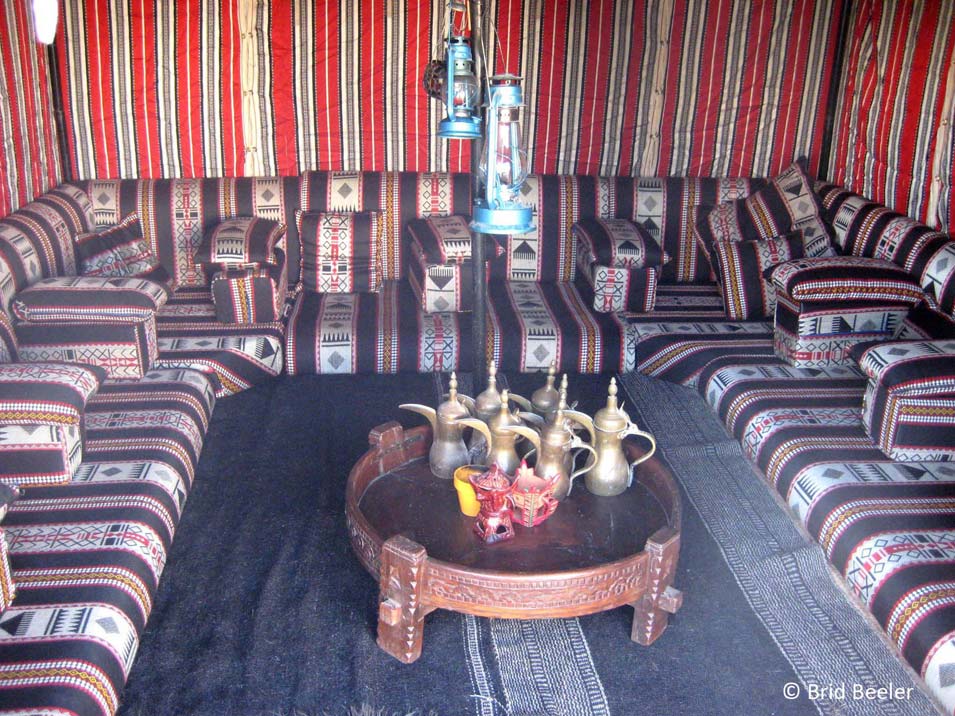 Like choosing Farrow & Ball paint on the walls of your home, I found it was the inner lining of a tent that can increase the cost. There are many varieties of lining which are of machine-printed cottons or hand-sewn appliqued cotton some with Islamic designs. Green tends to be popular, along with yellow. However, the traditional Saudi Arabian Sadu in wool as opposed to a synthetic blend is what is most popular if your pocket allows. For me, it had to be the original wool Sadu for my tent lining and for the majalis I chose a contrasting color in black where one would gather and sit. 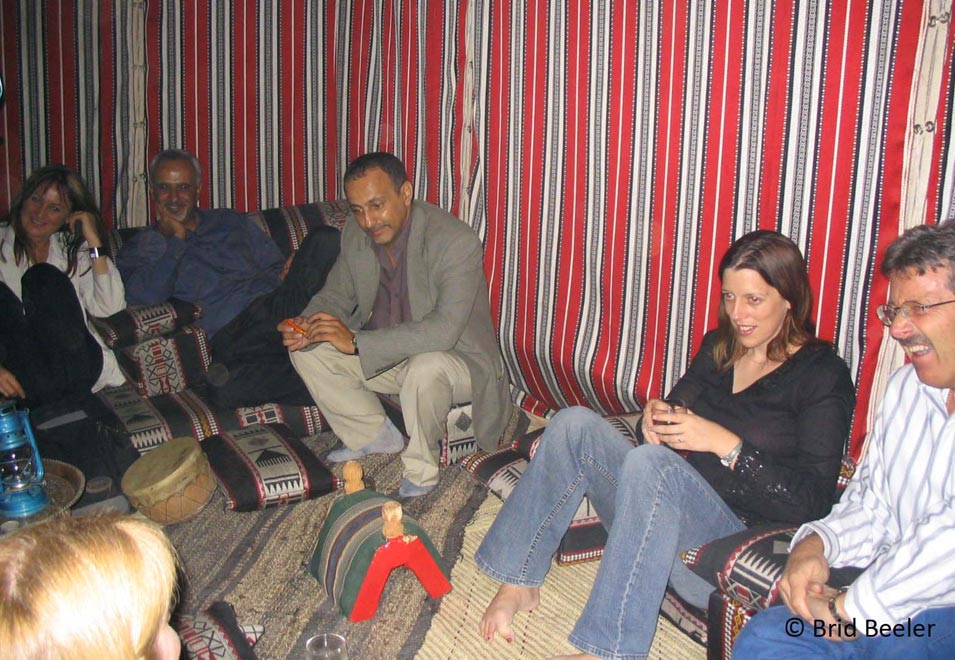 Over the years, my tent, complete with majalis, moved around the Arab world with me. From Saudi to Yemen, to Oman, Yemen and back again. Each time it took pride of place in the garden. It was a gathering place, a place to sit before dinner, a place to go and relax with full stomachs after dinner; a place of refuge where long conversations with friends could continue into the early hours of the morning.

Tent pavilions throughout the Arab world continue to be used to this day, for wedding celebrations, feasts in hotel gardens during the Eid Al Fitr and Eid Al Adha celebrations, and for many other festive family occasions. There is no place more pleasant to be in Arabia than outdoors in a tent on chilly evenings where you are in the warmth of the tent, always with an electric heater to keep you toasty. Maybe it was all a bit of madness, but it was madness that enriched my life.