Mosques that Host Some of the World’s Largest Eid Congregations 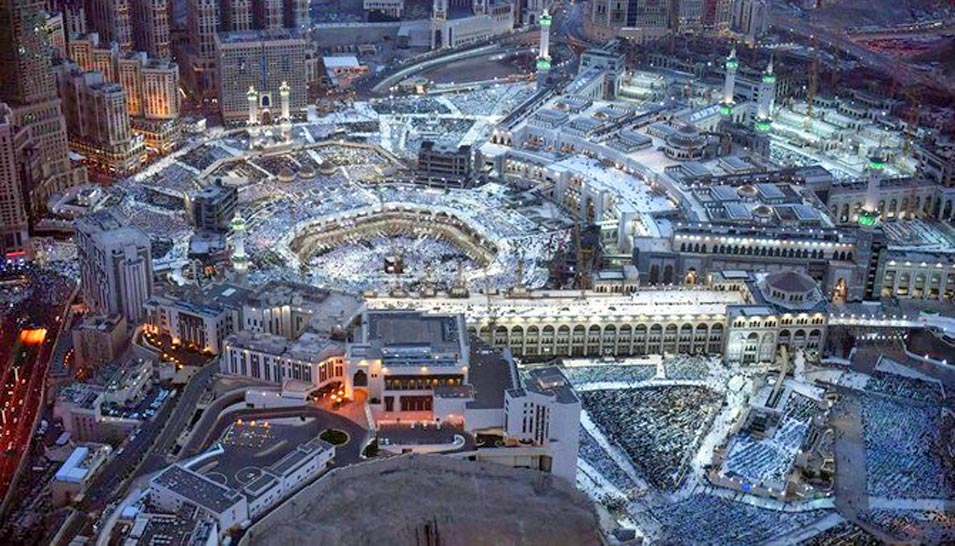 An aerial night view of the majestic Grand Mosque in Makkah teeming with worshippers. (SPA)

DUBAI: Muslims will soon observe Eid Al-Fitr, the festival that marks the end of Ramadan.

Eid Al-Fitr, which means Festival of the Breaking of the Fast, will see Muslims gather for the congregational prayer in mosques or special prayer grounds around the world. Preachers congratulate Muslims on the blessed occasion, pray to Allah Almighty to accept their fasting, charity and good deeds, and wish them good outcomes. 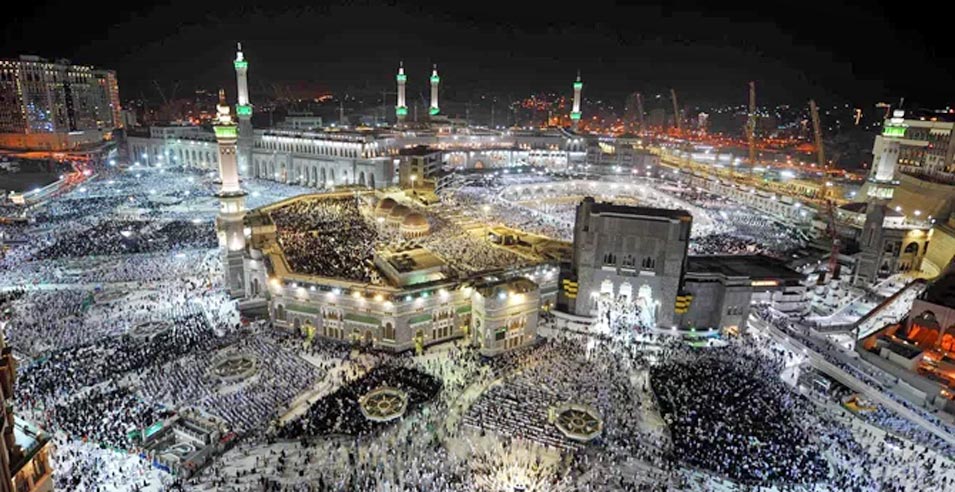 An aerial night view of the majestic Grand Mosque in Makkah teeming with worshippers. (SPA)

History: Dates back to the era of Prophet Ibrahim, who built a smaller, simpler version with his son Ismael. The Grand Mosque, which surrounds the Kaaba, has a Green Dome in the southeast corner. First painted green in 1837, the dome is built above the Prophet’s tomb and the tombs of Caliph Abu Bakr and Caliph Umar. The late Saudi King Abdullah bin Abdul Aziz launched a major extension project in 2007 to raise the masjid’s capacity to two million. After passing through the control of various caliphs, sultans and kings, the mosque is under the control of the King of Saudi Arabia in his capacity as the Custodian of the Two Holy Mosques.

Significance: The Grand Mosque is the holiest site in Islam, being the place of pilgrimage for the Hajj and also as the main phase for Umrah, the lesser pilgrimage. The masjid includes sites such as the Black Stone, the Zamzam Well, Maqam Ibrahim and the hills Safa and Marwa. 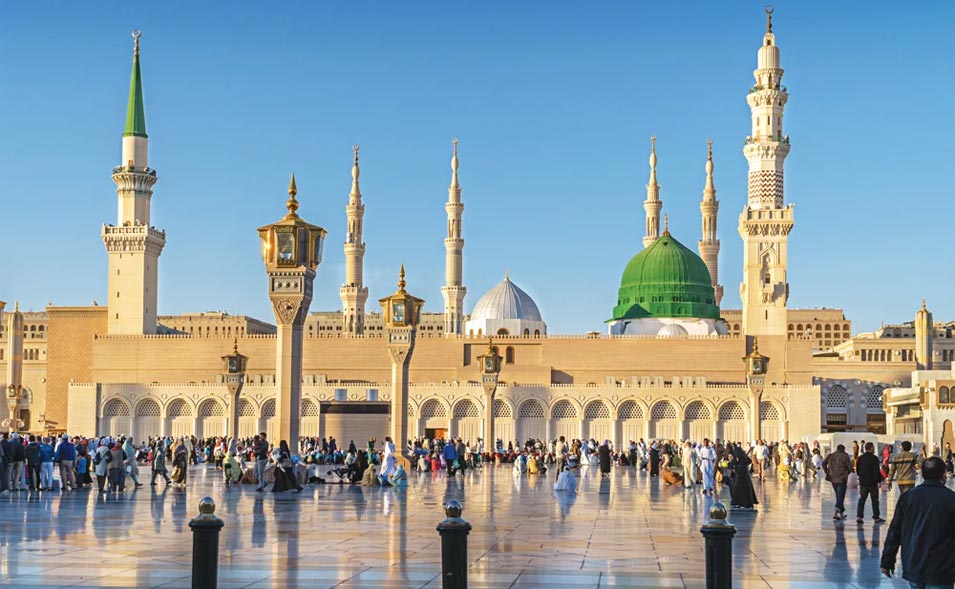 History: Built by Prophet Muhammad in 622 AD, the original mosque was an open-air building and served as a community center, a court and a religious school. The structure was expanded many times over the years in the reign of the caliphs and the Umayyad, Abbasid and Ottoman states. The largest expansion operation was undertaken by the Kingdom in 1994.

Significance: Many pilgrims who perform Hajj travel to Madinah to visit the Prophet’s Mosque due to its strong connection to the life of the Prophet. The masjid is home to the tomb of Prophet Muhammad. Every year tens of thousands of pilgrims perform the ritual of Itikaaf, involving seclusion and staying in the mosque with the intention of worshipping.

History: Impetus for the masjid’s construction came from Saudi King Faisal bin Abdul Aziz. In 1969 an international competition was held in which architects from 17 countries submitted 43 proposals. The winning entry was that of Turkish architect Vedat Dalokay. Construction began in 1976 and ended in 1986. The design was conceptualized as the national mosque of the country and a symbol of the hopes and aspirations of Pakistan. It was dedicated to the memory of King Faisal, who bore the cost of the project as a gift to the Pakistani people.

Significance: The shape of Faisal Mosque is inspired by a desert bedouin’s tent and the Kaaba in Makkah, flanked by four unusual minarets inspired by Turkish architecture but lacking both the traditional domes and arches of most other mosques. The walls are adorned with golden calligraphy, with large chandeliers hanging from the ceiling. The ceiling itself is a piece of art, designed with sharp lines and grooves. The mausoleum of General Zia Ul-Haq is located adjacent to the mosque. 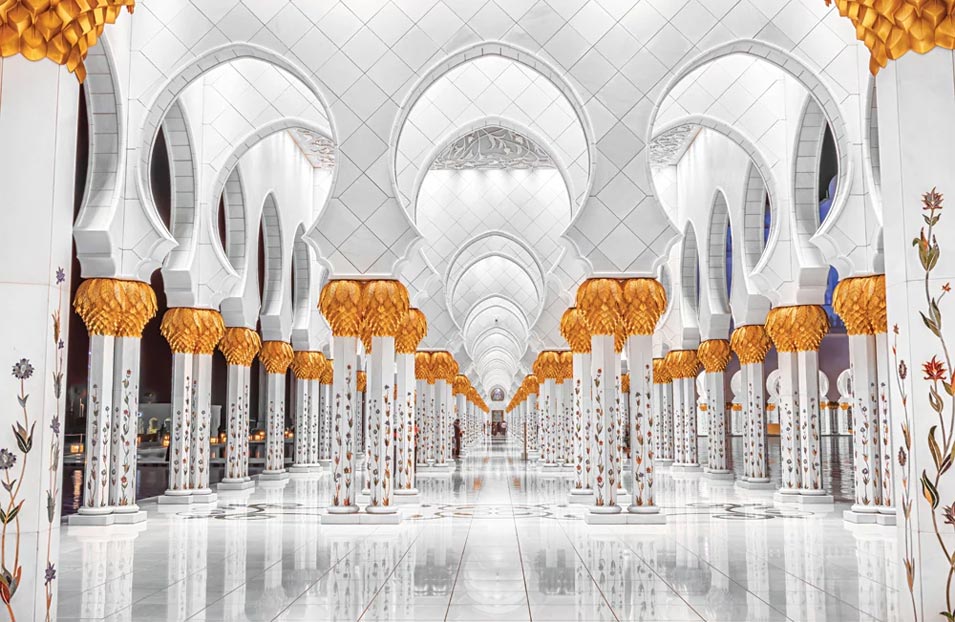 History: Designed by Syrian architect Yousef Abdelky and constructed between 1996 and 2007, the project was launched by the late president of the UAE and ruler of Abu Dhabi, Sheikh Zayed bin Sultan Al-Nahyan. The architects were British, Italian and Emirati, and design inspiration came from Turkey, Morocco, Pakistan, Egypt and other Islamic countries. More than 3,000 workers and 38 companies took part in the mosque’s construction.

Significance: Sheikh Zayed’s vision for the Grand Mosque was to incorporate architectural styles from different Muslim civilizations and celebrate cultural diversity. The largest mosque in the UAE, it is the key place of worship for daily prayers, Friday gathering and Eid prayers. The hollows of the domes are etched with verses from the Qur’an and painted with gold leaves in Naskh lettering. 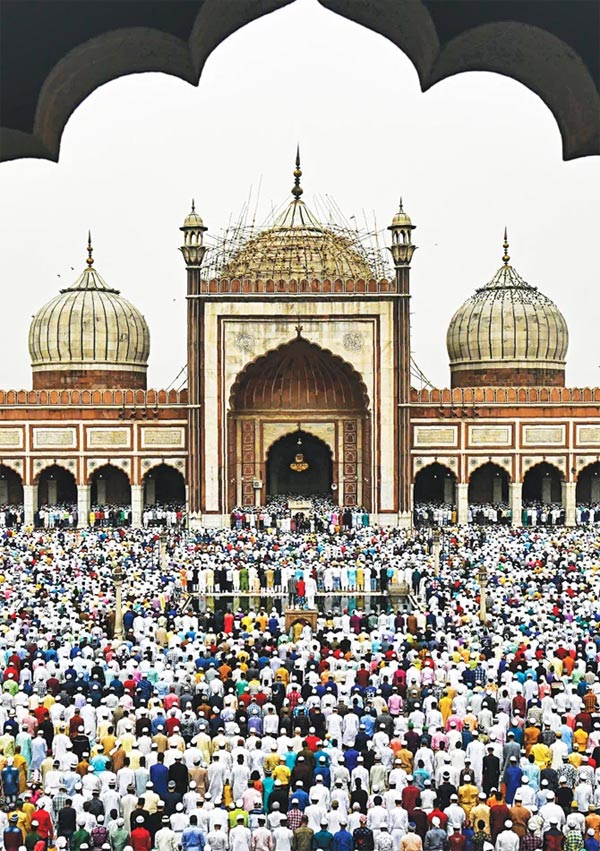 History: Commissioned by the Mughal Emperor Shah Jahan after he moved his capital from Agra to Delhi, the mosque’s construction began in 1644. The architect was Ustad Khalil, who used red standstone and white marble. The construction, involving 5,000 artisans, was completed by 1656. The masjid was inaugurated by a cleric from Bukhara, Uzbekistan, Sayed Abdul Ghafoor Shah Bukhari, on whom Shah Jahan bequeathed the title Shahi Imam. These days, the masjid is managed by the Delhi Waqf Board and the Jama Masjid Committee under the direction of the present Shahi Imam.

Significance: The mosque faces west toward Makkah and houses several relics of Islamic religious significance, including an age-old transcript of the Qur’an. Each year thousands of Muslims throng the masjid to offer special Eid prayers in the morning. Seven arched entrances are inlaid with inscriptions in black marble detailing the history of the mosque.