A journey that reaffirms Kingdom’s special relations with United States 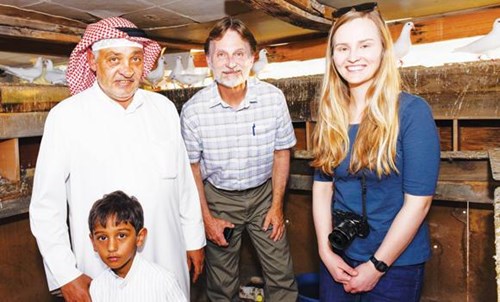 DHAHRAN: When Mike Keller sat next to Saad Al-Shammari to enjoy a traditional Saudi lamb feast in Abqaiq last week, generations of deep family ties that cross thousands of miles of land, ocean and cultures were reconnected. 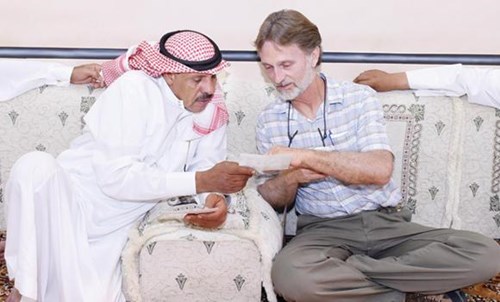 Everyone has a place that they call “home.” For Mike Keller, who lives in Windsor, Sonoma County, California, home is Saudi Aramco’s community in Abqaiq where he spent the first 16 years of his life.

The 62-year-old returned with his youngest daughter, geology graduate Sierra, 23, to revisit the people and places tied to his personal family history, on a journey that reaffirmed a company’s and a Kingdom’s special historical bonds with the United States, just ahead of today’s visit of US President Barack Obama.

Mike Keller’s family roots in Saudi Arabia run deep. He was born in Dhahran in 1954 and lived in Abqaiq until 1969. His grandfather, Clem Gibbs, had made the move to Saudi Arabia in 1945 and worked in Aramco’s Exploration Department.

Keller’s father, Elmwood “Woody” Keller made the move to the Kingdom in 1948, working as a mechanic, then a foreman in Drilling Equipment Services in Umm Unaiq and Abqaiq.

Woody Keller met his wife in Saudi Arabia and their children Mike and his sister Andrea were both born in the Kingdom. Woody retired in 1969 after a 21-year career as a driller. His best friend during that time was fellow driller Hamid Al-Shammari. One of Woody Keller’s late-life wishes was for his son to reconnect with Saad Al-Shammari, the son of his dear friend. That reconnection came during a KSA Reunion hosted by Saudi Aramco in 2009 — though it was a brief encounter.

Keller expected that visit to Saudi Arabia to be his last, but when daughter Sierra suggested he join her on a trip to Oman, he felt that it was too close to “home” not to try to visit again.

In his quest to secure visit visas for him and his daughter, Keller did a little research and decided to send a speculative e-mail to Saudi Aramco explaining his family background and desire to revisit the places of his birth.

To his surprise, the company responded to his e-mail the following morning indicating that they would be delighted to make arrangements for a visit. So a journey began that would see Mike and Sierra Keller reanimate a rich family history in Saudi Arabia, bringing to life a series of grainy black and white photographs that had informed many of the stories Sierra had heard throughout her formative years.

The highlight of the trip would be the visit to the Al-Shammari family in Abqaiq. For Mike Keller, the Abqaiq road of 2016 is a lot different to that of the 1950s and 1960s. He was struck by the pace of progress and a Kingdom and a company undergoing transformation.

“The thing that I have seen the most is just the amount of growth and expansion of industry in this area. The road to Abqaiq used to be a two-lane road and it would take an hour to get to Abqaiq on a rickety bus or in a taxi. Today it is an eight-lane freeway and the speeds are greater and the development has increased along the road. The amount of growth and the pace of growth is tremendous.”

As the Saudi Aramco bus traveled along the road, drawing him closer to his birthplace and a Saudi family that had so much impact on his father’s life and career, Keller reflected on his personal affinity with Saudi Arabia and Saudi Aramco.

“For me Saudi Aramco has played a big part in my life because it provided my formative years from birth right through to the age of 16 and it is something that I have tried to explain to someone, that I spent the rest of my life, after leaving Saudi Arabia, always wondering about Saudi Arabia and wondering about Abqaiq, how it looked, even dreaming about walking on the streets in Abqaiq and I think that is the way with a lot of Aramcons.

“They think about this place because it has had such an impact on their lives. I have spent most of my adult life thinking about Saudi Arabia. When I had a chance to come back here in 2009, I jumped on it and it was such a pleasure to come back. With regards to the impact that it has had on my family — they have had to listen to stories that I have been telling them for years when they were growing up — about what it was like to live in the Middle East and in Saudi Arabia in particular.”

We entered the Majlis area where Keller, clutching a small package of old family photographs, sat alongside Saad. They exchanged pleasantries, reminisced and surveyed the photographs as family members trickled in, including Hamid, Saad’s son named after his grandfather. Arabic coffee and tea were duly served as talk of Aramco and family flowed.
After some time we were taken to share the traditional Saudi lamb feast. The air was full of stories and the camaraderie that naturally infuses Saudi hospitality.

“I had an opportunity to talk personally with Saad about our families and about our fathers and I brought some photographs with me of Saad’s father Hamid when he had started working for Aramco as a very young man. I had pictures of him that I gave him and later pictures of Hamid and my father working in the drilling department,” said Keller.

“Saad was very grateful for those photographs because he had very few photographs of his father and he actually brought out some photographs that I had given him in 2009 and he had kept the photographs in a safe because he considered them so precious that he did not want to lose them. He distributed the photos I gave to him this time to his children. His eldest son is named Hamid, after his grandfather, and everyone was in awe looking at their grandfather or their uncle.

“It was a great experience and then after a while we were called into another area which was like an enclosed patio and they brought out this fantastic feast of food which was a big platter of rice with lamb, prawns and fish and we just ate and then we relaxed for a while.”

The Kellers were then taken to the Al-Shammari family farm in the desert outside Abqaiq, an oasis of animal and plant life. Saad was keen to show them around as the young Al-Shammari boys ran around while the sun settled into the horizon.

“It was important for them to show me the farm,” Keller observed, “I could tell that they were very proud of what they were showing us. They had doves, chickens, goats and a small vegetable garden — it was quite a pleasure to see and I knew that they were happy they were able to show it to us.”

His thoughts returned to his father: “I think that my father would like to know that I met with Saad and re-established our family connection with the Al-Shammari family. I think that he would be very happy to know that I personally made the connection with his friend’s son and that we established a bond between our families. I have shared a part of my family with him and he shared his family with us and we hope that bond will continue.”

Later during the trip, the Kellers spent time walking the streets of Saudi Aramco’s Abqaiq community and visited the school, places that are imprinted in the memory of Mike Keller, places that will remain in his mind forever. The Keller house on 18th Street is just the same as it was all those years ago and holds a strong emotional pull for father and daughter.

Sierra witnessed the old photos and stories of childhood come to life before her.

“Growing up I had seen a lot of photographs and also heard a lot of stories so I was a bit prepared, but it has been quite an experience to see my father walking the streets and reacting to different sites and probably imagining himself riding his bike with his friends or doing different things when he was younger, reminiscing in the place he was born.”
It was a homecoming that will stay with Keller and his daughter. He knows he may never have an opportunity to visit his place of birth again.

“Memories of growing up in Abqaiq are really no different than those of growing up in any other community. It was a typical boyhood, except for the fact that we played in the desert, we went to school and we spent hours at the community swimming pool.

“The Aramco communities had a lot of activities for the families and there was always something going on with the school. We were involved in the baseball, tennis, bowling, football, basketball. It was really no different from living in the United states for us and we didn’t know any different, just life in Saudi Arabia.

“I remember my father being called in the middle of the night and he would have to drive out to a drilling rig where there might be a problem and he would have to troubleshoot the problems and get the big caterpillar diesel engines back running for the powerhouse of the camp. I think that he really enjoyed that and he also very much enjoyed living in Saudi Arabia and he enjoyed the people that he worked around. He enjoyed working with the Americans and the Saudis. He had many Saudi friends and he thought that this was a good place to raise a family, which it was.”

The decisions made by Clem Gibbs and Woody Keller back in the 1940s to travel to Saudi Arabia set in train a lifetime of experiences and relationships that are indelibly inked in the Keller and Al-Shammari family histories.

And according to Mike Keller, good decisions they were.

“I know that the offer of employment in a place as exotic as Saudi Arabia with good benefits were probably an attraction to my father and I know from speaking with my father in his later years that he said that it was the best decision he had ever made in his life.”

Now a new generation of Saudis and Americans have experienced the deep historic ties between two peoples and two nations. The relationships carry on.