Improvements to the Cray Supercomputer expanded its memory to 2.2 megabytes. 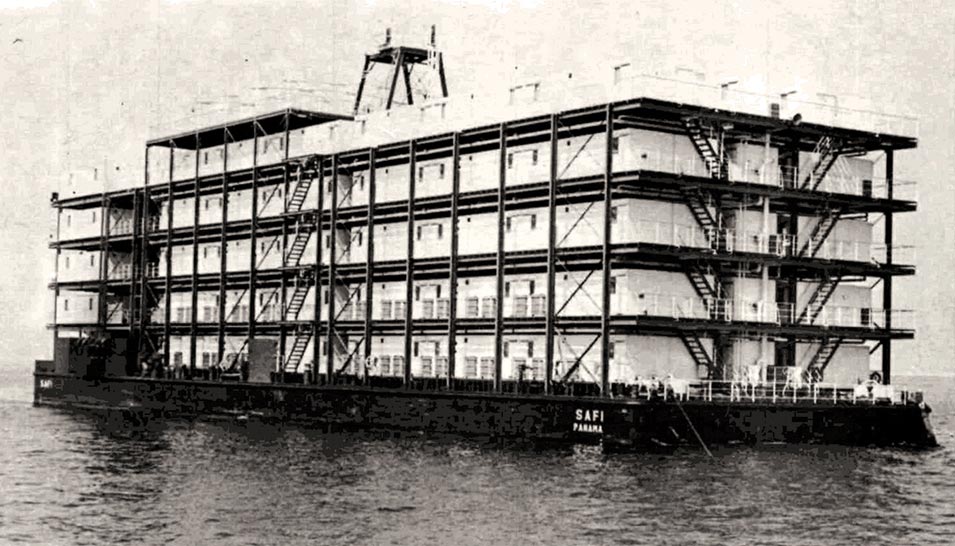 Accommodation barge Safi, which will soon house 750 contractor employees, moored off Was Tanura prior to final berthing. (PPS)

Look back to the Sun and Flare and The Arabian Sun provides a view of progress made over decades in the Kingdom.

Here are some of the BIG headlines over the decades.

The world’s largest tanker, the Universe Leader, made her first call to the port of Ras Tanura on Monday, Sept. 2, and started loading during the night. A cargo of 590,000 barrels of oil was taken on the night of Sept. 2 and Tuesday, Sept. 3.

This cargo, destined for the port of Santos, Brazil, is the record cargo taken by one vessel from Ras Tanura. The former record was held by tanker al Malik Sa’ud al-Awal, which took on a capacity load of 344,000 barrels. 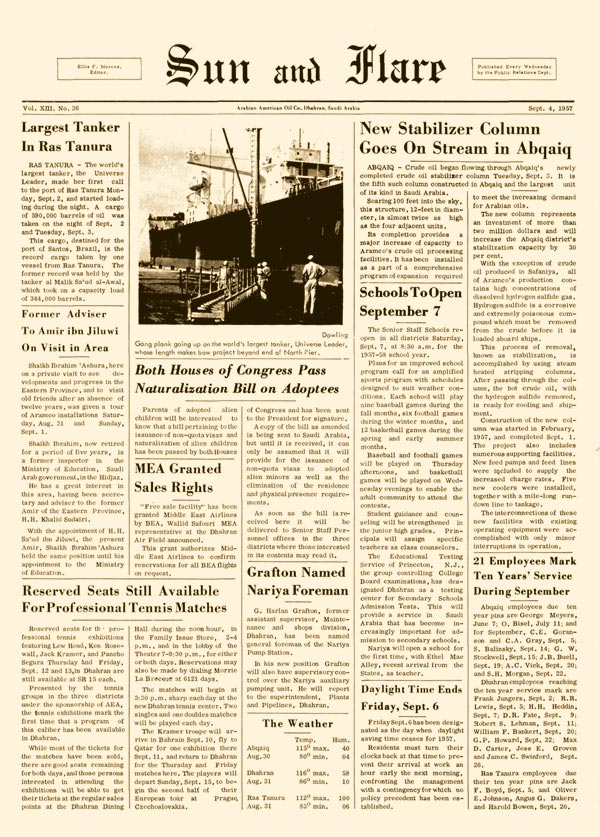 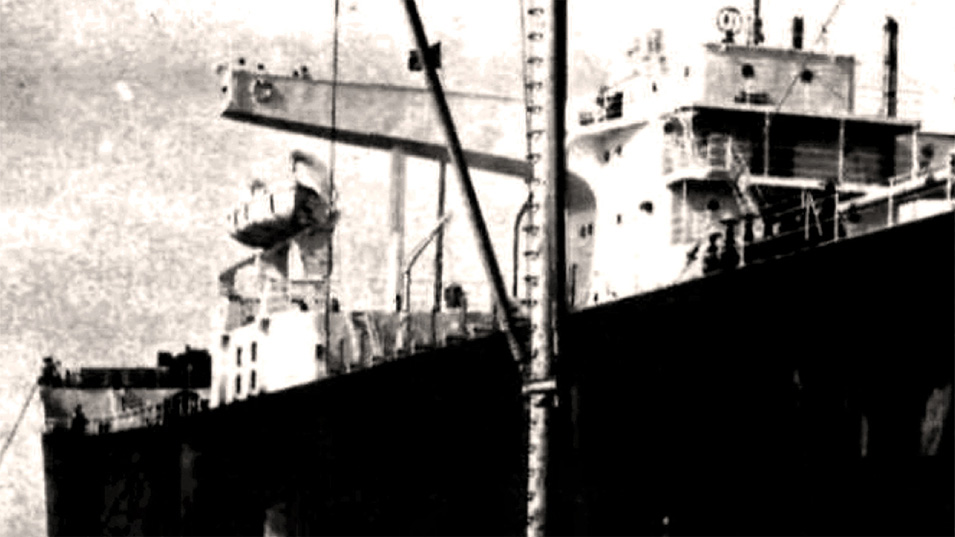 Aramco transportation crews had another bout last week with a heavy-weight contender — a 245-ton column for the new crude topping unit under construction at the Ras Tanura Refinery.

The column arrived from Japan in June aboard the Nachi Muru, and was offloaded to a barge, which was towed to a parking spot at the terminal’s West Pier to await moving day. The column was transferred to moving dollies on August 18 and 19. 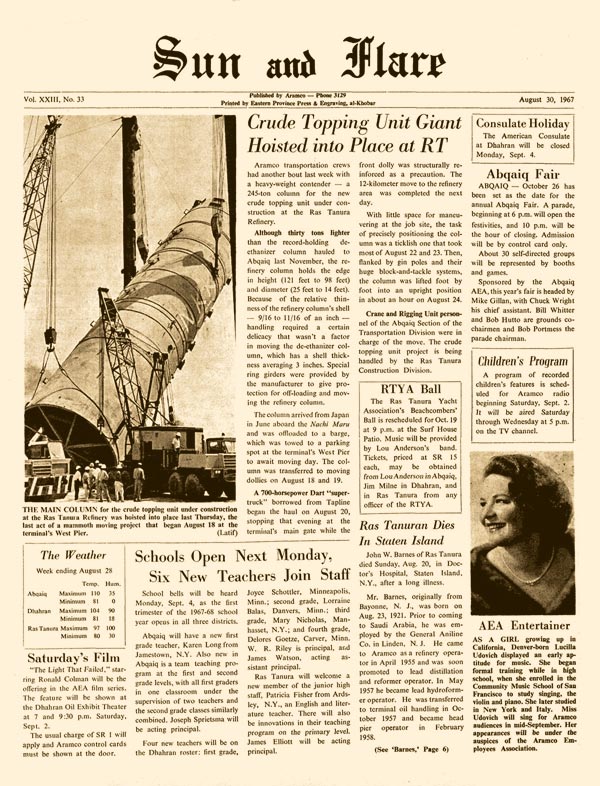 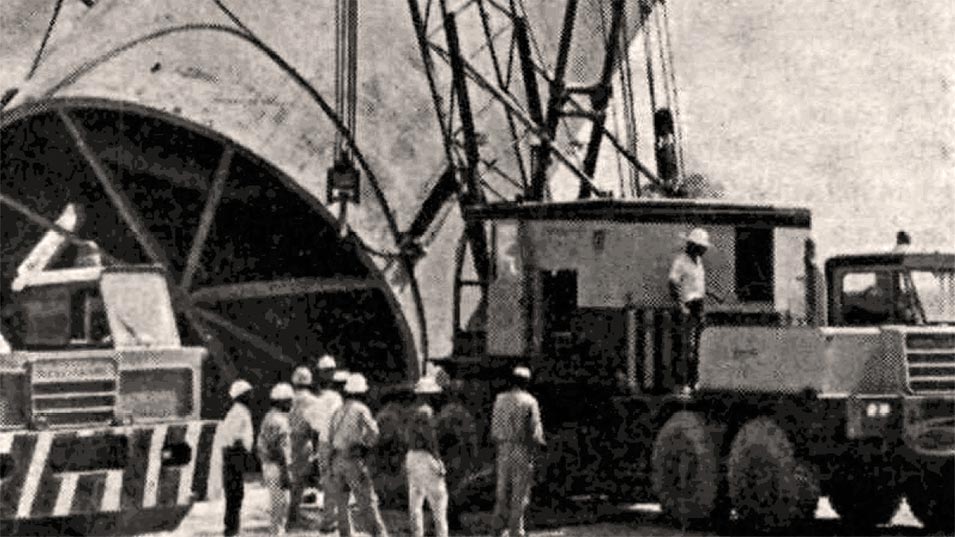 The main column for the crude topping unit under construction at the Gas Tanura Refinery was hoisted into place last Thursday, the last act of the mammoth moving project that began August 18 at the terminal West Pier. (Latin)

A significant portion of Aramco’s contractor program materialized last Wednesday with the arrival at Ras Tanura of two “floating hotels” — five-story accommodation barges with complete infrastructures that were specially built in Japan for Aramco.

The barges, Rabibah and Safi, made the 7,600-mile overseas journey from Japan to Saudi Arabia in about two months.

“Several major industries were integrated to build the total living complexes,” said Aramco Project manager John W. Goodrich, “and they worked under a very tight schedule. Ninety days after construction began, the accommodation barges were delivered at the shipyards, and they were fully operational when they arrived here last week.” 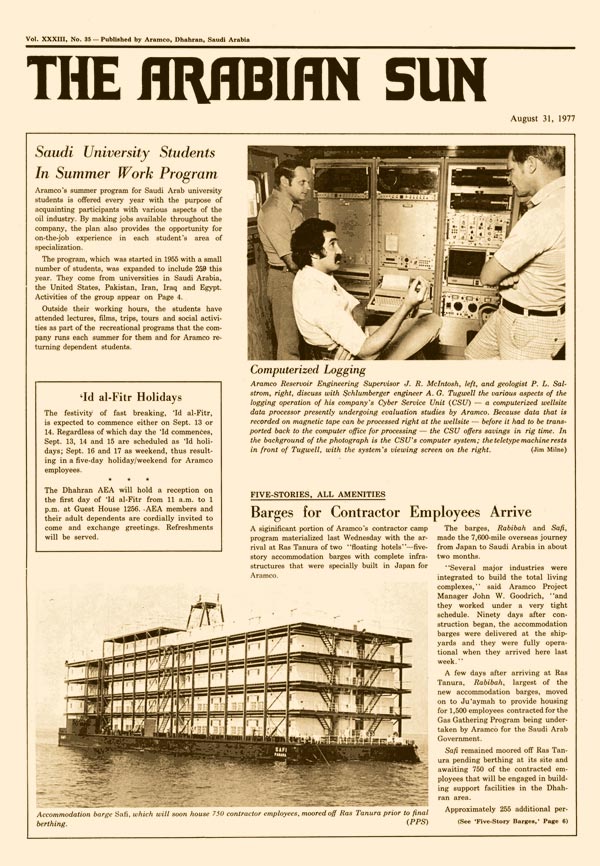 The recent addition to the mighty Cray supercomputer’s memory of four mega-words of buffer memory — each mega-word is 1 million 64-bit words — and 14 Direct Access Storage Devices (DADSs) — each holding 75 million words — falls in the category of a nonevent, according to manager Mike Sadlowski of the EXPEC Computer Center’s Network Operations Services Department.

“It was a predicted and normal addition,” he says, but enlivens the description of this particular normal business by adding, “You might say the Cray reached mid-life, and received an invigorating shot of increased memory and DASD.” 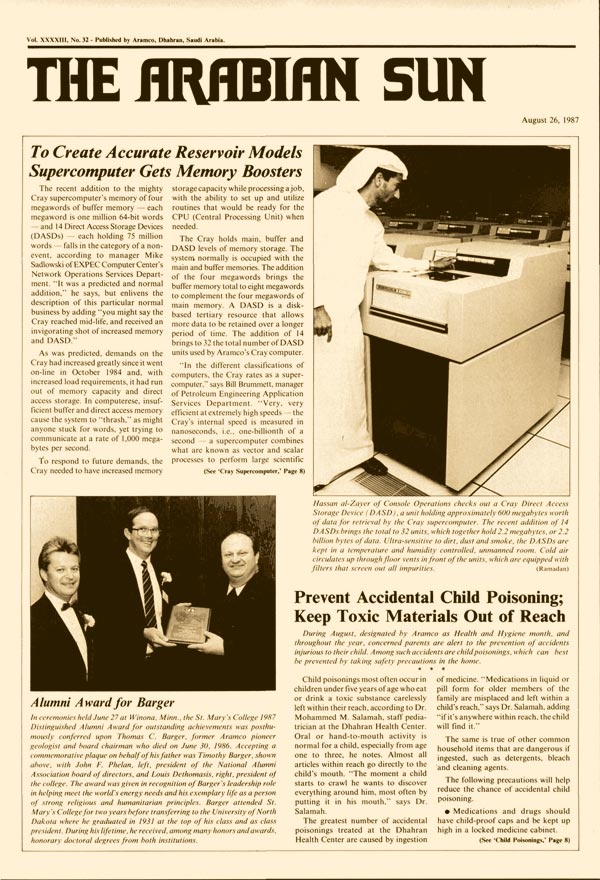 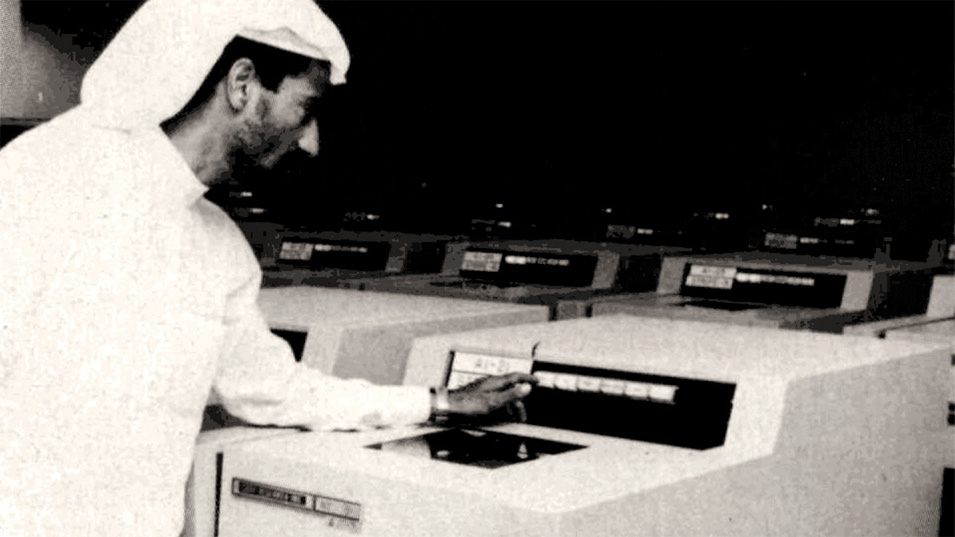 Husam al-Zayer of Console Operations checks out a Cary Direct Access Storage Device, a unit holding approximately 600 megabytes worth of data for retrieval by the Cray supercomputer.

There has been a stampede of U.S. residing Saudi Aramco annuitants to Texas, with the majority moving to Houston.

Of the 2,808 annuitants and widows in the latest edition of Al-Ayyam al-Jamilah’s Annuitants Annual Address List, 636 live in Texas, making the Lone Star State the most popular for retirees. In The Arabian Sun’s last report in 1995, Texas ranked third with 137 annuitants.

California is second on the list with 508 residents, but only 23 new annuitants moved there since the last report.

The sun probably plays an important role in selecting a retirement home, with Florida ranking third (355). 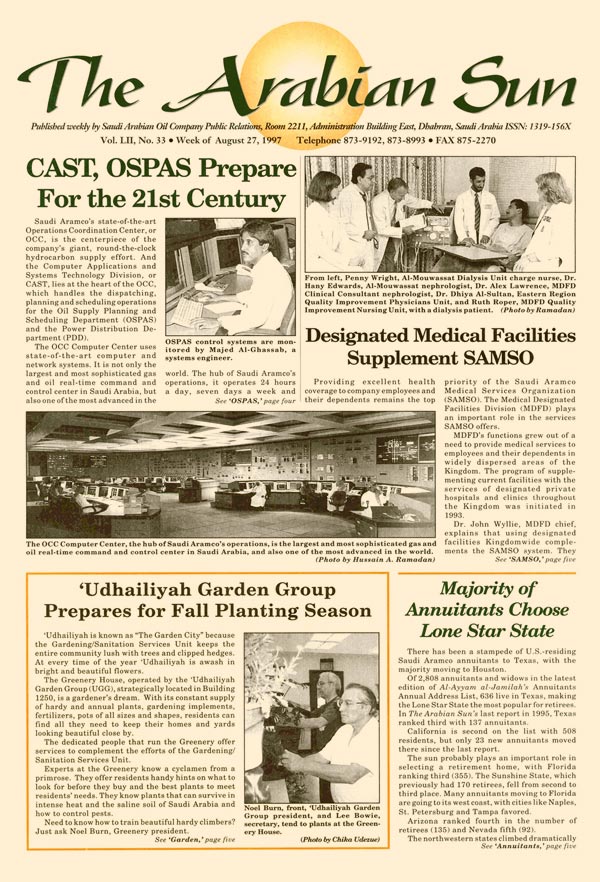