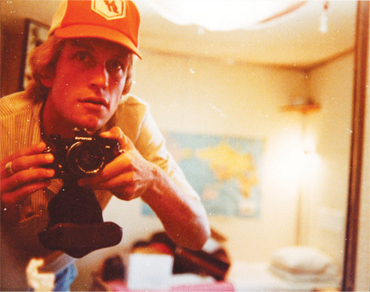 Mark Lowey took what he calls an “early selfie” in the mirror of his room in the Abqaiq contractors camp, with his Olympus OM-2. 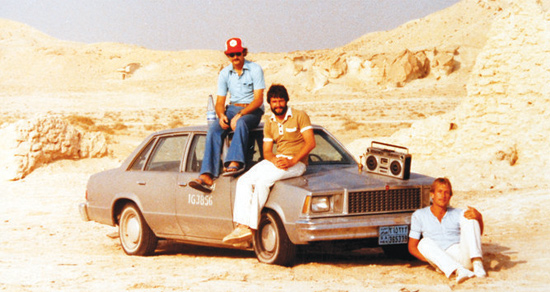 Mark Lowey with his American friends Jim Sides and John Grimm, on a weekend desert excursion in 1979, near Shedgum. (Courtesy of Mark "Abu Jack" Lowey)

DHAHRAN: From San Francisco, the hippie heartland of 1970s American counterculture, to Abqaiq, Aramco’s gated community and the largest oil facility in Saudi Arabia — Mark Lowey’s love of adventure took him on a journey that later defined his life.

After graduating with a science degree specializing in construction engineering in 1977, Lowey was offered a job in San Francisco. But when the 21-year-old engineer heard that a friend had received an offer from another company that planned to send him to Saudi Arabia, he decided to take the leap. 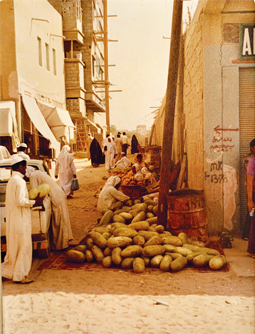 A watermelon vendor in Hofuf in 1978. (Courtesy of Mark "Abu Jack" Lowey) 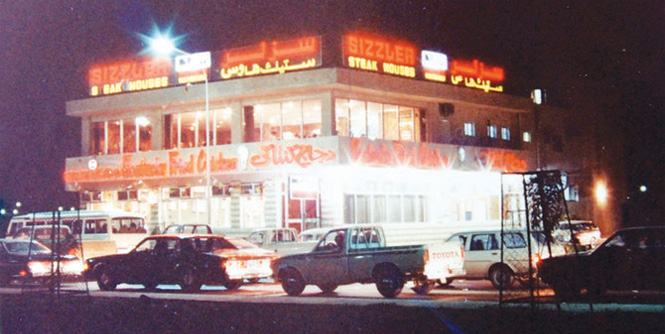 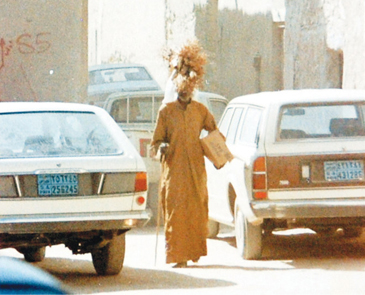 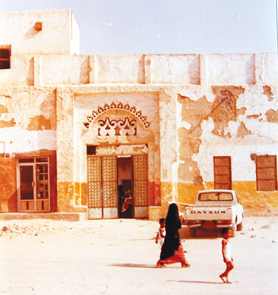 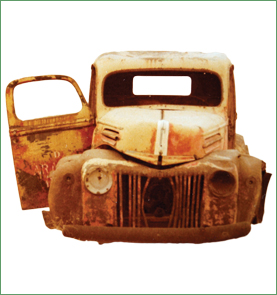 “I was looking for adventure and ready to travel the world,” Lowey told Arab News. “It was pure luck that a company wanted to hire a graduate and send me to Saudi Arabia.”

For three months, he worked for Santa Fe International, a subcontractor, before being assigned to a remote job site in Abqaiq. “We were building gas and oil-separation plants in Ain Dar and Shedgum,” he said. “The plants we built at that time still had flare shacks to burn the separated natural gas. Aramco’s gas-gathering program would begin 15 years later.”

As a project control engineer, Lowey was responsible for monitoring the progress of construction and scheduling work to be completed to a strict timetable. 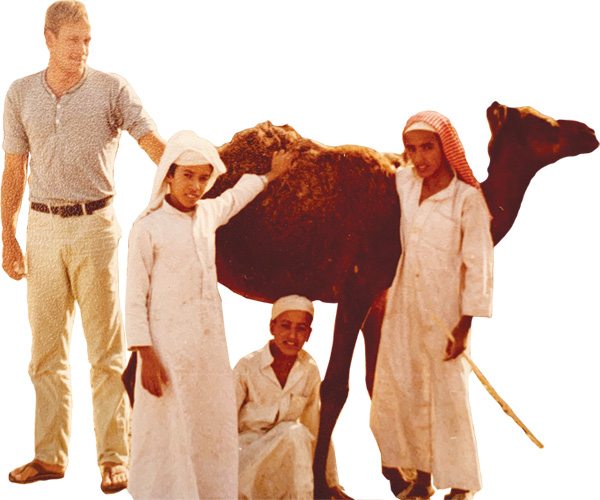 With no direct flights at the time, Lowey’s journey to Saudi Arabia took more than 24 hours, with connections in Atlanta, New York and London before arriving at today’s King Abdul Aziz air base, formerly known as Dhahran International Airport.

Fresh off the plane, Lowey was uncertain where to go as crowds of passengers crowded the airport. He walked into the arrivals hall where he spotted a man holding a sign bearing the company’s orange-colored Santa Fe International logo.

As the two men waited for other employees to arrive, Lowey observed different nationalities from the Arab world passing by. While some women were covered in black, others wore trendy, colorful clothing.

“At Dhahran airport for the first time, I saw women wearing all kinds of clothes — modern and traditional. Many had niqabs (a piece of cloth that covered half of the face, revealing only the eyes). I think it was a time before wearing the niqab and hijab became a common trend,” he said.

Days before his trip, Lowey took time to study and learn about Saudi culture, history and its people. He found it fascinating that some Saudis lived in tents out in the desert. “It was the romantic version of the Arab culture I was expecting,” he said.

Lowey lived in the Abqaiq contractors camp, in a single room in a prefabricated modular building across the road from the Aramco community, where thousands of men from different countries worked for contracting companies supporting Aramco were housed. 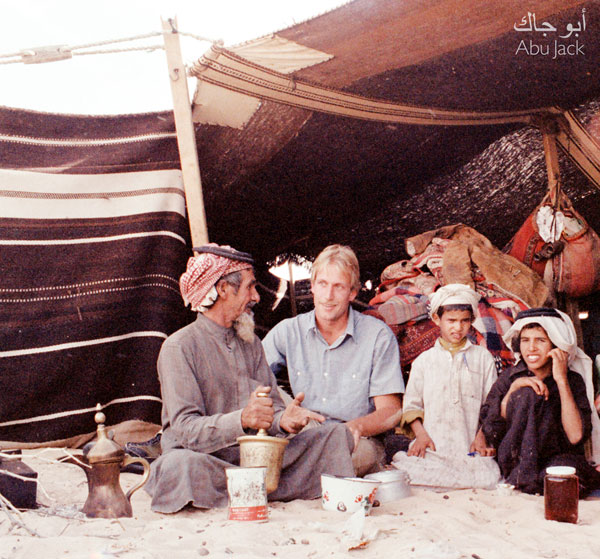 Mark Liwey with with Abdulhadi Alsyari and his sons in their desert encampment in Fazran. (Courtesy of Mark "Abu Jack" Lowey)

“There were Americans, Canadians, British. Other workers were from Thailand and the Philippines. There were Somalis and Egyptians. There were very few Saudi workers,” he said.

Living in the eastern deserts, Lowey wasn’t oblivious to events occurring in the region, but he recalled one memory that still stands out for him. “I was in Abqaiq when the shah of Iran fell in 1979. One American friend had fallen in love with a young woman from Tehran and was in Iran at that time. He had to leave his fiance and run away, over rooftops, to escape the ayatollah’s guards. He escaped back to Saudi, somehow. Much later, the woman was able to join him in the US and they were married.”

Since 1979, the trend has been toward more traditional and conservative dress for women in the Middle East, he said.

“The Arab Spring in 2010-11 further accelerated the trend toward conservatism. Only now are we moving toward a more progressive Middle East.”

Growing up in California during the 1970s, life was easy and there were fewer rules. Arriving in Saudi Arabia, Lowey knew that there would be restrictions. He was worried that local people might dislike him and question why he was here — that feeling of discomfort familiar to those living in a foreign country. 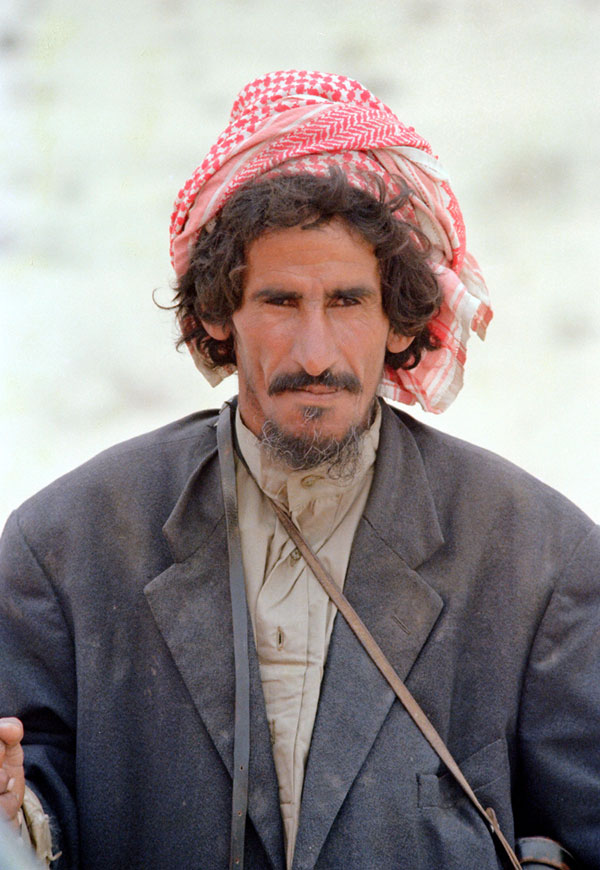 The Mystery Man in Blue: Bathan Mohammed Al-Ulayan Al-Marri, one of the Eastern Province's most famous water-well driller, responsible for finding more than 50 wells in the EP and Rub’ Al-Khali.

Lowey had a friend, Rob Hardesty, who was in Alkhobar working for an irrigation company. Lowey looked him up, and found that he, too, was interested in exploring and meeting local people. “He introduced me to some of his Saudi friends and helped me get acquainted with the Kingdom.”

On one of their days off, the two men decided to venture into the desert in Hardesty’s pickup truck to test a new camera, an Olympus OM-2, which Lowey had bought in Alkhobar’s electronics souq.

“Both Rob and I were keen to become good photographers. We wanted to go out on weekends and experiment and take lots of photos,” he said.

Photographing people was not a simple matter, since some Saudis were not open to being photographed. The duo were discreet, however. With the Olympus hidden in a large bag, Lowey would take a picture and then quickly hide the camera from sight. “One time, my friends and I were in the women’s

market in Hufof looking at some of the objects on display. I would say, ‘Hey, Rob, smile,’ and pretend to take a picture, but would photograph the woman behind him.

“We were probably a bit reckless, and if we had been seen by police or the Mutawa (religious police), they would object,” he said. “But I hardly saw any religious police in the Eastern Province during the 1970s. They were more common during the early 2000s.”

Lowey wouldn’t have his photos developed in the Kingdom. Instead, he sent rolls of film out with friends going on vacation to the UK, US or Far East, and they would bring back prints. “Imagine the difference between seeing your photos on a digital camera or iPhone instantly. In 1978, I had to wait weeks to see my prints.”

After working for two years in Saudi Arabia, Lowey took 12 months off to travel, including a trek in Nepal and India, and visits to Australia and New Zealand, before returning to California in 1981.

“After living in Saudi and my Asia walkabout, I was changed. I had incredible experiences. I had met and become friends with people from so many different cultures.

“I thought of Saudi Arabia a lot. I loved my photos of the places I had visited and, especially, the pictures of the Bedouin.”

Lowey stayed in the US for five years, got married and then, as a newlywed, moved to Kuwait for a new job. He spent three years working in Kuwait, and his first son, Jack, was born there. In 1988, Lowey and his family left Kuwait and returned to the US.

Lowey never thought that one day he might return to Saudi Arabia. But his final project before retirement brought him back to the place where he first started working. In 2013, three decades after leaving the Kingdom, Lowey landed in Dhahran.

“My last project was representing the Projects Department as OE (Operational Excellence) representative and implementer. Starting in 2015, Aramco began using OE principles and methods to improve quality and reliability in the company,” he said. 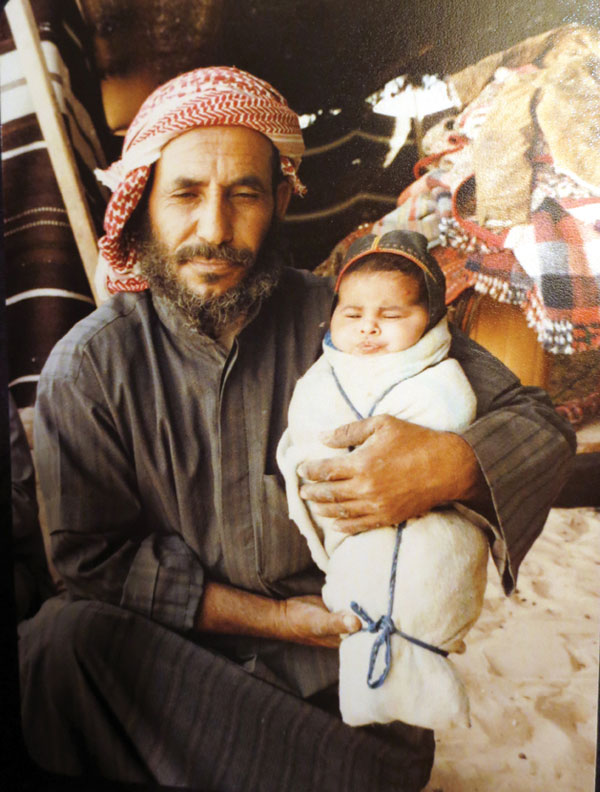 Faleh Al-Hamra, renowned in Abqaiq as a “camel whisperer,” with his first-born son Bdah, swaddled according to Bedouin tradition. Bdah, now 41, is a shift supervisor at Aramco’s Shedgum gas plant. (Courtesy of Mark "Abu Jack" Lowey)

During his time in Aramco, there were Bedouin families who lived near his job site. Lowey enjoyed watching them and was keen on getting to know them. “I frequently met Bedouin, either passers-by traveling on the migration routes, or families who camped for extended periods near the site, attracted by Aramco’s permanent water supply,” he said.

His brief encounters often involved nothing more than a simple wave, a smile and the traditional Arabic greeting.

“It wouldn’t be long before my minimal abilities in Arabic would be put to the test. I would soon embark on a lasting friendship with two Bedouin tribes — a friendship lost and rediscovered more than three decades later.”

Lowey returned in 2013 and again in 2016, and was reunited with the some of the same families that he befriended in the late 1970s.

“They were just overwhelmed with joy that I remembered them. I took the effort to become friends with them again, and they welcomed me as a brother and as a son. I am part of their family. They honored me with the title Abu Jack (father of Jack). I love the name.”

After returning to the Kingdom, Lowey saw how much the Bedouin culture had changed. “The big difference has been the nomadic lifestyle. It has disappeared now, pretty much.”

Lowey said that living and working in the Kingdom during the 1970s would have been similar to the Old West in America during the 1800s. “A young guy like me, as a graduate, I could easily go and find work and make business as there were fewer regulations. I could succeed, learn a lot, and contribute to the economy and society,” he said.

When Lowey and his wife visited Saudi in March this year for an Aramco expats reunion, he was able to witness the changes first-hand, including women driving, greater public freedoms, and the return of music and theater.

“We had been following the progress initiated by the late King Abdullah and Crown Prince Mohammed bin Salman. It is refreshing, and we hope good and positive progress continues,” Lowey said. 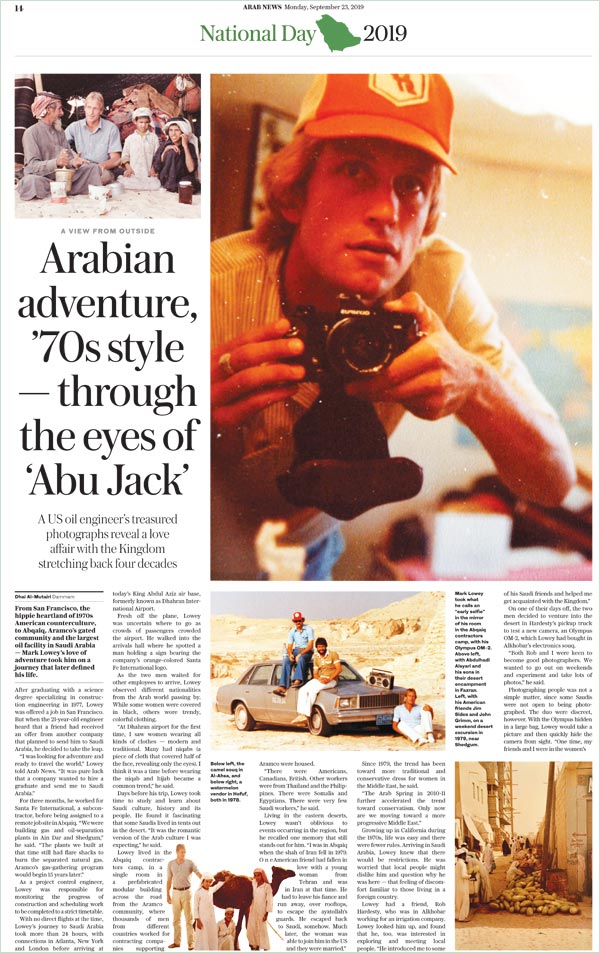 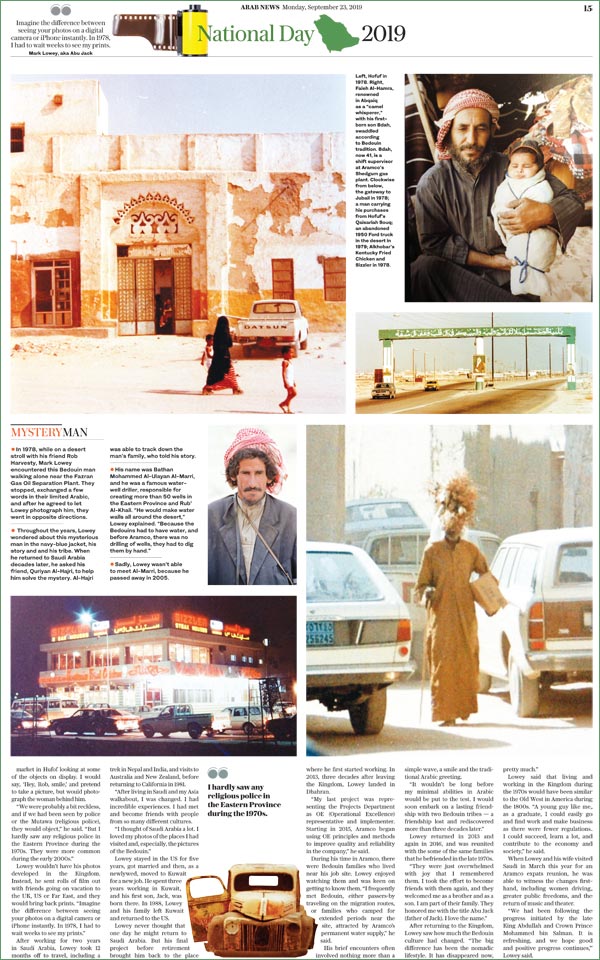