The outdoor Lightning Show was just one of scores of activities hosted by the King Abdulaziz Center for World Culture as part of Sharqiah Season 2019.
More than 80,000 visitors came to the iconic Dhahran cultural center during the March event. (Photos: Ahmed Al-Thani/MPD)

Dhahran — ”An amazing, amazing, amazing show, literally amazing,” said Rayan AlDawas, one of the visitors at the King Abdulaziz Center for World Culture (Ithra), describing the Spheres Performance at the Lush Garden. “This is al-Khobar. There have been a lot of changes; there are beautiful things happening. Honestly, it is honorable.”

Sharqiah Season 2019 wrapped up Sunday. The festival — the first of the Kingdom’s 11 scheduled festivals in 2019 — is the biggest cultural event to be held in the Eastern Province, featuring more than 80 events covering culture, education, and sports.

Amin Nasser, Saudi Aramco president and CEO, thanked “all company organizations that contributed to this success — in particular to Corporate Affairs for playing a key role, and especially Ithra for curating and selecting world-class programs that inspired creativity as part of the Sharqiah Season.” 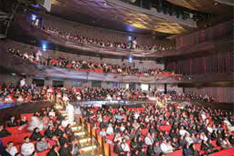 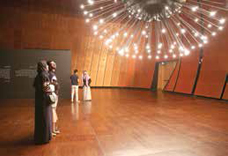 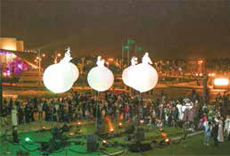 55 countries have hosted Strange Fruit’s Spheres performance, and they have played at over 500 international festivals. 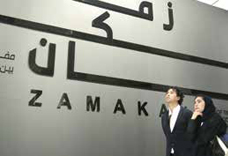 18 pieces of art were featured at the Zamakan exhibition

“Zamakan: Notions of Time and Space Complexity” — the latest contemporary art exhibition — opened at the Ithra Museum last week, featuring the work of 11 Saudi and Saudi-based artists at its Funoon Gallery.

Alofi’s brother, Abdulmajeed Alofi, said: “Although Moath is my brother, we were not aware of this. He made it a surprise for us. It is a nice surprise and a nice feeling as well, as I used to be an architectural engineer at this Center, and now my brother is showcasing his work here.

“Ithra is a very beautiful place, and I am very proud his work is displayed here,” he added. “Moath always goes to places and discovers things that we wouldn’t imagine exist in the Arabian Peninsula, and he deserves to showcase his work in Zamakan. I am very proud of him.”

“The artwork is mesmerizing. I am impressed,” said Omaima, a Zamakan visitor. “I know the young Saudis have it in their ability to be creative, and to see their work displayed here is amazing. So I am not surprised, but I am impressed.”

A Van Gogh interactive exhibition also opened at the Ithra Museum as part of the event. The story of Van Gogh was brought to life in an interactive way through an actor who narrates the story with images projected on the walls.

“It is amazing to see Van Gogh here in Saudi Arabia. His story is sad, however, and very influential,” said Joud Courtright. “I am glad Saudis have the opportunity to come and see his work. I am very happy to see his work being recognized.

“I love his painting, and my favorite is Starry Night. The strokes of his paintings are amazing. I love to follow his color techniques and painting strokes — it is how I like to paint,” Courtright added. 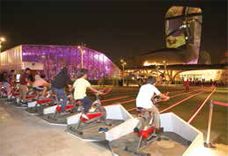 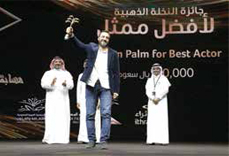 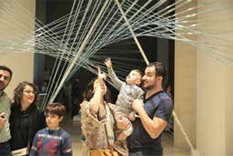 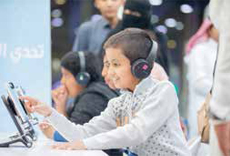 “The Leonardo Di Vinci exhibition is one of the things that makes you appreciate the science in art, which you do not see much often,” said Mona AlJalhami. “What is beautiful in this installation is that it affects the way you see the light, and when you see it, you want to know about it, so you go and read and then find out that there is science behind it all.”

Spheres in the Lush Garden

Strange Fruit performed the beautiful Spheres at Ithra. Having performed in 55 countries and at more than 500 international festivals, well over 5 million people have seen the performances.

In collaboration with the Saudi Arabian Society of Arts and Culture in Dammam, Ithra also hosted the Fifth Saudi Film Festival. The six-day event brought together producers, directors, script writers, actors, and other members of the local and international film industry to accelerate the development of the nascent Saudi film industry.

During the week, nominated movies from Saudi and around the Gulf were screened. Four competitions were held, including narrative, documentary, student films, and nonproduced scenario competitions.

Ithra’s Lush Gardens hosted the first Fitness Challenge. Visitors pedaled stationary bicycles and exercised to produce as much energy as they can.

“I think it is a really nice event, because it promotes fitness, and I love challenges,” said Jumana, a Fitness Challenge participant.