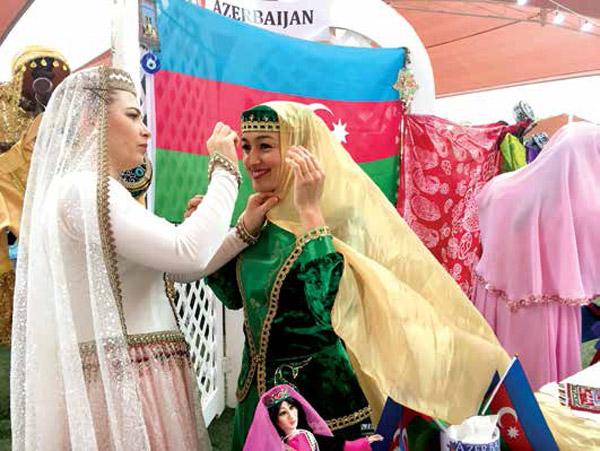 Alyona Bagirova (left) helps Asmar Eyvazona put on a hairpiece as part of her costume in
representing Azerbaijan at the International Day celebration at Dhahran Hills School. (Photos: Ching Yeh)

Dhahran — Dhahran Hills School launched its first International Day fair to celebrate the diversity of the student body, drawing more than 3,000 visitors. Each of “51 nations” that participated in the fair showcased its characteristic, uniqueness, and culture through food, costumes, posters, artifacts, languages, games, dance, art, and decorations on Feb. 27.

The outdoor festival at the school’s covered playground was organized and executed for the first time by parents, said Sadia Yousufi, a mother who led a team to prepare for this event starting in October last year.

“We cover countries from five continents, except Antarctica,” said Yousufi. “This is an international community,” said a father of a boy and a girl in traditional Korean costumes. “People are proud to exhibit their culture and share it with each other.”

The number of visitors was a tenfold increase of what the school had expected. “It feels surreal. We had only expected some 300 to 400 visitors. The turnout far exceeded our expectation,” said Tabitha Pugh, who is a teacher, parent, and another one of the organizers. 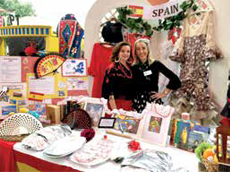 Teresa Munoz (left) and her friend Katia Elices were dressed in traditional attire from Spain for the International Day. They put out art, instruments, books, and food at the table to represent Spain. 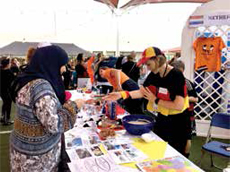 Silke Port, a parent from Germany, is ready to serve a traditional dish from her country to a visitor at her table representing Germany and the Netherlands. 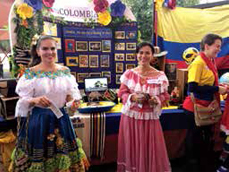 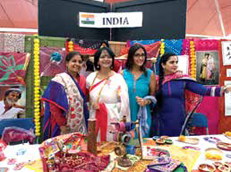 (From left to right) Sayeeda Waheed, Tapoti Neogi, Roshmi Dalal, and Zaiba Riaz stand behind a table with a colorful display of arts and crafts from India.

“It’s a community effort,” said Peter Cunningham, a teacher who was also a member of the organizing team. “We put out the tables and the parents did the rest.”

Eye-catching costumes donned by parents and children of different cultures stood out at the fair where students learned to fold Japanese origami, use chopsticks, write Chinese calligraphy, play Malaysian marble games, speak French, Tagalog, and others.

“The parents here have taken the event to another level. Everything they prepared is so authentic,” said Mina Rome, a thirdgrade teacher. “The turnout indicates that it should become an annual event.”

Sampling food from each country was everyone’s must-do activity while a food truck and a shawarma stand were there to top up visitors’ stomachs. “We want to make sure people are fed because it runs through dinner time,” said Pugh.

“It’s a great event, very well organized. Almost all the countries participated in this with lots of support from parents,” said Aadil Nabi, a father of three children. 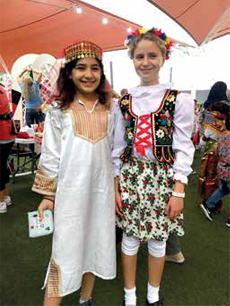 Mona Najjar (left), dressed in a traditional Lebanese outfit, and her friend from Poland, Kalina Sliz, pose for a photo at the International Day. 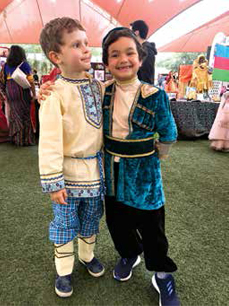 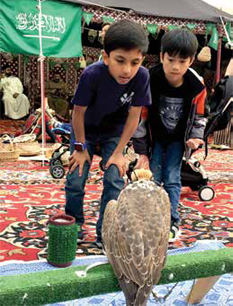 Tanner Wong (right) and Danish Malik gaze at a falcon perched on a stand as part of the Saudi Arabian cultural display at the International Day. 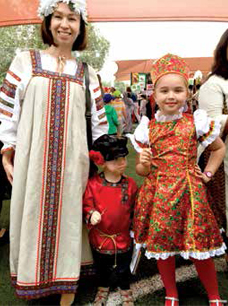 One special area was carved out to display the culture of Saudi Arabia, sponsored by the Community Services Department. Inside the tents, the department provided activities such as Henna design, an introduction to the sport of falconry, Arabic calligraphy, arts and crafts display, traditional cuisine, demonstration of flat bread making, weaving, dance, and a photo booth.

“Saudi has the biggest display. If there were a contest between each nation, they are going to win,” said Nabi.

Industrial Security officers were there to campaign for safety awareness while a special search unit introduced two K-9 dogs and explained their work to the children.

The officers demonstrated how they operated drone cameras to take pictures from mid-air and the gadgets they use when they were on duty. The two K-9 dogs received non-stop attention from many children who watched the canines performed “cool tricks.”

Other than the outdoor activities, a lineup of indoor performances were held in the school gym, including a Bollywood dance, a Latino performance, choirs, and a parade with children carrying different national flags.