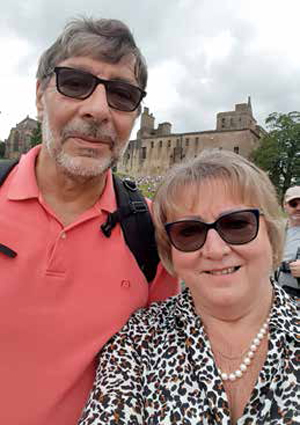 George Williamson and his wife, Hanna, recently bid farewell to the Kingdom after nearly two decades. In the near-term, the couple plans to attend a number of family celebrations in both Scotland and Poland.

Dhahran — George Williamson recently bid farewell to Saudi Aramco after almost 20 years of service. Williamson, who began working for the company in August 2000, served in a number of roles for both Saudi Aramco and Johns Hopkins Aramco Healthcare (JHAH) over the years.

Among his many jobs, George worked as a Quality Improvement adviser for the Dhahran and Jiddah areas, a Remote Area Clinics Group leader in Dhahran, a disaster response coordinator in Dhahran, and the emergency preparedness coordinator of JHAH’s Office of Emergency Management — a role in which he provided Kingdomwide disaster response capabilities for all of Saudi Aramco’s Industrial Operations.

While working for Saudi Aramco, the most rewarding aspect of Williamson’s career was working with field experts from the company’s emergency services and support organizations to ensure all employees have a safe working environment.

His efforts were carried on through to many disaster drills, extra safety training for employees, and other safety activities in which he was fully engaged. Williamson’s work was core to the Saudi Aramco value of Safety, and through his active participation in his duties and inclusion of others, he truly felt he was a valued member of the Saudi Aramco family.

“We in Medical Services had the opportunity of making a significant difference to Saudi Aramco disaster and emergency response delivery as part of a world-class team,” said Williamson.

Williamson, along with his wife, Hanna, his daughter (Hania, who is an art lecturer), and his two sons (Alan, an engineer, and Martin, a pharmacist), now enjoys more time with his family back in Scotland. The couple has also been blessed with five grandchildren, Eva, Olek, Zuzia, Oscar, and Arya.

There are several hobbies Williamson plans to carry over from Saudi Arabia to his home country, including visiting with friends, swimming, walking, cycling, and playing bridge in his free time, while his wife shares the similar pastimes of socializing with friends, traveling, cooking, and playing bridge. When he lived in the Kingdom, Williamson also enjoyed participating in the Dhahran Theater Group’s activities.

Through retirement, he now plans to attend a number of family celebrations in the short-term — both in Scotland, his home country, and Poland, his wife’s motherland. For the future, the couple intends to travel around visiting home countries of many of their friends and colleagues with whom they have built solid friendships to learn more about different cultures and customs, as well as experience the many national dishes and food they have heard so much about.

Throughout his career, Williamson enjoyed touching the professional and personal lives of many, and always approached every day with a smile on his face and professional collaboration and teamwork in his heart.