Excerpted from the March/April 2020 edition of AramcoWorld magazine. To read more AramcoWorld stories, download the newest version of the AramcoWorld App at the Apple App Store and on Google Play. 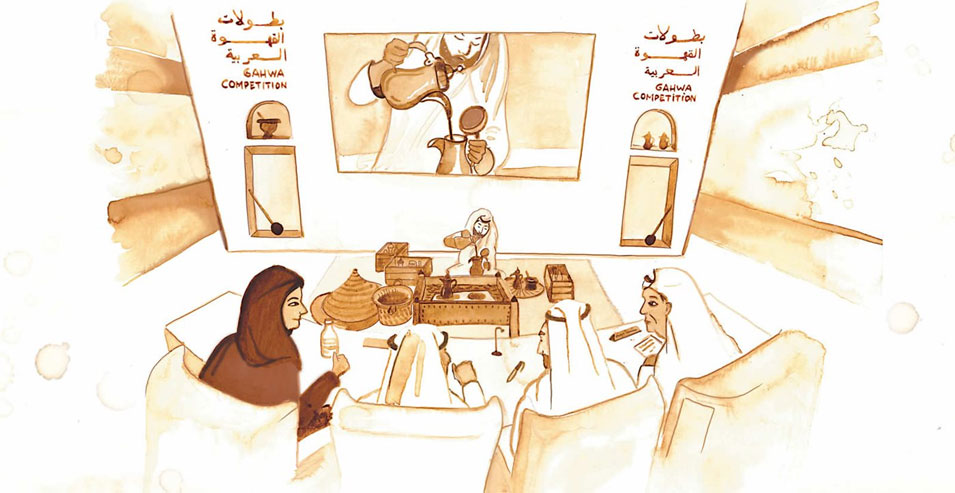 Zayed al-Tamimi of Iraq competes before the panel of judges at the inaugural Gahwa Championships in December in Abu Dhabi.

As Zayed al-Tamimi’s brass pestle hits the mortar, its rhythmic clink resounds with the crunch of coffee beans through the hall of the Abu Dhabi National Exhibition Centre. On a display screen above him, closeups of his motions attract the eyes of coffee professionals and enthusiasts. Watching most closely is the panel of four judges.

Al-Tamimi has traveled from Iraq to the capital of the United Arab Emirates (uae) to compete in the first-ever Gahwa Championships, held in December. He is preparing a signature pot of gahwa—the Arabic word for coffee—as he vies for honors in the category of Sane’ Al Gahwa, (literally, “Maker of the Coffee”). As he drops thick pods of cardamom and delicate threads of saffron into the mortar to crush with the beans, he fuses all he has learned about centuries-old Arab coffee-making.

A later competition includes Dubai barista Louie Alaba, who offers the judges his cold-brew “gahwaccino” that uses fig, chili and cinnamon. As the competitions hit a stride, attendees discuss the importance of coffee-making across the whole of the Arab world, and how it is not just a matter of a dark- or light-roast beverage served with optional sugar and milk. Arab gahwa is a ceremonial affair, each pour symbolic of the historical and social significance of coffee drinking and an embodiment of hospitality. Coffee is synonymous with Arab hospitality.

In the UAE, 1-dirham coins pay homage to coffee culture by showing gahwa’s most time-honored symbol, the dalah, or the traditional Arab coffee pot, with its wide, stable bottom, elongated handle, finial lid and gracefully thin, beak-like spout. Across the Arabian Peninsula, it is not unusual to see a giant-sized dalah erected as public art in the middle of a traffic roundabout.

Gahwa is a ceremonial affair in which each cup is infused with history and social significance.

In his 1982 poem “Memory for Forgetfulness,” the late, celebrated Palestinian poet Mahmoud Darwish described the first cup of morning coffee as the “mirror of the hand.” He continued: “And the hand that makes the coffee reveals the person that stirs it. Therefore, coffee is the public reading of the open book of the soul. And it is the enchantress that reveals whatever secrets the day will bring.” 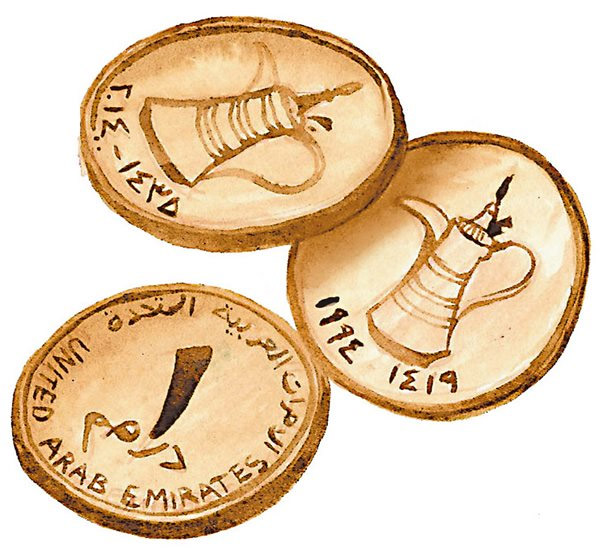 The traditional pot in which gahwa is served to guests is the dalah, whose long, narrow, curved spout, thin handle and finial-topped lid have made it a popular, nearly universal symbol of hospitality throughout the Arabian Peninsula. In the United Arab Emirates, a dalah appears on the 1-dirham coin.

So important is gahwa in the Arab world the United Nations Educational, Scientific and Cultural Organization (unesco) included gahwa in the uae, Saudi Arabia, Oman and Qatar in the agency’s 2015 Representative List of the Intangible Cultural Heritage of Humanity. The designation recognized the value of preserving the historical customs and traditions of coffee drinking in these nations.

Eid Bin Saleh Al Rashid of Saudi Arabia’s Royal Hospitality House Group, and one of the supporters for the unesco designation, emphasized coffee’s importance for the future of culture in his country, “given its symbolic meaning for national identity and in order to preserve and pass this element to younger generations.”

In the desert at the eastern edge of the vast Rub’ al-Khali, heritage guides Waesam Fathalla and Ali al-Baloushy are doing just that. They share centuries-old coffee traditions with tourists, in much the same way their tribes shared with visitors centuries ago: out under the stars, sheltered by a tent, sitting with friends on floor cushions.

Like all good gahwa, they begin with green, unroasted Arabica or robusta beans. Over a makeshift pit of hot coals and sand, Fathalla roasts the beans in a shallow, circular pan with a handle long enough to keep his hands safely away from the fire. The beans bounce back and forth revealing a golden-brown shade and a faint floral aroma. Fathalla explains that while Saudi tradition favors light, blonde roasts, Emirati purists favor darker roasts. Once the beans are ready, they’re removed from the fire and ground into powder using a mortar and pestle. Water boils in a dalah, and nutmeg, clove or cinnamon is added before the coffee. 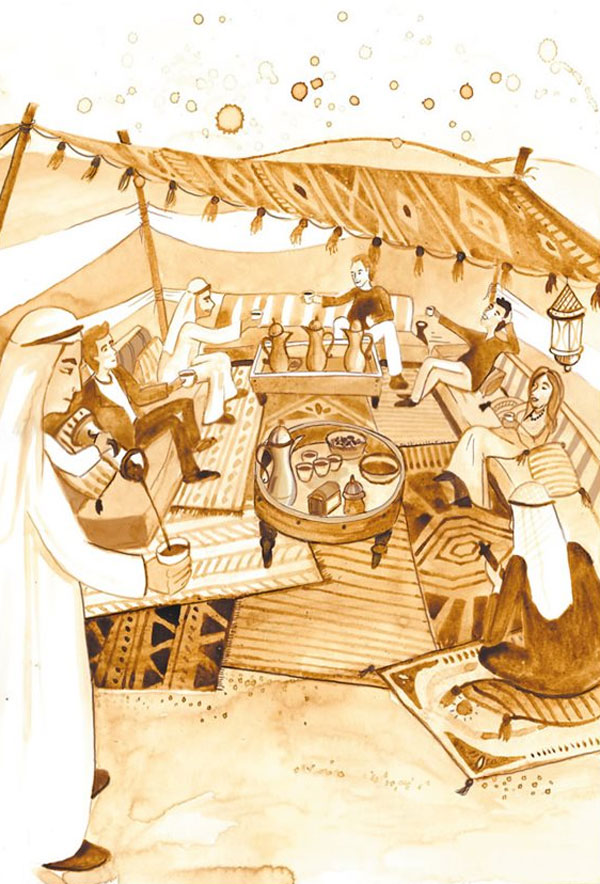 Visitors receive a welcoming cup of coffee; simply placing a dalah atop a fire pit is invitation enough for anyone to join.

Visitors receive a welcoming cup of coffee; simply placing a dalah atop a fire pit is invitation enough for anyone to join.

“Emiratis don’t use too many spices in their gahwa. That way, the natural flavor of the coffee can really come through,” Fathalla says as he grinds the coffee beans.

Throughout the centuries, coffee has been a unifying drink, something to do with family and friends old and new. The spices and flavoring in it can signal one’s economic status, level of respect for a guest, or both. Coffee recipes with saffron and rose water demonstrated wealth and regard for a guest most clearly.

He adds the coffee powder to boiling water and leaves it to bubble for a few minutes. Then he removes the dalah from the heat and allows it to rest, so the coffee grinds settle at the bottom. He then pours from it into another dalah with a filter, and then again into a smaller, ornate serving dalah.

In addition to its 2015 recognition of gahwa in the uae, Saudi Arabia, Oman and Qatar, the United Nations Educational, Scientific and Cultural Organization (unesco) has recognized the cultural significance of coffee traditions in several other countries, too, including Ethiopia, Turkey and Colombia, and Italy is currently short-listed for future inclusion.