From Concession to IPO, Aramco Marks 87th Year on its Journey of Excellence 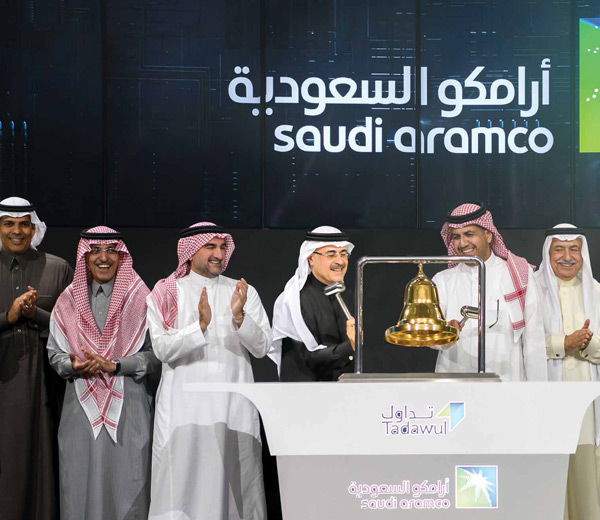 From 1933 to present day, Aramco’s remarkable journey from an exploration effort to the world’s most profitable company has been unprecedented, and it began with the signing of the Concession Agreement.

It is said that every journey begins with a single step. For the company that would become Saudi Aramco, that single step was the signing of the Concession Agreement at Kazam Palace on the outskirts of Jiddah on May 29, 1933.

Becoming effective on July 14 of the same year, the signing launched the company’s remarkable advance on history, allowing it not only to become a major international force, but to eventually become the world’s most valuable business. And while the signing of the agreement was historic, the importance of the event pales in comparison to what transpired since that day in 1933 and today — a path of unparalleled growth and development that not only helped Saudi Arabia realize the bold vision of King Abdulaziz, but also continues to help the Custodian of the Two Holy Mosques, King Salman, today realize the ambitious Vision 2030.

May 29, 1933, concession is company birthday: the signatures that started it all

The principal characters in the second great drama of the 20th century in Saudi Arabia (the first being the unification of the Kingdom under Abdulaziz Al-Saud) gathered in Jiddah in February 1933.

Today, 87 years later, it’s easy to forget that the outcome of the final scene was unknown to the actors at the time. They came together to negotiate the opening of the Kingdom to oil exploration, and this they accomplished, after intense labors.

The cast of Saudi players included Shaikh Abdullah Al-Sulaiman, the Minister of Finance and the second most influential man next to the King. Acting on behalf of Standard Oil Co. of California (Socal) were Lloyd N. Hamilton, 40, a lawyer and land-lease expert; Karl Twitchell, a mining engineer who in 1931-1932 had scouted for water and mineral resources, including oil, in the Kingdom; and Harry St. John B. Philby, unofficial adviser to Abdulaziz beginning in 1917 and a resident of Jiddah since 1925, now also under contract with Socal to act as liaison.

The Hamiltons — Lloyd and his wife, Airy — and the Twitchells — Karl and his Irish-born wife, Nona — arrived in Jiddah on Feb. 15, 1933. The Twitchells were among the handful of Americans with any experience or knowledge of the Arabian Peninsula, and they helped the Hamiltons navigate the formalities of Saudi hospitality and culture.

Shaikh Abdullah arrived from Makkah by car four days later, and in a sign that indicated the urgency and importance of the task at hand, the first negotiations got under way that evening. The stage was set for nearly four months of negotiation.

Wallace Stegner, in his book Discovery! (Beirut: 1971), describes the critical last stages: “(The) conference and arguments went on — May 14, May 16, May 18, May 23 — with the tough bargainers Shaikh Abdullah, Fuad Hamza, (deputy foreign minister), sometimes Yusuf Yasin, always the interpreter Najib Salha. The government steadfastly ato its wish to be paid in gold and its insistence that the initial loan be repayable out of only 10% of royalties.

Socal, though it consented to make the initial payment in gold, insisted that it must be protected from having to buy further gold at premium prices in case the gold embargo persisted, and that the first loan must be repayable more promptly than 10% of the purely hypothetical royalties would do it. ...

Shaikh Abdullah Al-Sulaiman, the Saudi Arabian Minister of Finance, and lawyer and land-lease expert Lloyd N. Hamilton, acting on behalf of Standard Oil Company of California, sign the agreement that opened the Kingdom of Saudi Arabia to oil exploration.

“Wearily the duelists fought it out until, on May 29, Shaikh Abdullah signed the Concession Agreement at Kazam Palace on the outskirts of Jiddah. It became effective on July 14 by publication in the official government journal. The terms were below those which the government had first proposed, but well above what Socal considered justifiable for a mere look at a wildcat prospect. ...

“The company would begin exploration within three months and keep at it until it started drilling or gave up the concession. It would start drilling no later than three years from the effective date of the concession and drill until it gave up or developed commercial production, which was defined as 2,000 tons of oil per day. ... The agreement was good for 60 years. ...

“What Hamilton had thought might take a few weeks had taken three and a half months. After (Hamilton) had signed the agreement with Shaikh Abdullah, the Hamiltons left Twitchell to look after details and took several weeks’ vacation in southern Europe, winding up in London about the first day of July. While they were traveling, six copies of an ‘impressive piece of paper,’ in both English and Arabic, went back and forth across the ocean and received the signatures of many people. ...

“Less than three months later, the first oil prospectors arrived in Jubail, but it took two years of surveying, exploration and groundwork before the first well was drilled, in April 1935, and it was three more years before Well No. 7 produced oil in commercial quantities, in March 1938.”

The curtain had fallen on the drama of the concession signing, but another great drama was about to begin. None of them knew it for certain, but they all may have suspected it — the agreement they had just signed would lead to the discovery of the greatest energy reserves in the world and the rapid transformation of Saudi Arabia from desert Kingdom to world-class nation-state.