Exploring Rani Kot Fort in the Interior of Sindh, Pakistan 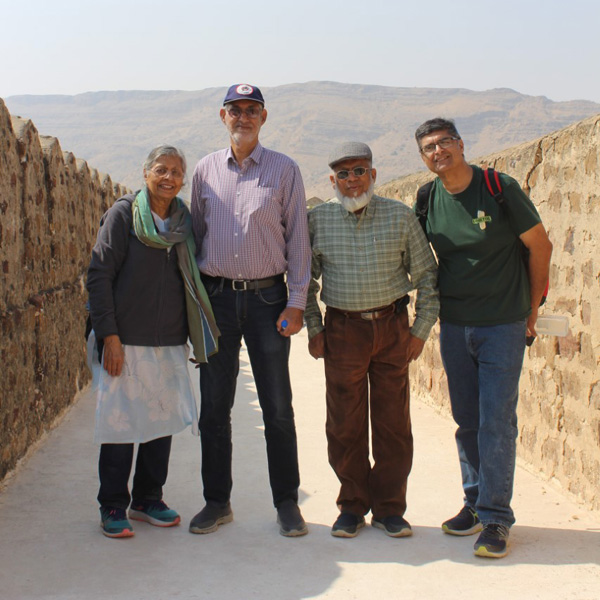 Engr. Iqbal Khan with the Californian family on the walkway of the Miri Kot

Being a dedicated engineer, I have never found the opportunity to explore our own province of Sindh, one of the four provinces of Pakistan. After retirement from Saudi Aramco, I started reading about the beauty of the interior of Sindh as a province. I learned that Sindh is an ancient civilization that goes back at least seven thousand years and it has many important archeological sites. Many are explored, however, Rani Kot Fort, which is one of the largest forts in the world, has yet to be explored. An MoU (memorandum of understanding) has been signed between Italian archeologists and the Sindh Government to allow for exploration. To date, the research is ongoing.

The historic Rani Kot Fort is a mystery. It was built on mountains of the Khirthar Ranges of Sindh. It is located about 28 kilometers from the Sann Gate from Jamshoroo City. It is believed to be the largest fort in the world having walls nearly 35 kilometers long. The age of the fort is unclear, however, archeologists predict that the magnificent structure was built sometime in the 9th-century. Visually, its walls are truly a roller coaster ride, sometimes going as high as three thousand feet above sea level while other times instantly sliding down towards the ground.

Archeologists want to ensure Rani Kot Fort gets the recognition it deserves. Its construction resembles the Great Wall of China which is why it is often referred to as “The Great Wall of Sindh.” Since 1993, it is has been on the tentative list to be designated a UNESCO World Heritage Site. Its status is still pending. Many agree that it is the most fascinating place in Sindh.

The surrounding walls of Rani Kot Fort are made from gypsum and lime cut sandstone. There are four entrance gates, namely:

Inside the fort are two small forts located at different elevations. The lower one is called Meri Kot and the upper one is known as Shergarh. Miri Kot is about three kilometers from the eastern gate, while Shergarh is a kilometer away. Both forts appear to be residential forts. To give you an idea of the vastness of Rani Kot Fort, it is so large that there is enough space in it for building hundreds of other forts. 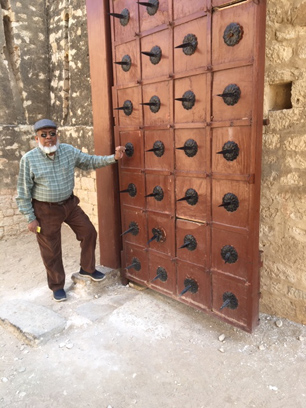 Engr. Iqbal A. Khan at the gate of Miri Kot. For safety the gate is well designed with sharp ends 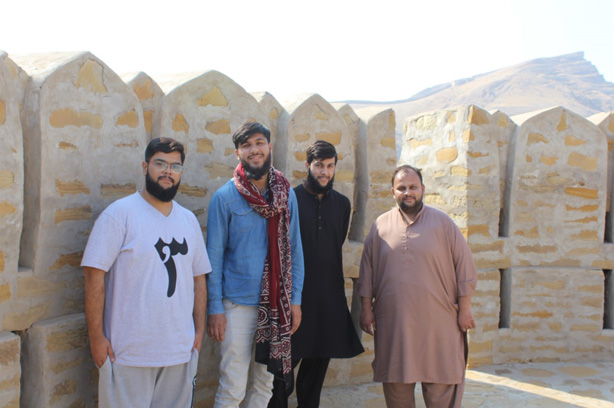 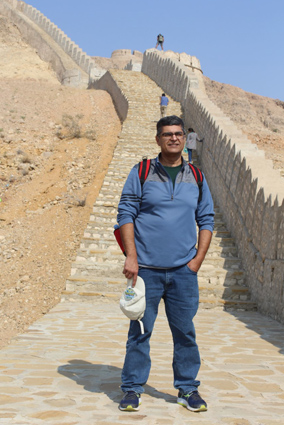 Mr. Faisal Saeed from California USA right in front of the stairs along with the great wall of Rani Kot 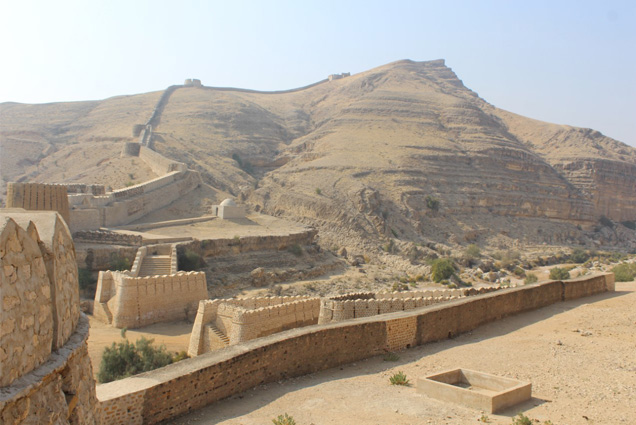 It has been determined that Rani Kot Fort was built for the purpose of defense and to house many inhabitants. The rulers of different times lived here and it was the center of political activities where many ancient leaders of Sindh gathered. Artifacts uncovered at Rani Kot tell a fascinating story of its inhabitants and a rich history that spans thousands of years. Some of the findings include archaic coins, terracotta of the Indus Civilization, an engraved sign of a swastika, a leaf of the papal tree (sacred fig); evidence of a peacock, sunflower, and lotus flower; remains of Zoroastrians and Buddhists, and arrows of different kinds.

There are three graveyards at Rani Kot Fort. One graveyard holds four hundred graves. Many of the sandstone grave markers are engraved with motifs of sunflowers and peacocks. Local residents refer to one of the graveyards as the “Roman's Graveyard.” 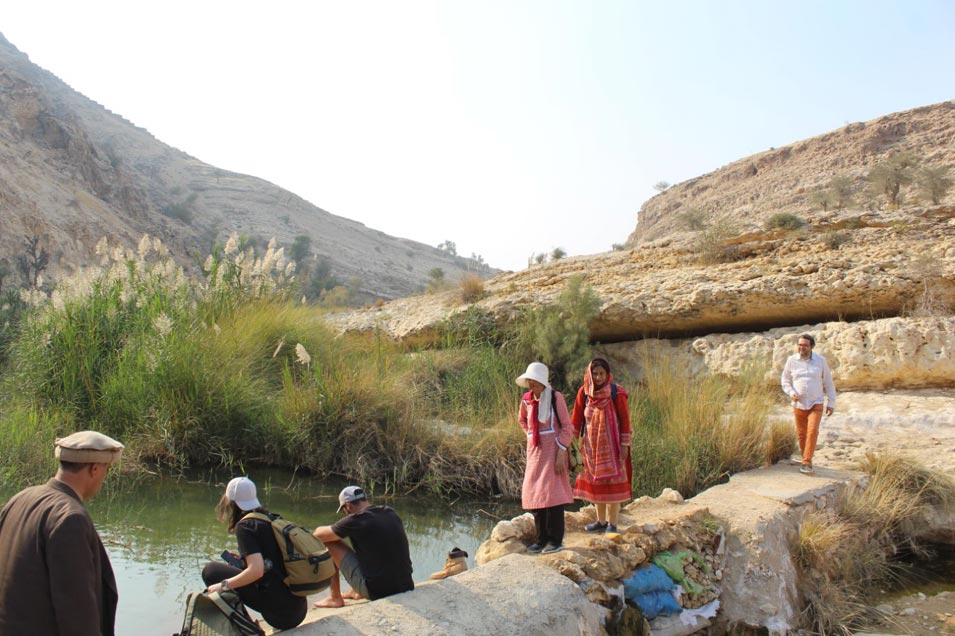 The entire fort is surrounded by hills that form a small valley through which a stream passes. Its name is taken from this stream; “Rani” meaning Stream.

The Rani Kot Fort resembles no other fort in the world. Its unusual size, lost history, strategically useless position, uninhabited area, and unexplored features make the fort one of the strangest places in the world. One would require a time machine to solve its mystery. Its unusual size and location in the absolute wilderness doesn't make sense, at least in the present times.

For those wishing to visit Rani Kot Fort, it may be helpful to know that we booked our tour with Rover Pakistan. The tour included transportation, breakfast, snacks and lunch, all at a very reasonable price. There were a total number of twenty people on our tour including guests from Karachi, USA, Australia and Syria. It was a multinational group of people traveling together. 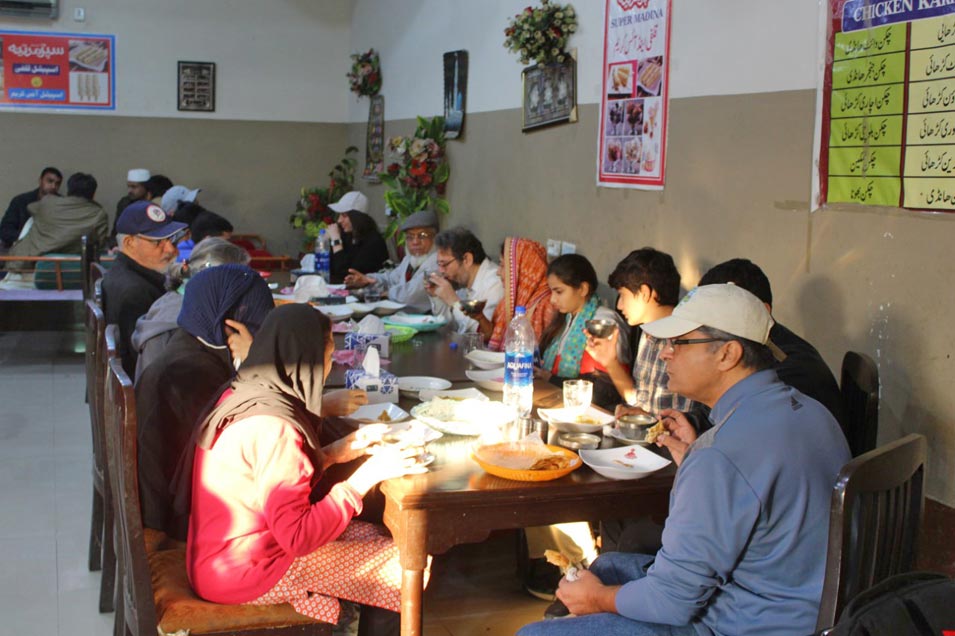 All the members of our group enjoying breakfast at Super Madina Restaurant.

Though the ride to the fort was a good four and a half hours long, despite the prolonged journey the passengers remained at ease throughout the ride due to the comfortable transportation. Breakfast was served at a Super Madina Restaurant along the highway and included a small buffet offering some of Pakistan’s standard breakfast fare: a cup of tea, Cholay Ka Salan (gravy made of beans and spices), roti, etc.

Most of the people were interested in trekking towards the freshwater stream commonly known by locals as “Pariyon Jo Tar.” But first, as soon as we reached our destination, our first inclination was to climb the stairs built along the wall of the Great Wall of Sindh. We all enjoyed our tour of the wall. A few elderly people did not try to go up the stairs and instead remained below. Later, we traveled to Miri Kot to explore inside and out of the Miri Kot Fort. From the top of Miri Kot, we had a great view of the surrounding area. From a distance, we were able to see the fourth entry gate of Rani Kot, named Shergarh. It is very high up and difficult to reach.

After visiting The Great Wall and Miri Kot Fort, we enjoyed lunch at the Rani Kot Restaurant. After lunch, it was time to trek towards the freshwater spring called Pariyon Jo Tar of Pond of Faries. It was absolutely breathtaking and a place that one must visit. 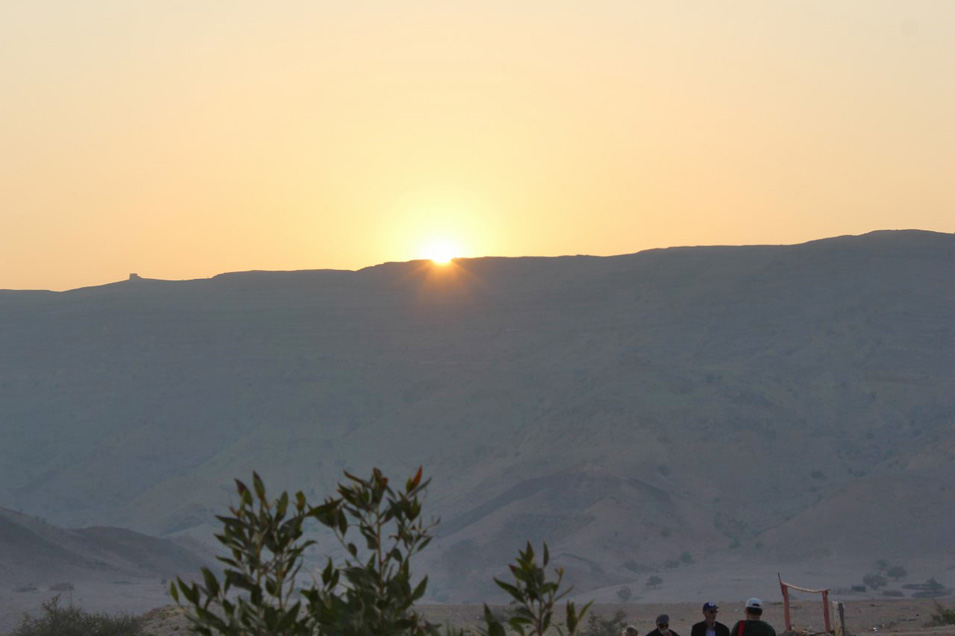 A very nice view of sunset at Rani Kot Restaurant.

Finally, upon our return trek to Rani Kot Restaurant, we witnessed a beautiful sunset marking the time for our journey back home. We enjoyed our full-day visit to Rani Kot and will try to visit once again after reading more details about the place.

Rover Pakistan is a touring company founded by some very bright and capable young men and provides a vast range of touring opportunities helping people see the immense, and mind-blowing beauty of Pakistan. For instance, one can book a tour to the mountains in the northern areas of Pakistan. Our tour manager, Mr. Asim Mashkoor, was very accomodating and shared his vast knowledge of the history of the area. I would highly recommend Rover Pakistan. 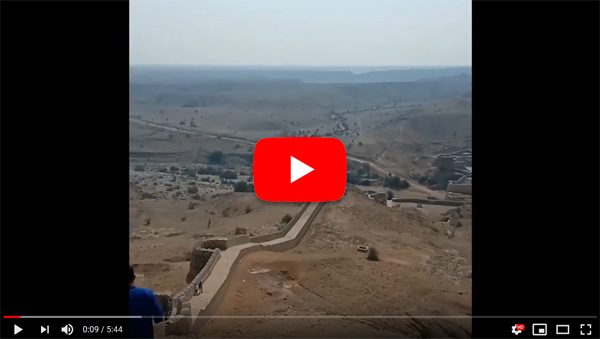 Below are links to a few videos related to Rani Kot Fort: