Producing since 2009, Khurais is home to one of the largest areas of land under Saudi Aramco’s stewardship.
The company’s SAEP- 359 procedure governs the identification of areas of high biodiversity and valued ecosystems, warranting specific protection and management.

A small white shape skillfully descends from the flame-washed summer sky of the Arabian Peninsula’s mighty ad-Dahna desert to elegantly land beside a shimmering pond in the Kingdom’s arid center.

On a 3,000-kilometer journey from northeast Europe to Africa, the migrating little egret chooses to rest at a new 8,000 m2 artificial wetland, brimming with lifesustaining water for a wide diversity of migrating birds, and resident native species.

The wetland lies within the site of one of the world’s largest oil producing facilities, Khurais, where a 38-km2 sanctuary of desert-resilient biodiversity shelters in surprising abundance have been established alongside its operating facilities. 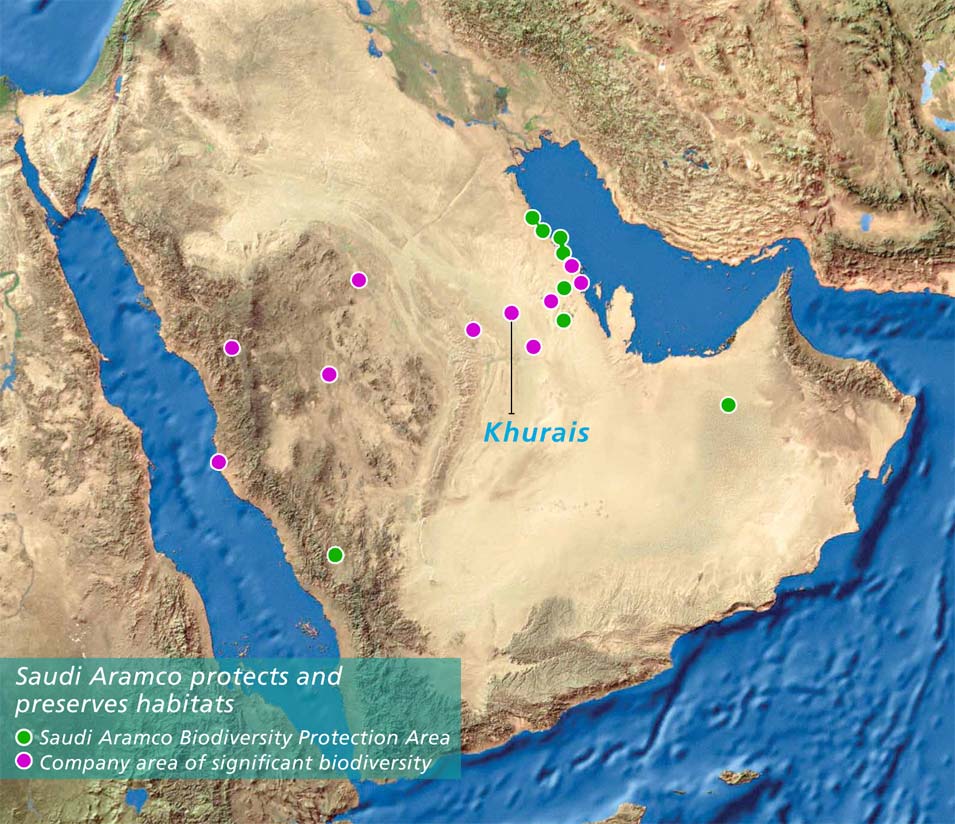 A 3-meter high perimeter fence isolates Khurais from grazing by nonnative species, such as camels and sheep. Then, when the intense summer heat shifts to winter mildness, renewing dew from the cooler temperatures bends Khurais’s brittle vegetation into a landscape that moves with green color.

One of the most precious jewels in its nature’s treasure box is the large number of birds using the site as a resting spot on their migratory journeys. EPD estimates that more than 100 bird species use the site during the course of the year, with further surveying likely to record an even wider diversity of feathered visitors. 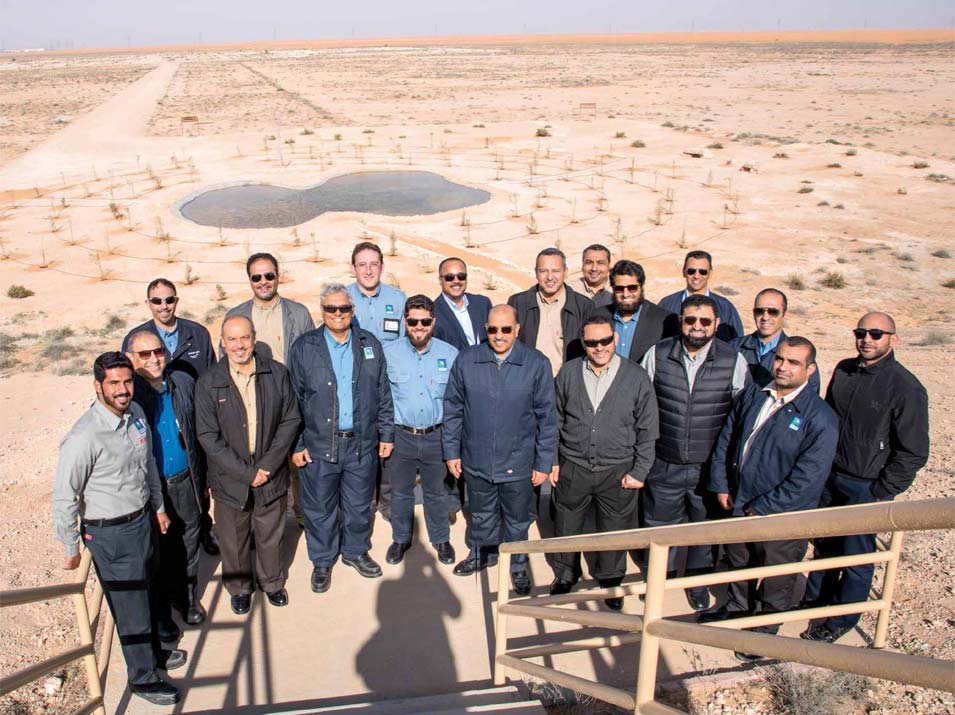 To accommodate a construction workforce for the site’s increment program completed last year, Khurais fenced an additional 30 km2, resulting in gradual biological regeneration of the area.

Khurais environmental coordinator Ayedh K. Hajri says the biodiversity and habitats of this extra area are being assessed for inclusion in the current 38 km2 preserved area.

“Life sprouted back on the sand within a few months after the expansion fence was erected in 2017,” adds EPD process engineer Sohaib B. Alhajhussein. “Grasses and other plants grew as the sand started to settle.”

Now dotted with a rippling sea of mature grasses, the roots of each bush are curtailing movement of the area’s caramel-colored sands. 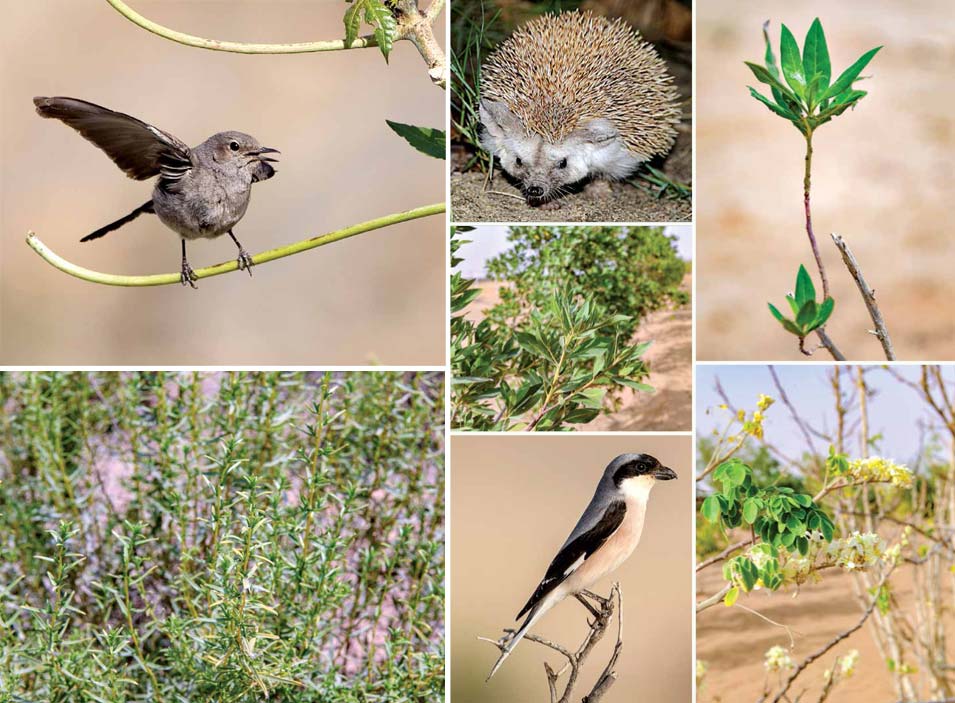 With its dry location and limited water resources, Khurais is continuously pursuing water conservation initiatives as part of Saudi Aramco’s commitment to conserve the Kingdom’s groundwater for future generations.

Khurais plans to cease the use of non-potable (non-drinkable) groundwater for plant process through the construction of a 60,000 barrels per day seawater reverse osmosis facility, planned to become operational in early 2020.

The Khurais Producing Department will plant 15,000 native trees by the end of 2019 to enhance native biodiversity, sequester carbon, control sand drift onto the roads, and create natural shade.

Reducing sand movement and desertification is a key component to Saudi Aramco’s initiative to plant one million trees, whereas KhPD will plant 15,000 native trees by the end of 2019.

As well as enhancing native biodiversity, the trees sequester carbon, control sand drift onto the roads, and create natural shade.

Khurais is evaluating the impact of different tree plantation technologies on water consumption, growth rate, and cost-effectiveness in two phases.

During phase one, implemented in 2015, a super absorbent polymer technology was tested on 3,400 trees, generating up to 50% savings in irrigation water consumption.

The positive outcome of phase one encouraged KhPD to work with the Environmental Protection Department and EXPEC ARC to proceed with phase two, which involves piloting four different technologies on 400 trees, comparing water conservation and growth rate performances, with the trial outcomes expected by the end of 2019.

“This includes deploying technologies to support water conservation measures, such as the plantation technology trials taking place at Khurais.” 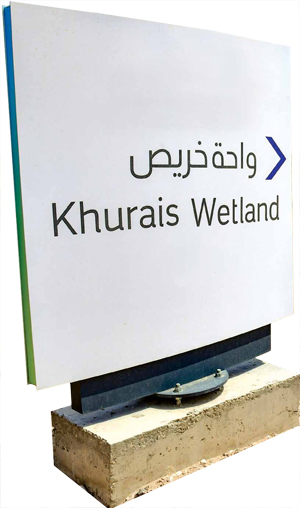 KhPD manager Mohammed I. Sowayigh says the artificial wetland was built to further protect the site’s resources and endemic species, and its trees are sustained with treated water from the sewage treatment plant.

“As our operational footprint continues to grow, so does our commitment toward a sustainable environment,” said Sowayigh. “Saudi Aramco and its Southern Area Oil Operations admin area continues to invest considerable efforts and resources into various initiatives around the Kingdom to help protect and preserve our natural environment.

“In recent years, a major focus was given to air quality and groundwater conservation, which resulted in a positive impact through the deployment of initiatives such as flare gas recovery, and a seawater reverse osmosis plant,” said Sowayigh. “This commitment has grown over the years toward preserving the biodiversity of Khurais in keeping with Saudi Aramco’s ongoing efforts toward nurturing the Kingdom’s plants and animals, which is aligned with Saudi Arabia’s Vision 2030.”