CTO Talks Sustainability and the Future of Aramco

Aramco chief technology officer Ahmad O. Al-Khowaiter speaks with Wired magazine about our strategy of reducing emissions, technology we’ve created to achieve that, and how the company will look in 50 years. 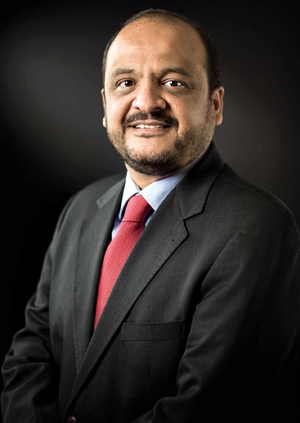 W: What is Aramco’s broad strategy on reducing emissions?

W: How much of an impact have those initiatives had?

AOK: I’ll speak about the past. This is not new for Aramco; we have been investing in sustainability in different forms. Sustainability today means, for example, a reduced carbon footprint. But in the past sustainability, for us, meant reduced environmental impact in a much broader sense.

A perfect example is our stranded gas program. In the 1970s, Saudi Aramco was the first major oil company to capture stranded gas, which was being released and burned — which was the economic, good decision at the time — and invest in new technologies that converted that stranded asset into value. That converted it to chemicals (that helped produce the feedstock that) created one of the largest chemicals businesses in the world — SABIC. That was done by taking natural gas that was flared, and investing billions of dollars to collect that gas, and then using very unproven technologies to convert that gas into chemicals.

That’s the way we look at CO2 today. We see it as a waste product that is environmentally harmful. And we would like to see it turned into a product of value, and convert it to create greater bottom-line value. And that’s why we look at ways of utilizing that CO2 waste product. We have a lot of research projects right now. One takes CO2 and converts it into polymers. And that’s being scaled up as we speak — we’re commercializing that technology, and we have products in the market today on a small scale, and we hope to scale that up, and make it larger.

W: Are any of those technologies proprietary to Aramco?

AOK: We have a number of in-house proprietary technologies that we are developing today, in collaboration with partners in many cases. With these kind of high-risk technologies, it serves us well to collaborate, and to share the burden or the risk.

(One) example is completely proprietary — the mobile carbon capture. We have pioneered the ability to capture CO2 on board vehicles, and then take that CO2 and utilize it, either in conversion to valuable chemicals, or into other uses such as cement and concrete. So those are the kind of technologies we’re adopting and developing.

Going back to the history of Aramco. We’ve captured our methane for years. And that’s actually contributed tremendously to reducing our overall carbon footprint relative to the industry. Saudi Aramco has the lowest carbon footprint per barrel in the world, at 10.2 kilograms of CO2 per barrel of oil.

W: Obviously there are some less favorable headlines in terms of Aramco being “the world’s biggest polluter.”

AOK: We take exception to that, because we don’t see that at all. Quite the opposite: we see ourselves as the world’s biggest energy supplier.

If you look at things purely in a linear sense, which is basically that we take resources, we make them into products which are consumed, and burned perhaps, and the waste product CO2 is emitted into the atmosphere — that looks like, basically, an incompatible business model, given the carbon constraints that the world has committed to. If you look at that in a linear way … then yes, you will come to the same conclusion that there is no “clean” future for oil.

But we look at it much differently; we look at it as a circular economy, which we feel has not been emphasized enough. I mentioned the circularity of methane, for example, where we take methane rather than burning it, and convert it, over the last 40 or 50 years, into valuable products. And we think that the same can happen with CO2.

W: A lot of people accuse big oil companies of greenwashing. What is your response to that, and in 50 years’ time will you have proved those doubters wrong?

AOK: I believe our environmental track record has been one of the best in the world in terms of, as I’ve mentioned, flaring and efficiency. And our carbon footprint today is the lowest in the world [among] many major national oil companies, by far — I’m not talking about 1 or 2%. … There is a huge opportunity for those best practices to be adopted by others, so that we can really have a dramatic impact on the industry’s overall emissions. We have to be part of the solution. We are the drivers of much of the world’s energy, and if we don’t take this seriously, it won’t change. If we’re not on side, the energy transformation will not happen as efficiently or as fast as it could.

W: Paint a picture of how Saudi Aramco will look in the year 2070.

AOK: We see chemicals as a huge future for us, and we see a large share of our oil going into chemicals in the next 50 years. … I believe we are also going to be big in hydrogen (and) we are going to see a much larger role for carbon capture and utilization in our industry. I think we are the best placed to do that — we have the technology, we have the talent, the people, that knowhow … We believe we are going to be part of that transformation; we are going to be a much more diversified business — it’s natural that we will be. And we still feel that there will be a large market for hydrocarbons, but they will be sustainable hydrocarbons that have to be coupled with stationary carbon capture, mobile carbon capture, and ultimately, direct air capture.