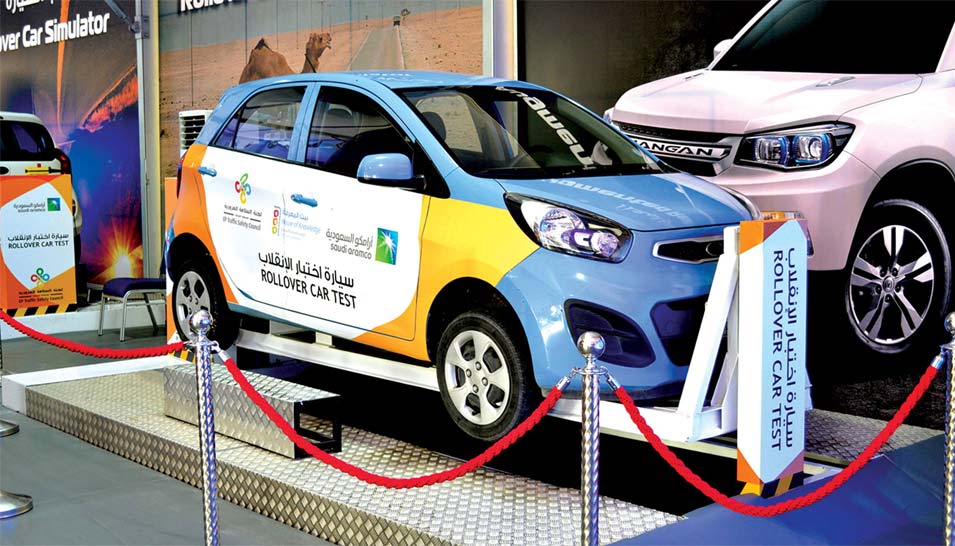 As part of its outreach at the Al-Janadriyah Festival, Saudi Aramco emphasized traffic safety. The Traffic Safety Signature Program’s exhibit, found at the pavilion of the Ministry of Energy, Industry and Mineral Resources, featured five areas dedicated to topics such as the Traffic Safety Village.

With the full support of Saudi Aramco, the Eastern Province Traffic Safety Committee provided a unique and vitally important experience for visitors during the Al-Janadriyah 33rd National Heritage and Cultural Festival.

Abdulaziz Al-Ghamdi, acting director of the Traffic Safety Signature Program in Saudi Aramco, said participation in Al-Janadriyah is expected to increase awareness on the part of drivers, passengers, and road users through awareness and entertainment programs. He said the committee participated in five separate tents: “Saad and Sarah,” “House of Knowledge,” “Glimpse of the Past,” “Traffic Safety Village,” and the “Firefighters Challenge.”

The “Saad and Sarah” presentation features a dramatic 3-D show using holograms, among the biggest in the Middle East. The scenario is based on a story — the heroes of which are Saad and Sarah — which tells the tragedy of deadly traffic accidents. The story demonstrated the grave results of recklessness that can lead to fatal traffic accidents and the need to avoid such tragedies.

The “House of Knowledge” includes a simulation of an automobile rolling and the seat belt convincer. It also featured questions designed to increase traffic safety awareness for visitors. A third tent, “Glimpse of the Past,” reviews the history of Saudi Aramco’s attention to traffic safety, featuring the new driving school for women and the history of defensive driving training within the company. The booth included an old Kenworth truck, used by the company for carrying heavy equipment.

A fourth presentation includes the ”Traffic Safety Village,” which works to entrench traffic safety in the minds of children by enabling them to drive small cars inside a special track where they observe traffic regulations — combining both education and entertainment. Eventually, the children obtained a symbolic driving license, which encourages them to observe traffic regulations by fastening seat belts and crossing the street from areas designated for pedestrians, and other traffic regulations and laws, as well. The ”Firefighters Challenge” area gave visitors a glimpse of the physical strength required of firefighters and the need to respond quickly to incidents. The presentation was designed to help raise awareness of how difficult it is to be a firefighter, and highlight the noble deeds they perform to protect lives and property.