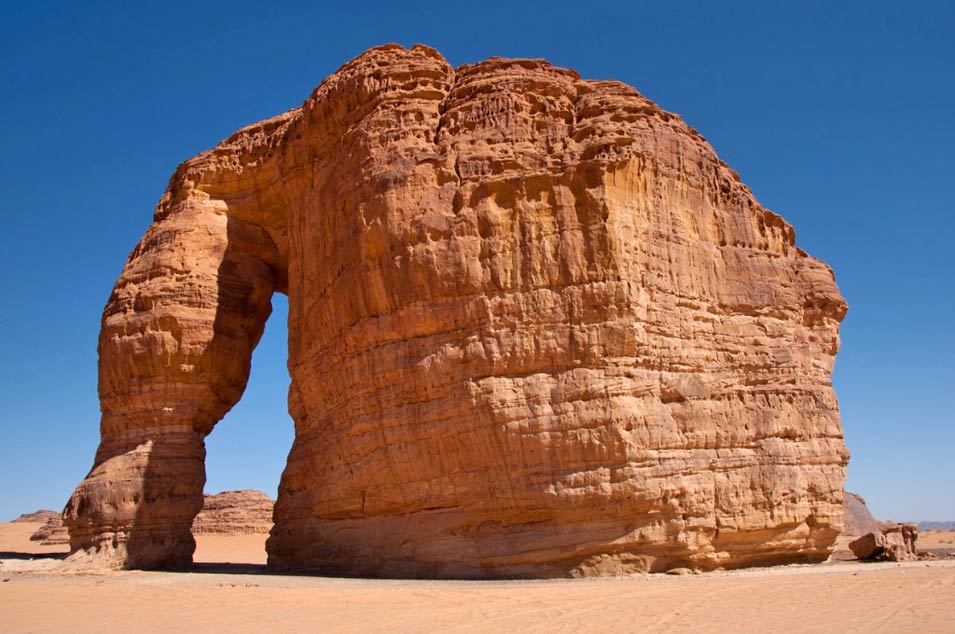 In AXP’s recently-concluded series, The Seven Wonders of Arabia, readers were taken on monthly visits to seven of the most outstanding historical sites in the Kingdom. The tour began in November of last year with a stop at the rock tombs of Madâin Sâlih, not far from al-Ula in the Al Madinah Region of the Kingdom. Madâin Sâlih is a stunning Nabataean city carved out of solid rock that has often been compared to Petra in Jordan. The similarities between these UNESCO World Heritage Sites are many, yet Madâin Sâlih is arguably the better preserved of the two—noticeably less worn down by the forces of nature and man than is its sister city to the north.

The Seven Wonders tour ended six-months later in May of this year with a visit to Ar Rajajil, a unique array of stone obelisks standing sentinel on the edge of the Nafud desert near Sakakah, Al-Jawf Province in the northwest corner of the Kingdom. The man-made rock formations at Ar Rajajil have often been compared to Stonehenge in England, Both remain mysteries, yet Ar Rajajil has been far less studied than Stonehenge and poses an even greater challenge to archaeologists bent on seeking answers compared to that famous ring of sarsen stones on England’s Salisbury Plain.

On the fifth stop this past March, readers were ushered through the incomparable mix of man-made and natural splendors known as Al Ahsa Oasis, another UNESCO World Heritage Site located in the Kingdom’s Eastern Province, 60 miles inland from the Arabian Gulf, What makes Al Ahsa unique in comparison with the other six members of the historic Wondrous Seven is that it is equally deserving of recognition as one of Arabia’s greatest natural wonders.

In putting together our list of seven natural wonders, we have chosen not to include Al Ahsa among them. We’ve made the same decision regarding the Rub’ al Khali—the famous, incomparable Empty Quarter—Arabia’s great sand desert. With those two exceptions noted, here is the itinerary for the grand tour AXP readers will be taking over the next seventh months as we introduce them—or, in many cases, surely, re-introduce them—to The Seven Natural Wonders of Arabia.

Carved from solid rock by winds over a span of millions of years, Elephant Rock is located near Al-Ula in western Saudi Arabia, not far from Madâin Sâlih. The natural formation looks exactly like the pachyderm it is named after, the elephant. It is surrounded by hundreds of other natural rock monoliths.

People unfamiliar with the geological history of the Arabian Peninsula do not often associate volcanoes with its desertscapes, but they are wrong in doing so. As proof, we plan to take readers on a visit to Jabal Abyad, also known as White Mountain, located in the rocky desert north of Madinah. Jabal Abyad is the Kingdom’s highest volcanic peak at 2,093 meters. Seeing firsthand it’s otherworldly beauty makes for an unforgettable travel experience.

The third stop on our tour of the Natural Wonders of Arabia will be the towering cliffs known as “The Edge of the World” found in the desert northwest of Riyadh. The view from the top of the escarpment is breathtaking.

The Farasan Islands, situated 30 miles off the coast of the Red Sea near the city of Jizan have been called “the Crown Jewels of Saudi Arabia’s travel treasures” and with good reasons. Their unique natural habitat, which includes mangroves, pristine beaches, coral reefs, rich and varied marine life, and much more is truly a wonder to behold.

At 3,015 meters, Jabal Sawdain the Asir region, 12 miles distant from the city of Abha, is the tallest mountain in Saudi Arabia. Cloaked in stands of Juniper trees, its slopes are home to a wide and colorful array flora and fauna.

One hundred fifty miles from Taif, on the western edge of the Harrat Kishb basalt plateau one finds a cluster of volcanic cones, The largest among them is Al Wahbah Crater, 800 feet deep and a mile-and-a-quarter in diameter. A thick layer of white sodium phosphate crystals carpets its floor.