With only 9% of the world’s economy being circular, this leaves a massive business and environmental opportunity to reuse or recycle 91% of the global economy’s resources.

Most of today’s global economy operates in a linear way, where raw materials — instead of being reused, refurbished, or recycled — end up discarded as waste.

Whereas in a circular economic system, resources continue to be circulated through different means; similar to how Saudi Arabia values recycling the Kingdom’s precious water resources.

According to the 2015 “Waste to Wealth” study by Accenture, the economic growth generated by adopting circular business models has the potential to unlock $4.5 trillion by 2030 — on an annual basis.

Aramco has commenced initiatives toward becoming a leading company in the circular economy.

For several years, the company had implemented the circular economy concept, however, not as a stand-alone and structured program.

“The circular economy is an incredible economic prospect for the global economy, and Saudi Aramco is seizing this business opportunity by proactively moving to this operating model,” said Al-Sa’adi.

“Moving to a circular economic approach delivers both long-term market competitiveness and sustainability.”

“More importantly, a circular economy is a nature-driven economic concept, which addresses climate and energy goals,” he noted.

No Time to Waste
By using an integrated approach to embrace circular business models, value can be captured at every stage of Aramco’s operations.

Recently, the Board of Engineers (BoE) launched an initiative to promote the circular economy across all the company’s operations.

“We have started an upskilling and certification program, which has trained and certified more than 550 people across the company in the circular economy,” said chief engineer Jamil J. Al-Bagawi, who is also chairman of the BoE.

“We want to be fast in capturing this opportunity to improve competitiveness, unleash innovation, and provide abundant profitable opportunities and substantially improve our environmental performance, not only for Aramco but also for the Kingdom,” added Al-Bagawi.

As part of institutionalizing the circular economy, Aramco introduced an operational excellence process to guide all departments on their journey to increase circularity.

Aramco is also injecting circular economy design requirements in its capital project deliverables, which are governed under the company’s capital management system.

Al-Bagawi said Aramco could make a significant contribution toward a global circular economy.

“Aramco has decades of industry experience, an attitude of enterprise, and excellent people who history shows quickly adapt to change and challenge,” said Al-Bagawi.

“Across the company, we found many examples where Saudi Aramco works to the operating principles of the circular economy; however, our efforts can be accelerated.

“We need everyone thinking and operating in a circular way,” he said.

Changing to a circular economy involves a committed change to operating culture, and seeding it starts as early as the planning and design phase.

Together with the Kingdom, Aramco is also promoting a circular carbon economy, which focuses on the reduction, reuse, recycling and removal of carbon dioxide (CO2) and other greenhouse gas (GHG) emissions.

See Examples of Our Circular Economy in Action 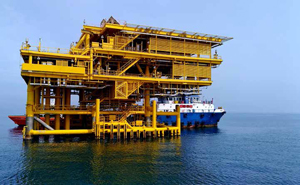 One design for offshore wellheads

Design sits at the heart of the circular economy.

When manufacturing materials and processes work from one design, their resources remain in use for the longest time.

Upstream Project Management said the standard design, known as the “SSS,” can be used again and again without replication of engineering.

“The ’SSS’ meant new wellheads no longer needed customized design,” they said. “Having one design that was understood and trusted by everyone built alignment across our stakeholders and reduced our footprint.”

Designed to accommodate 10 oil producing wells, the “SSS” can be powered by solar panels or a subsea cable, and has been used in the AbuSafah, Berri, Safaniyah, Manifa, Marjan, and Zuluf oil fields, while a gas customized design was adopted at the Karan, Hasbah, and Arabiyah fields.

Aramco adopted the design as a company standard, which was incorporated into Saudi Aramco‘s Engineering Standards. 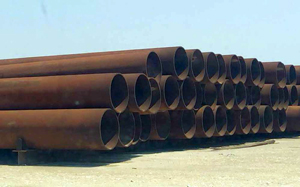 Rather than scrapping materials like unused line pipes, Aramco now maintains their economic value in the circular economy by offering a financial incentive to ensure purpose utilization as was originally intended.

In a fully turning circular economy, nothing is wasted.

In business, however, it can be less effort to buy new.

Aramco is incentivizing its business lines to make use of the company’s unused materials.

Instead of projects ordering new supplies, idle company materials are offered internally at substantial savings to encourage maximum resource use — and it’s a win for both business and the environment.

Salem A. Al-Huraish, then-acting general manager of Procurement, said instead of sending materials for sale as scrap, other business areas are incentivized to use the materials for the purpose they were manufactured.

“It can be easier to buy new, but there is a strong financial incentive now to look interally at what we already have,” said Al-Huraish.

In February 2020, Aramco availed surplus materials to other industrial users, which, to date, have been utilized by multiple projects, including the Khursaniyah and Hawiyah gas plants, Shaybah NGL recovery plant, and the South and North Ghawar projects.

Additionally, last year a three-year contract was signed with a local manufacturer to buy and recycle Aramco reclaimed hydrocarbon chemicals.

The manufacturer uses the reclaimed hydrocarbons for products like paint and asphalt, and collects the feedstock from reclamation yards as well as operating plants, minimizing hazardous chemical transportation.

Recycling these chemicals results in significant savings, and creates a new revenue stream. 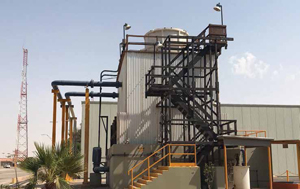 Whether a dewdrop or a torrent, water is essential for life’s sustenance.

Water in Saudi Arabia’s arid environment is a treasured resource, and Community Services executive director Faisal A. Hajji said saving water is a priority for the company’s residential communities.

Treated wastewater from residential communities is reused for irrigation and to cool centralized air-conditioning plants.

“By reusing the rejected water from the drinking water plants, and increasing the use of treated sewage water each year, we conserve approximately 4.8 billion gallons per year of precious groundwater,” said Hajji.

The filtration process for the drinking water at the upstream of reverse osmosis units was changed from sand to cartridge- type filters.

Using tertiary treated sewage effluent instead of non-replenished raw water in centralized air-conditioning plants’ cooling towers has proved to be a safe and reliable initiative.

Energy efficiency of the air-conditioning units was improved, with outcomes such as less scaling buildup of condenser tubes, resulting in less maintenance activity.

Resource reutilization increases the life cycle of assets in the company’s communities and office buildings around the Kingdom. 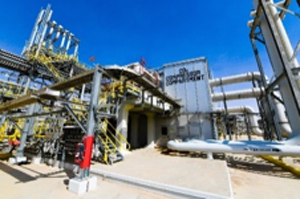 Rather than sending CO2 to a stack, an internally geared compressor at the Hawiyah NGL recovery plant uses seven stages to compress CO2 , where the fifth stage involves routing to a gas dehydration unit, before being returned for stages six and seven in the compressor.

Injecting carbon back into its home

Hawiyah NGL plant manager Ahmed Al-Harbi says the system stops CO2 becoming a GHG, and has reinjected 800,000 tons of CO2 each year since 2015.

At the Hawiyah NGL plant, CO2 received from the Haradh gas plant is separated from other gases, then dried by a dehydration unit designed to capture 45 MMscfd of wet CO2, and finally compressed to 3,000 psi to be piped to a reinjection site in ‘Uthmaniyah.

The high-pressure liquefied gas is transported through an 85-km pipeline to ‘Uthmaniyah GOSP-7 for reinjection and enhanced oil recovery.

The basis of the technology has been in the refining industry for decades — natural gas used for energy has its CO2 removed.