Christine Smith Paints Among the Fishermen in Porto Heli 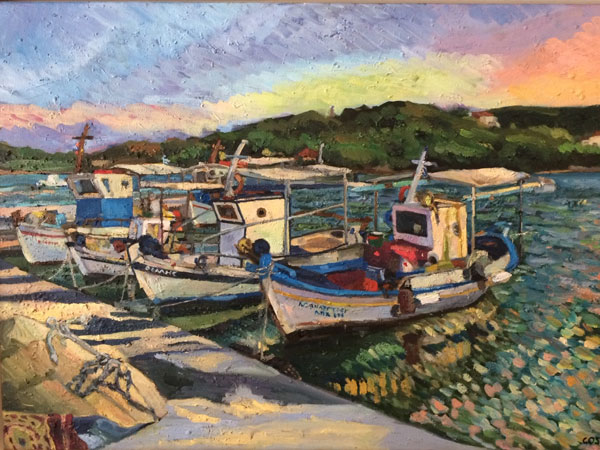 Beneath often vivid blue skies and surrounded by the crystal-clear waters of the Aegean lies Porto Heli, Greece, a small fishing village a short ferry ride from Athens. Known for its protective coves and bays, it is a frequent mooring place for fishing boats. It is no surprise that for an artist like Aramco brat Christine Smith, the port at Porto Heli has become a favorite backdrop for many of her paintings. Christine has spent hours over the years along the harbor painting her subject matter while acquainting herself with the local fishermen who have come to appreciate her presence among them. As you will see in the representative paintings she's chosen to share with Aramco ExPats, she captures the tranquility of port towns — its fishermen, harbors and docks — as only an artist can. 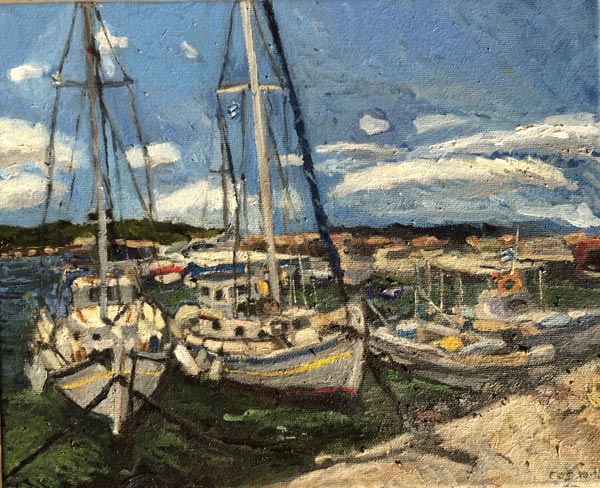 This is a painting done at the end of summer in Greece, where fishing boats and sailboats are at ease after summer. 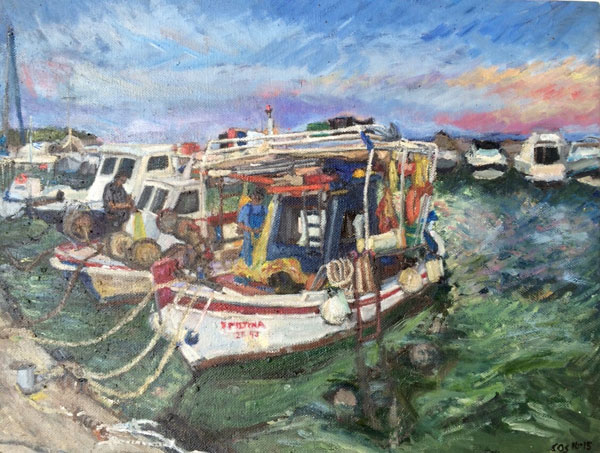 This painting shows a sunset over the little fishing boats on the marina in the southern suburb of Athens.

In a recent conversation with Christine, she shared what its been like for her to work among the fisherman of Porto Heli:

"In general, what’s great about working close to the fishermen is that they let you get on with it and mostly respect you as you work. I've been going out there for weeks, months and even years and see the same people every day. Eventually, you get familiar with them, their boats and their routines. It’s hard sometimes being a woman amongst the men, but you make it clear to them that you’re serious. At first, they joke, but then when we’ve gotten to know each other, watching them get involved in the piece, caring about the outcome and being proud makes the project all the more special. 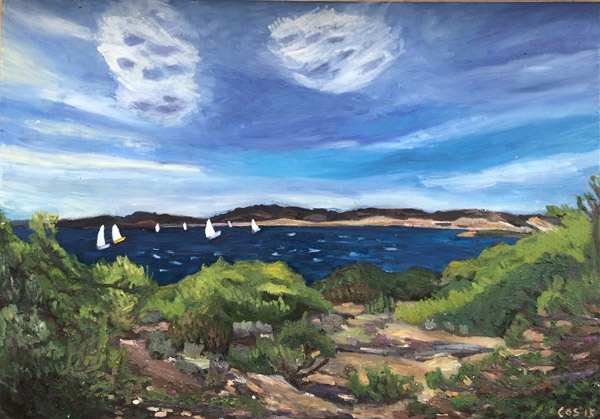 Here sailboats are in full sail on their way back from their Piraeus- Glyfada route.

This painting depicts a typical weekend view as sailboats on the Glyfada seafront of the Mediterranean Sea coast make their way back to the main port of Piraeus.

"It’s really an incredible feeling being able to connect in a creative way to just everybody - the whole town has gotten involved in some of the projects. For instance, a few years ago, we had an exhibit with some of the kids in our area where they made art posters centered around the sea and protecting the environment, and the municipality hosted our exhibit right on the main port in a landmark building and of course, everyone was invited. I put up posters at “our” spot where the fishermen have their rest break and they were really happy about being part of it." 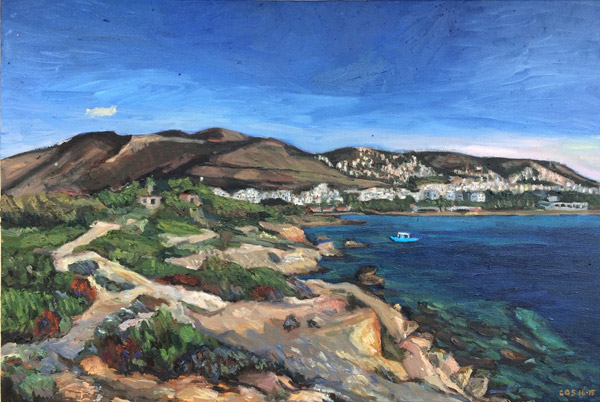 This view shows the pretty beach that belongs to an organization that helps children with special needs in our area, which is our community beach that is taken care of by volunteers, in the area of Voula. 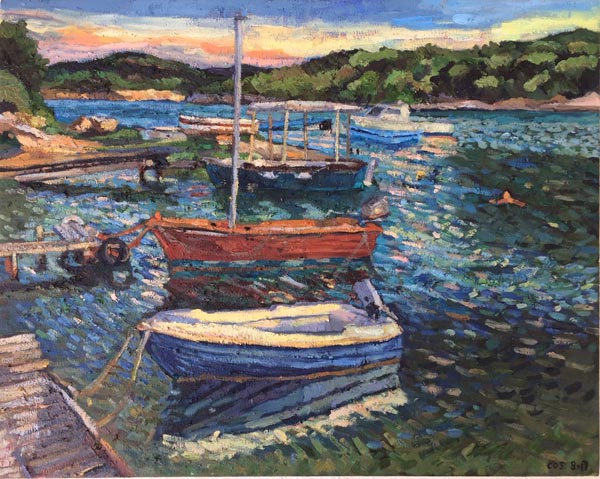 Christine is the daughter of Ron and Iro Smith whose adventure began in Dhahran in 1982 when Ron, a civil engineer, was first employed by Aramco. There they lived and worked for 27 years, raising their three children —Christine, Lorraine, and Andrew. In 2008, Christine opened Blue Fig Art in Porto Heli, an art gallery that has grown into a multi-functional art space used for exhibits and art workshops while serving as well as a studio. Visit Blue Fig Art. 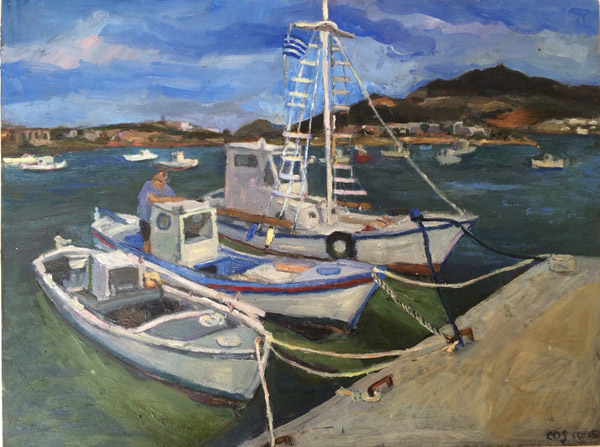 These little fishing boats rest on the quiet port of Antiparos Island in the southern Aegean Sea. 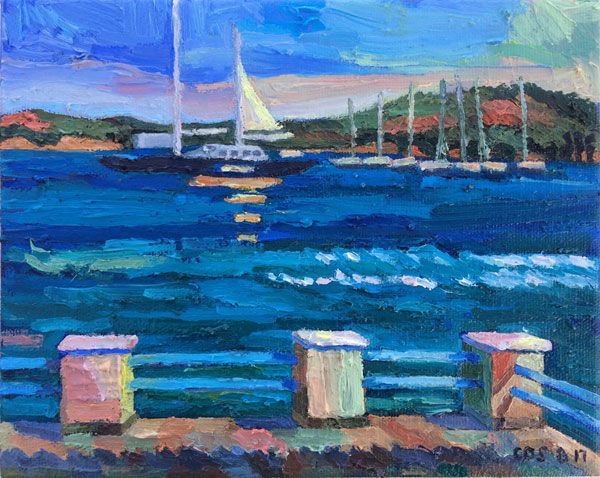 An impressive sailboat is lit by the late afternoon sun in August.

When we asked Christine how she and her family are doing, she replied, "mostly the rest of my family have been away the whole time, but my mom is swimming in one of the paintings! Each one is a total adventure and rugged living for a while so they usually get to enjoy seeing the beautiful picture of places they may or may not have noticed right in our area. They are doing really well, my parents are busy and visiting friends and family around Greece. My sister is in the States working hard and raising her little kids, and my brother is doing the same in Bahrain."

Christine also notes that the last painting in this series is from a Bahrain harbor. 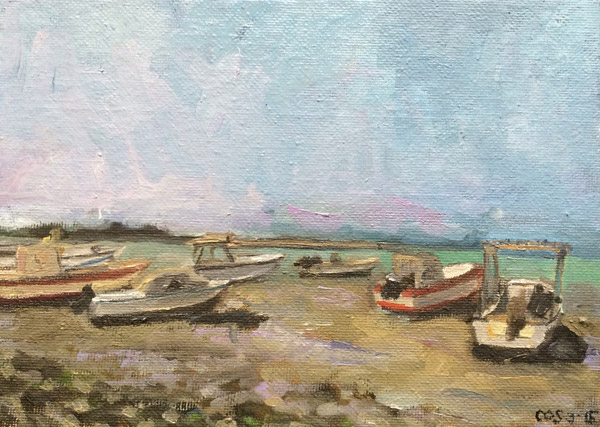