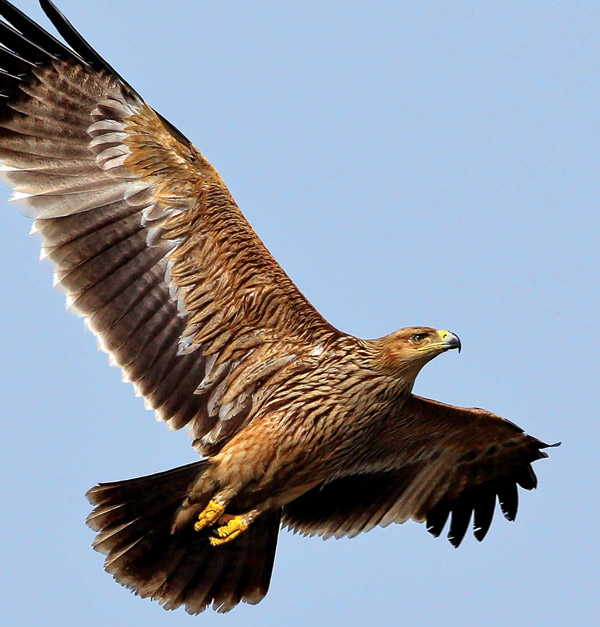 For a country that is mostly desert, Saudi Arabia has a surprisingly diverse population of wild animals and plants. A remarkable 499 species of bird have been recorded in the Kingdom, along with 117 mammal species, 107 reptile species, 1,230 fish species, 266 coral reef species, eight amphibian species, and more than 2,400 different types of flowering plants.

Saudi Arabia’s biodiversity includes some of the most beautiful animals on Earth, such as the resplendent Arabian Sunbird with its iridescent green, blue, red, purple, and black feathers that sparkle in the sunlight. It also includes some of the most fascinating animals on earth, such as the Arabian Babbler, a group-living bird that shows social behaviors as complex as a community of chimpanzees or the most intricate Shakespearean drama.

Unfortunately, Saudi Arabia also contains some of the most endangered animals on earth, such as the Sarso Island Racer, a type of snake that was discovered on the Farasan Islands, off Jazan, in 1964. This snake had never been seen before — and has never been seen since.

Saturday, May 22, is the United Nations’ International Day for Biological Diversity, which is designed to increase understanding and awareness of biodiversity issues. This year’s theme is, “We’re part of the solution.”

Approximately 33% of the Kingdom’s plant and animal species are formally listed as threatened with extinction, with as much as 70% of the plant and animal populations decreasing. Alarming statistics such as this can be discouraging. If so many species are falling in numbers, which ones should we try to help first? Globally, people have tended to focus on saving large, charismatic species, pretty species, or cute and cuddly species. But there is not a lot of scientific rationale behind those decisions. 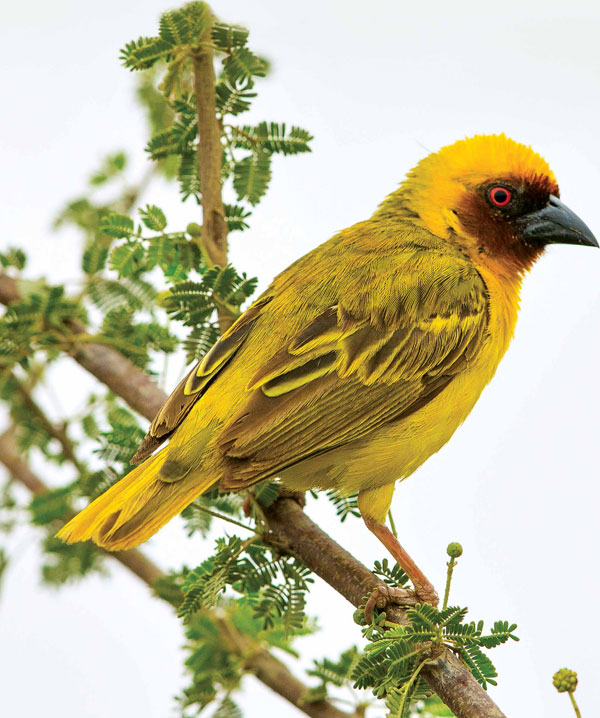 Often found in cities and towns, the Rueppell’s weaver is common in the western region.

Recently, Aramco developed a scientific method for ranking the conservation priority of every animal species that lives in Saudi Arabia (not including marine species). The Environmental Protection organization scored each species out of a maximum of 100 points according to several factors, such as:

This has allowed the organization to create a score sheet that ranks every species from the highest conservation priority to the lowest. There is no judgment or personal opinion in the scoring system; it is purely empirical. 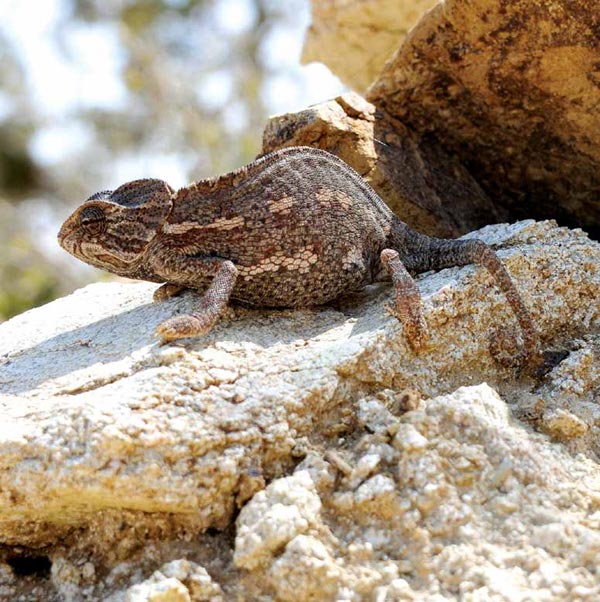 The veiled chameleon occurs only in Saudi Arabia and Yemen.

By using this scientific scoring system, the highest conservation priority species in Saudi Arabia right now is a freshwater fish species called the Arabian Bream. This little fish was first discovered in 1983, but was not seen again until it was rediscovered in 2014 at Khaybar, north of Medina. It is critically endangered and only known to live in one small dam in the Kingdom.

The next highest conservation priority animal is the Asir Magpie. Perhaps only 100 pairs remain of this highly endangered bird, all of which are confined to a few tiny patches of juniper forest in the Asir Mountains in southwestern Saudi Arabia.

Most of the top 20 highest conservation priority species are small freshwater fish, reptiles, or birds that few people have even heard of. They are not beautiful. They are not iconic. But just because an animal is not famous does not mean people should care any less about it. Indeed, the fact that these animals are so poorly known is another reason why people need to tread very carefully. 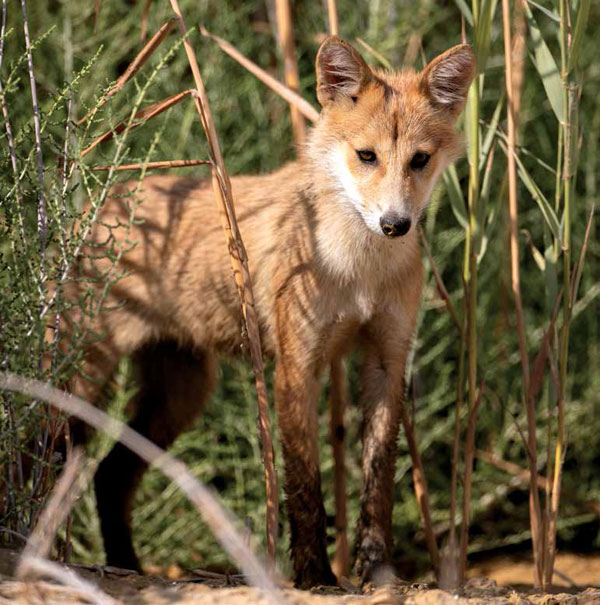 The Arabian golden jackal is one of 117 mammal species recorded in Saudi Arabia.

We’re part of the solution

Aramco has recently developed a corporate biodiversity protection policy that requires all new projects to have a net positive impact on biodiversity.

The company seeks to protect biodiversity by reserving high quality habitat. To date, Aramco has designated 10 biodiversity protection areas on company land covering 977 km2 and is helping to protect more than 500 species of plants and animals.

Aramco is also trying to reduce negative environmental impacts wherever possible. Accordingly, EPD conducts thorough biodiversity surveys before the company commences any site preparation. Not doing so could accidentally cause globally significant damage to some of Saudi Arabia’s most important species.

Aramco also helps to restore degraded habitats. For example, the company has planted millions of mangrove trees at key sites along the coasts to restore these critically important habitats. Likewise, the company has reintroduced Arabian oryx, Arabian gazelle, and rednecked ostrich into the vast Shaybah Wildlife Sanctuary in the Rub’ al-Khali desert. 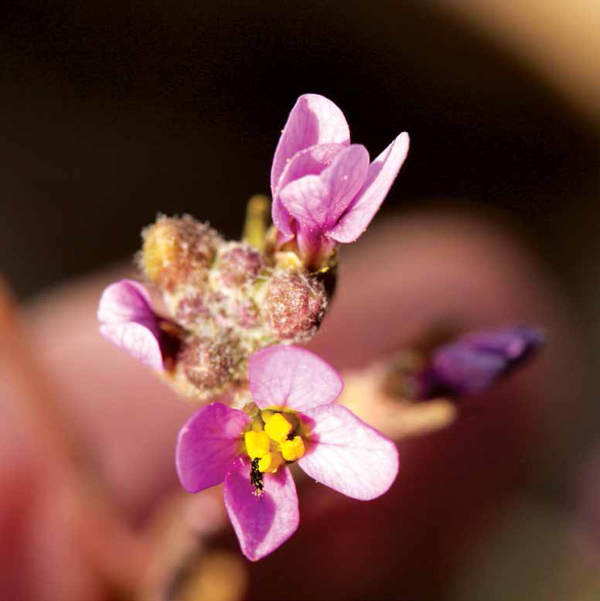 Cakile arabica: The sweet-smelling zumlug flower can form a sea of pink after rain.

How can you help?

The world is currently confronted by a global biodiversity crisis. It is a daunting task. So how can you help? The best thing you can do is protect precious native plants. Do not drive over desert vegetation, and do not collect too much wood. In Saudi Arabia, a small plant only 50 centimeters high may be 40 to 60 years old. If it is killed, it will take decades to be replaced.

You can also plant native trees. You can stop littering. You can stop hunting wild animals. All of these actions help to reduce the human footprint, which allows more room on Earth for nature to exist.

You can be part of the solution to the biodiversity crisis. If you do not help protect our biological diversity, then who will?