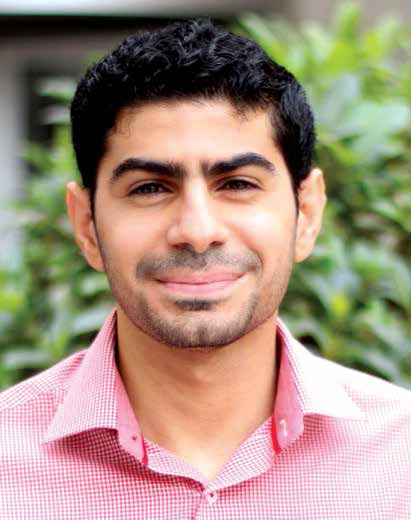 "The model developed for the project improves the accuracy of rock failure prediction by 95%, providing a faster, more accurate predictor of rock failure that will help minimize nonproductive time events and reduce operations costs."

Hussain Albahrani can see the miraculous in the mundane. That talent won him the Society of Professional Engineers’ (SPE) Gulf Coast North America Regional Award-Ph.D. Division for a project that provides a model for predicting rock failure while drilling is ongoing.

The mathematics and mechanics Albahrani delved into for his project may seem dry subjects to some, but for Albahrani they were an endless source of fascination.

“While my background is in petroleum engineering, I always had an interest and curiosity about mechanics,” Albahrani said. “This is combined with the fact that I get an immense amount of joy implementing mathematical formulations and automating repetitive tasks into a code means that geomechanics modeling is the perfect area of research for me.”

Albahrani said the model developed for his project improves the accuracy of rock failure prediction by 95%, and this claim is backed up by verifiable and reproducible lab and modeling data. He said that providing a faster, more accurate predictor of rock failure will help minimize nonproductive time events and reduce operations costs.

Albahrani spent about two years on the project, and plans to publish his results. He is also now hard at work pursing other avenues within the oil and gas industry to apply the model he created. Albahraini said he wished to dedicate his project to his parents, who taught him the value of hard work, and thanked his management and his adviser, professor Nobuo Morita.

Showing the World what Aramco can Provide the World

Albahrani said he saw the competition as an opportunity to challenge himself and show the world the quality research that Aramco and Saudi Arabia can provide the world.

“I’m very grateful for this win because it provides me with the courage to keep pursuing new creative ideas no matter how unconventional they may seem,” he said.

“His research addresses an important challenge for the industry and is very well aligned with the drilling automation digital transformation concept,” Al-Tahini said.

Albahrani hopes that his achievement will inspire other students to challenge themselves and pursue the ideas they’re passionate about.

“Don’t pay attention to the fear in yourself — the fear of learning new things and not being good at them in the beginning,” he said. “The fear of pursuing outof- the-box ideas that may seem strange to others. And definitely the fear of failing.

“If you try something new and you fail, that is progress; you now have one less thing to worry about, and you can move on to trying new things until you find your next passion,” Albahrani added.