Aramco Retiree Golf Group Teed It Up At The Woodlands

The Saudi Aramco Retiree Golf Group held its first event this year at The Woodlands Resort in The Woodlands, Texas October 19-23, 2020. The event was originally scheduled for April 19-23, 2020, but the virus squashed those plans and was moved to October with the group adhering to CDC guidelines to allow holding the event. The event was hosted and organized by local residents Mel and Marti Knotts and Brian Hoegsberg and by the golf group's organizer Mike Haas. A full week of fun-filled activities included 3 rounds of golf at The Woodlands Trails Panther and Oak courses and at The Woodlands Country Club Tournament course that hosted the Shell Open PGA tournament for many years. The evenings included an “Ice Breaker” at The Woodlands resort, fine dining at Tressie’s Southern Kitchen that is owned and operated by Mel and Marti Knott’s and dinner at The Woodlands CC Tournament course at the conclusion of the Wednesday golf round. Daytime activities for the non-golfers included reuniting with old friends, shopping excursions and various local activities.

There were 40 golfers that included (from L to R): 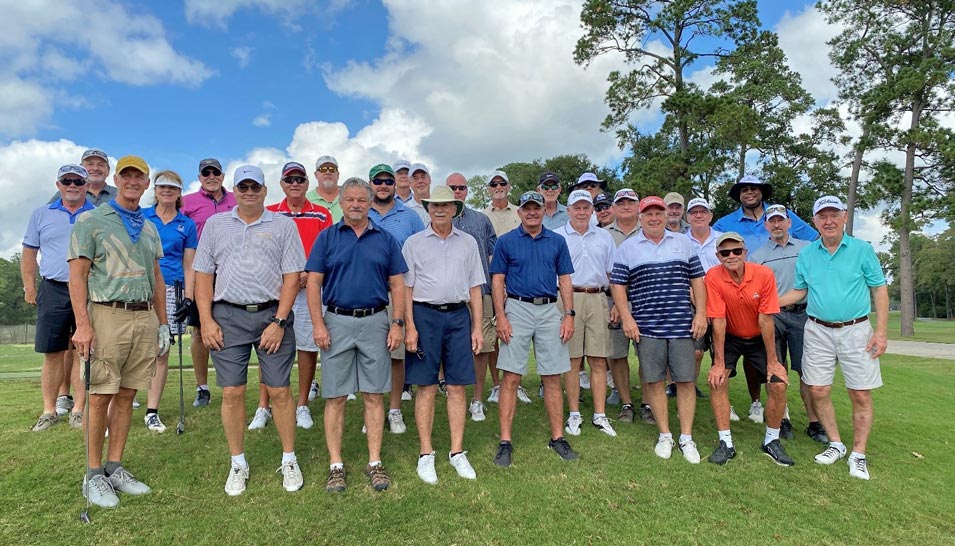 Dinner at Tressie’s Southern Kitchen in Magnolia, Texas owned by Mel and Marti Knotts was a special event with the restaurant reserved for our group and a special menu to enjoy the finest Southern cuisine that Texas has to offer. Matt Knotts (Mel and Marti's son) is the chef and there were so many comments about how good the food tasted so if you are in that area, be sure and stop in for a meal.

The following photo includes golfers, spouses/partners and guests (from L to R): 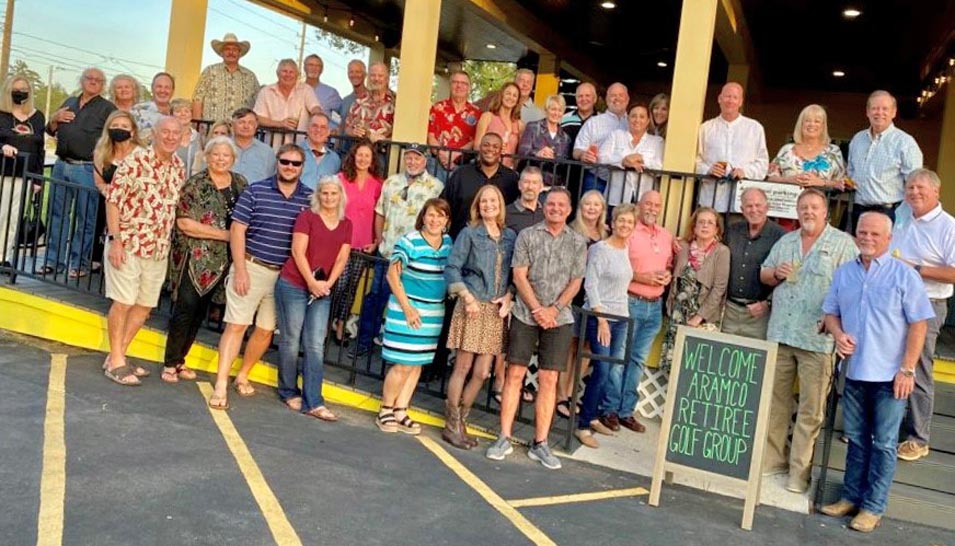 The following photo shows the early golf groups as they prepare to load their golf carts and tee off at The Trails Oaks course on Thursday. 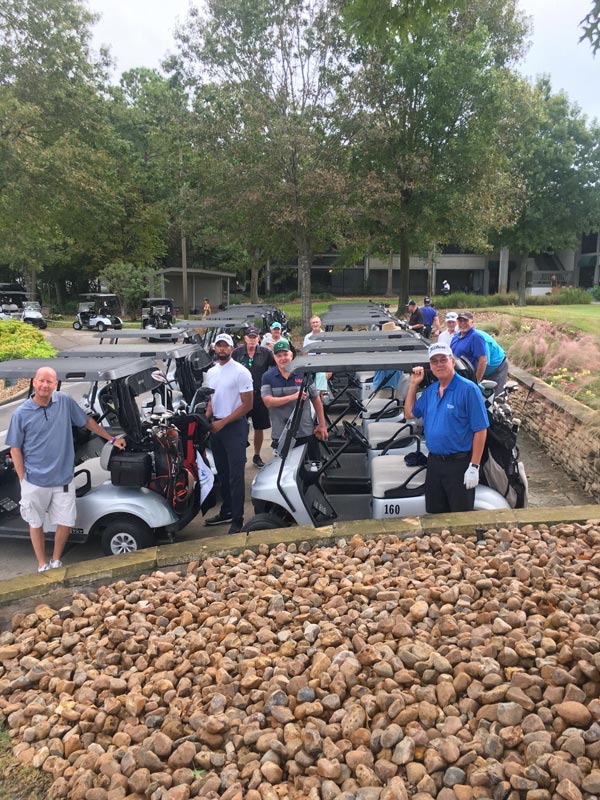 Below (from L to R), Don Nims, Darryl Shields, Jim Aceto and Robin MacDonald celebrate winning the team event on Thursday at The Woodlands Trails Oak course with 86 Stableford points counting the best two-ball score per hole for the 18-holes. 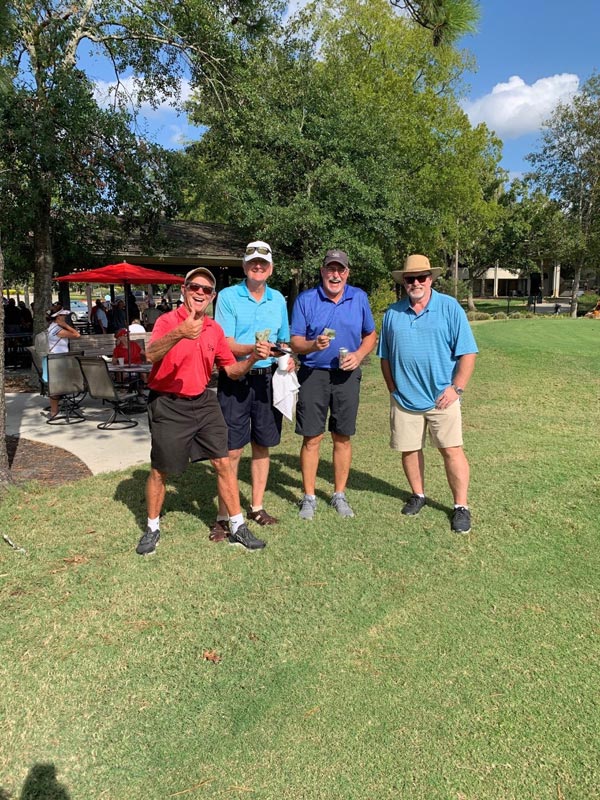 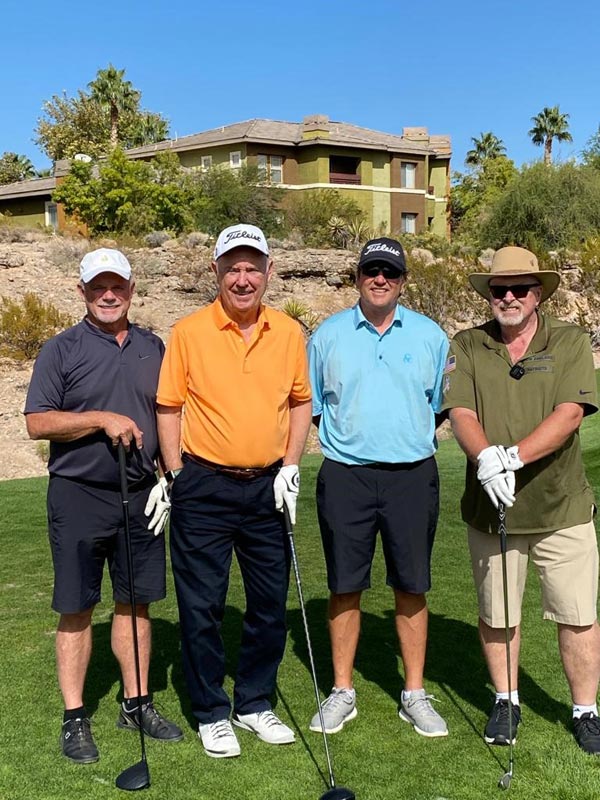 This Saudi Aramco Retiree Golf event was a great opportunity to spend time with our retiree friends that traveled long distances to play golf and visit. The next event is scheduled during April 2021 in Dallas, Texas with details by year-end. If you are interested in attending, please contact Mike Haas at mdhaas@attglobal.net or mdhaas51@yahoo.com.