Spreading a Culture of Giving Back Globally

On your marks, get set, go! Runners bolt from the starting line at the Aramco Houston Half-Marathon held this past weekend.

Houston — In Houston and in elite running circles around the world, the name Aramco takes on special meaning each year in January. That is when more than 300,000 runners, spectators, and volunteers descend on downtown Houston to be part of Marathon Weekend.

The three-day event hosts the Aramco Houston Half-Marathon, the Chevron Houston Marathon, and the We Are Houston 5-K, which is jointly sponsored by Aramco and Chevron.

“Our longstanding support for this event is part of a larger Aramco commitment to health and wellness in the communities where we live and work,” said Mohammad S. Alshammari, president and CEO of Aramco Americas.

This year, the Aramco half was especially relevant as it was the last race that runners could use to qualify for the U.S. Olympic Trials — a dream for many American runners. As a result, this year’s field of top athletes was larger than ever before.

Taking the win in the women’s half-marathon was Hitomi Niiya of Japan, with a time of 1:06:38, while Jemal Yimer of Ethiopia captured the men’s race with a time of 59:24 — just two seconds shy of a course record. 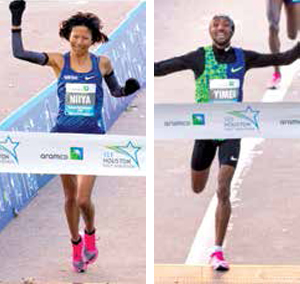 Winners of the 2020 Aramco Houston Half Marathon, Hitomi Niiya of Japan in the women’s race, and Jemal Yimer of Ethiopia in the men’s contest, cross the finish line.

The event kicks off the year for Aramco Americas’ social responsibility and citizenship program in the Houston community and throughout the U.S., with more than 220 employees, friends, and family members turning out to volunteer, handing out race bibs and T-shirts, meeting attendees at the Aramco exhibit, waving from the starting lines, and greeting runners at the finish.

The race is seen as an opportunity to show the company’s continued commitment to the city it has called home for decades.

Runners participated in the “Run for a Reason” program to raise money for good causes, and Aramco joined in by making a donation to the Alzheimer’s Association, which was selected by employees.