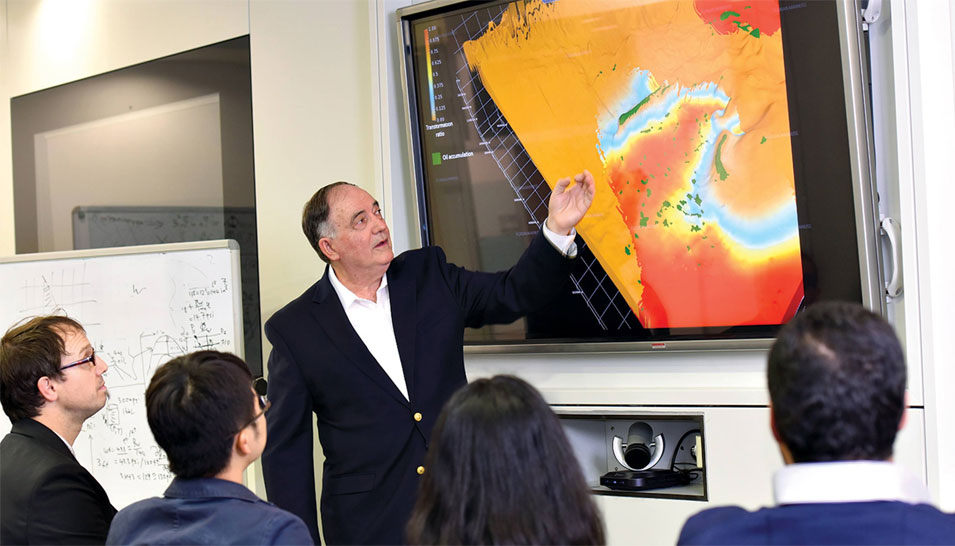 Ali Dogru works on a TeraPOWERS simulation with his team in Dhahran. The Saudi Aramco fellow has again been recognized by the Massachusetts Institute of Technology, this time by its Earth Resources Laboratory (ERL) and the Department of Earth, Atmospheric and Planetary Sciences. Dogru is among the first class of ERL Fellows, which also includes professionals from Shell and the National University of Singapore.

Saudi Aramco fellow Ali Dogru has been recognized by the Massachusetts Institute of Technology’s (MIT) Earth Resources Laboratory (ERL) and the Department of Earth, Atmospheric and Planetary Sciences (EAPS) with a new Fellowship honoring leading researchers in geophysics, and related areas.

Dogru is among the first class of ERL Fellows, which also includes Dirk Smit, the vice president of Exploration Technology and chief scientist of geophysics at Shell, and Arthur Cheng, a professor of petroleum geosciences at the National University of Singapore. The three Fellows will be invited, and encouraged, to spend time on campus, pursuing work of their choice in collaboration with ERL students, researchers, and faculty.

New Perspectives from The Field

Laurent Demanet, associate professor of applied mathematics and director of ERL, — and Robert van der Hilst — Schlumberger professor of earth and planetary sciences, and EAPS department head — said these visits will be opportunities for the Fellows to contribute to ERL’s research mission and offer mentoring and career guidance to students.

“MIT is known for innovative interdisciplinary work that often begins with informal interactions among researchers,” says Demanet. “By including leaders from academia and industry in the day-to-day life of our lab, we hope to not only recognize their support but gain valuable perspectives on the past, present, and future of our fields.”
The selection of the first class of ERL Fellows was done by a prestigious committee, including oil industry executives and EAPS professor emeritus and ERL founding director M. Nafi Toksöz. The names of the first class were announced at the 2018 Society for Exploration Geophysics Annual Meeting in Anaheim in late 2018.

A Career Steeped in Excellence

Dogru has published extensively throughout his career and holds many U.S. patents. He has received SPE’s John Franklin Carll, Reservoir Description and Dynamics, Honorary and Distinguished Membership Awards, along with World Oil’s Innovative Thinker Award and ADIPEC’s Best Technology Award. He is also a member of the U.S. National Academy of Engineering.

Dogru started his career at Saudi Aramco in 1988, initially on a loan basis from Mobil, and in 1996 he transferred permanently to Saudi Aramco. A visiting scientist at MIT since 2011 and a Saudi Aramco Fellow since 2013, Dogru is the director of Saudi Aramco’s Computational Modeling Technology team, which is creating the world leading TeraPOWERS program for modeling Saudi Arabia’s reservoirs with granular accuracy. His current research is focused on developing the next-generation parallel reservoir simulator to improve the reservoir models and optimize oil recovery in mature fields, helping Exploration find new oil and gas fields.

“This is a great honor for me to be recognized by MIT and to be among the three most distinguished scientists from around the world,” said Dogru. “This event also reflects Saudi Aramco’s capabilities in leading edge technologies. I believe my eight years of association with MIT in research and teaching has contributed to this recognition, and I would like to thank the leadership of Saudi Aramco, and all of my team members and colleagues from the industry and academia for their support.”