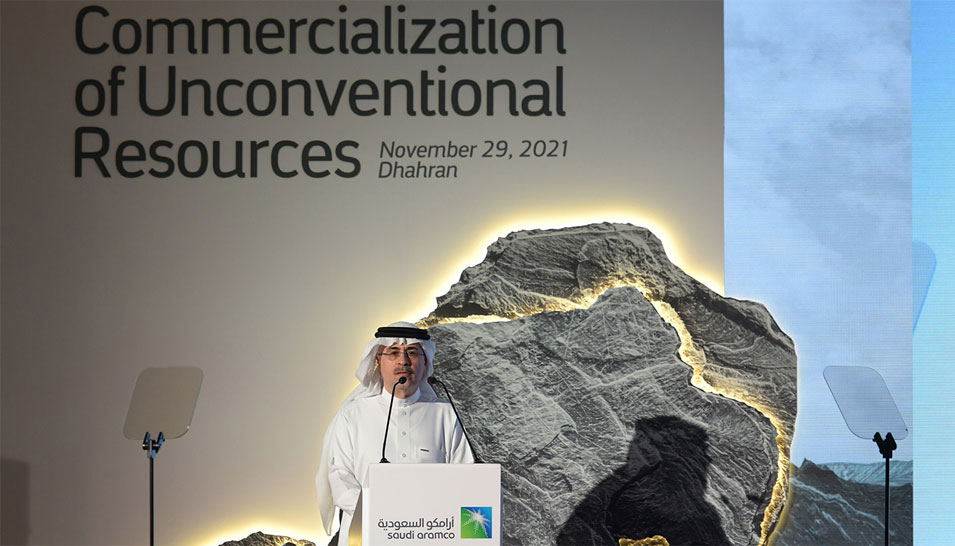 The Saudi Arabian Oil Company (“Aramco” or “the Company”) today announced the start of development of the vast Jafurah unconventional gas field, the largest non-associated gas field in the Kingdom of Saudi Arabia. The Company has awarded subsurface and Engineering, Procurement and Construction (EPC) contracts worth $10 billion, with capital expenditure at Jafurah expected to reach $68 billion over the first 10 years of development.

It is a significant milestone both for the commercialization of unconventional resources in Saudi Arabia and the expansion of Aramco’s integrated gas portfolio, which will provide additional feedstock to support growth of the Company’s high-value chemicals business, complement its focus on low-carbon hydrogen production and help reduce emissions in the domestic power sector by providing a cleaner-burning alternative to liquid fuel.

With an estimated 200 trillion standard cubic feet of gas in place, the Jafurah basin hosts the largest liquid-rich shale gas play in the Middle East. This shale play covers an area measuring 17,000 square kilometers and production of natural gas at Jafurah is expected to ramp up from 200 million standard cubic feet per day (scfd) in 2025 to reach a sustainable gas rate of two billion scfd of sales gas by 2030, with 418 million scfd of ethane and around 630,000 barrels per day of gas liquids and condensates, which are essential feedstock for the growing petrochemical industry. It will make Saudi Arabia one of the world’s largest natural gas producers.

HRH Prince Abdulaziz bin Salman Al Saud, Minister of Energy for the Kingdom of Saudi Arabia, said: “I would like to thank the Custodian of the Two Holy Mosques, King Salman bin Abdulaziz Al Saud, and HRH Prince Mohammed bin Salman bin Abdulaziz Al Saud, Crown Prince, Deputy Prime Minister and Minister of Defense, for their ongoing support of the Kingdom’s energy sector. The development of Jafurah will positively contribute to the Kingdom’s energy mix and it has been made possible thanks to close co-operation between more than 17 different agencies. The government is committed to the empowerment of national companies such as Aramco and no other energy company in the world is empowered to the same extent by the state, or by the Ministry of Energy which oversees the concession to develop the Kingdom’s hydrocarbon resources.”

The project is a key component of the Company’s long-term strategy and Aramco expects total overall lifecycle investment at Jafurah to exceed $100 billion. Through its unconventional gas program at the Jafurah, North Arabia and South Ghawar fields, the Company expects to create more than 200,000 direct and indirect jobs.

Amin H. Nasser, Aramco President and CEO, said: “This is a pivotal moment in the commercialization of Saudi Arabia’s vast unconventional resources program. It is a breakthrough that few outside the Kingdom thought was possible, and which has positive implications for energy security, economic development and climate protection. Gas has a critical role to play in the energy transition and it will help significantly reduce emissions in the domestic energy sector, while providing a feedstock for low-carbon hydrogen and ammonia. It will also allow Aramco to tap into high-value feedstocks for use in the expanding Downstream petrochemicals industry and our aim is to significantly increase our gas production capacity over the next decade to meet demand growth.”

Aramco recently announced its ambition to achieve net-zero Scope 1 and Scope 2 greenhouse gas emissions across its wholly-owned operated assets by 2050. Jafurah is expected to contribute to Saudi Arabia’s goal of producing half of its electricity from gas and half from renewables as the Kingdom pursues its own 2060 net-zero target.

Nasir K. Al-Naimi, Aramco’s Upstream Senior Vice President, said: “The development of Jafurah is a game-changer for our Unconventional Resources program. It will be one of the most modern, cost-efficient shale development schemes in the industry and observe the highest environmental and safety standards. Jafurah will be a key enabler of our ambitions moving forward, and we continue to explore new fields, re-evaluate existing ones and evaluate potential joint investment opportunities in both natural gas and natural gas liquids as we pursue our goal of developing an integrated global gas portfolio to meet long-term energy and petrochemicals demand.”

Aramco has awarded 16 subsurface and EPC contracts valued at $10bn for the Jafurah Gas Plant and gas compression facilities, as well as infrastructure and related surface facilities. These contracts were awarded to domestic and international service companies and involve several projects to enable development of subsurface and surface components of the Jafurah program.

This will allow for the reliable delivery of gas and condensates through a dedicated surface network that includes a gas processing plant, a gas compression system and network of around 1,500 kilometers of main transfer pipelines, flow lines and gas gathering pipelines. The program also includes construction of the Jafurah Bulk Supply Point, transmission lines, power interconnection for Jafurah Gas Plant and new cogeneration plant facilities.

Aramco has awarded the majority of Jafurah subsurface contracts, in addition to engineering, material procurement and construction contracts, to contractors based in Saudi Arabia, in association with reputed international contractors and service providers. This is in line with the Company’s efforts to support development of the domestic energy sector and local supply chain partners. In addition, to drive domestic value creation and maximize long-term economic growth and diversification, the Jafurah development program will include an In-Kingdom Total Value Add (iktva) component. Aramco launched the iktva program in 2015 to facilitate development of a diverse, sustainable, and a globally competitive energy sector.