When my grandparents Mary Garvin and William A. (Bill) Eddy were living in Jidda, Saudi Arabia (1943-1947), they acquired several wooden chests decorated with brass sheeting and studs. Produced in India for hundreds of years, these containers were popular with Arab traders around the Indian Ocean and as far east as China. Sailors on the trading dhows (sailing vessels) might have a simple chest for personal items while officers had more elaborate versions. Travelers used them as shipping trunks. In sparsely furnished Arab homes, decorative examples containing the family’s valued items -- or the woman’s dowry -- had pride-of-place in the sitting room.

As trade patterns changed in the early 20th century with steam powered vessels, the new Suez Canal, and oil development in the Gulf, dhow transport plummeted and production and use of these chests declined drastically. By mid-century, Europeans and Americans working in East Africa, the Arabian Peninsula, and India began to acquire them as vestiges of an ancient tradition, while museums featured examples in their collections of historic material culture. Although made in India—as Arabia had limited wood—they were known as Arab chests due to their association with Arab traders and merchants. The chests were commonly identified by owners according to where they had been acquired. I remember Mary Eddy referring to them as “Yemini chests” as they were likely shipped to Jidda from Yemen, bordering the Indian Ocean.

Given the enormous territory of the traders, chest styles and characteristics were inevitably borrowed from the many cultures encountered. We are indebted to an intrepid resident of East Africa, Sheila Unwin, for writing the definitive work on these folk containers. This historic information as well as a classification of types is all derived from her studies (The Arab Chest, Al-Turah, Riyadh, 2006). Identification of chest types involves attributes of hasp, hinge, brass sheeting, stud pattern, base configuration, and overall design.

Mary and Bill Eddy purchased at least five chests: one for themselves and one each for their four children: Bill Jr., Mary (Cita), John (Jack), and Carmen. Bill’s brother Herbert and his wife Clair also had a chest which was passed on to Cita and was likely also purchased by Mary and Bill. The trunks now belong to granddaughters Martha Keating, Carol Eddy, Sara Eddy, and me (Julia Costello), and to great granddaughter Caitlin Furman. Only Carmen’s chest has left the family.

Four of the Arab chests belong to the general category “Shuraz, Surat and Bombay”: they are all of teak and decorated with brass studs and pierced, light-weight brass sheeting. These chests all have a small lidded box (a “till”) fixed inside along one of the short ends. Circular motifs flank the central brass hasp and backplate. I attempted to distinguish “types” within this category and hope I am somewhat accurate. Caitlin’s chest – a Malibar - is the only type that is carved so is easy to identify. All types are constructed of nailed lumber and the lids feature rounded, overlapping moldings devised to keep the chest dry. The hinges holding the lids are distinctive and vary between the types. To protect the chests from damp and insects, it was customary to place them on four free-standing feet, some 5-9 inches high (see Julia’s chest).

Martha’s Bombay (Type 1). Made of teak with brass sheeting and decorative studs. 20 x 20 x 44 inches (51 x 51 x 110 cm). The original metal handles on drawers have been replaced with wooden knobs. Passed to her by our mother, Cita, in the 1980s, it likely once belonged to Bill Eddy’s brother Herbert and his wife Claire. 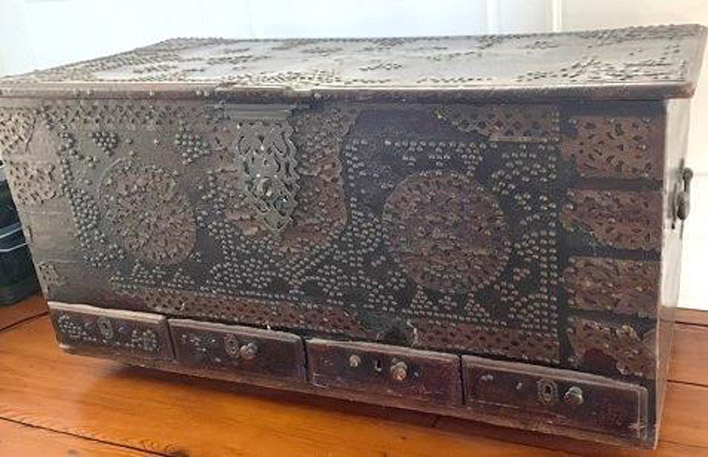 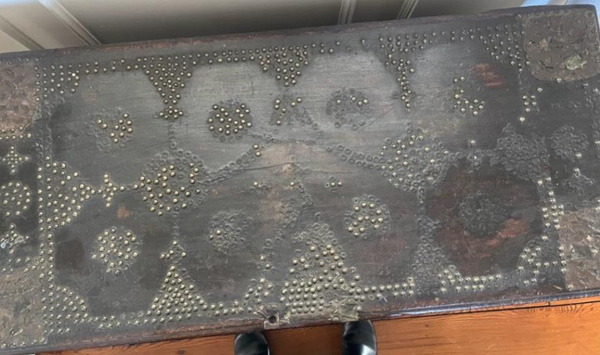 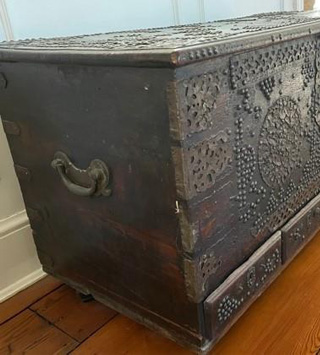 End hinges on “phoenix” back plates.

Julia’s Bombay (Type 2). Made of teak with brass sheeting and decorative studs. 18 x 18 x 44 inches (46 x 46 x 112 cm). The four painted feet are original, from Gujarat area of India. In the early 1980s, Mary Eddy was downsizing prior to her move to Meadowlake retirement home in New Jersey. Her daughter, my mother Cita, sent Mary's Arab chest to me. Shipping from Maryland to California, I expected a carefully-crated package. However, Cita, ever practical, simply put a cheap lock on the hasp and shipped it by bus. Notified to pick it up at the run-down Greyhound station in Stockton, I found my lovely antique treasure sitting among battered boxes and suitcases like a diamond in the coal bin. 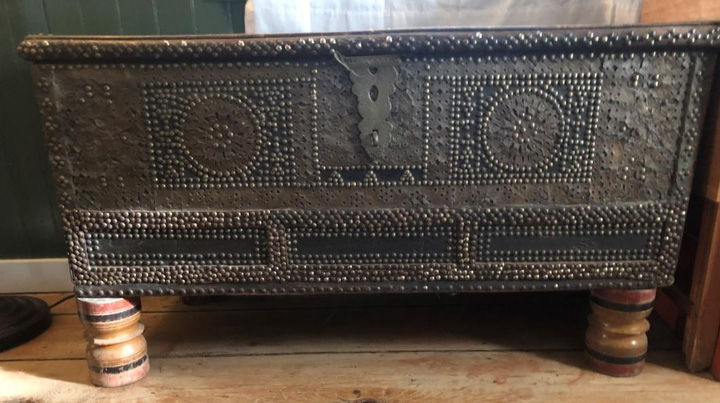 The front is covered entirely with light-weight sheeting pierced with decorative patterns. A suggestion of three lower drawers is simulated. Wooden feet are original.

Bombay type hinges inside the lid. 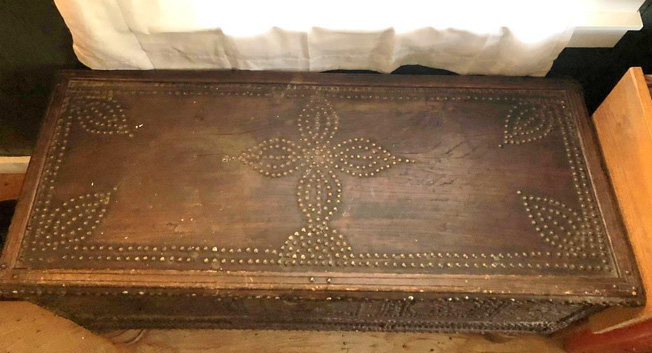 There are no square corner mounts, which are standard on Bombay types. However the single front hasp loop and hinge are distinctive of Bombay. 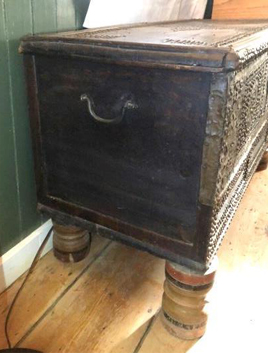 C-shaped handle with no back plate.

Carol’s Surat (Type 2). Made of teak with brass sheeting and decorative studs; Height 20 inches; width 30 inches; length 47 inches (51 x 76 x 119 cm). Three front drawers; the “bag shaped” handle on the right is likely the original. This chest belonged to Carol’s parents, Bill and Ann Eddy, and was passed on to her. 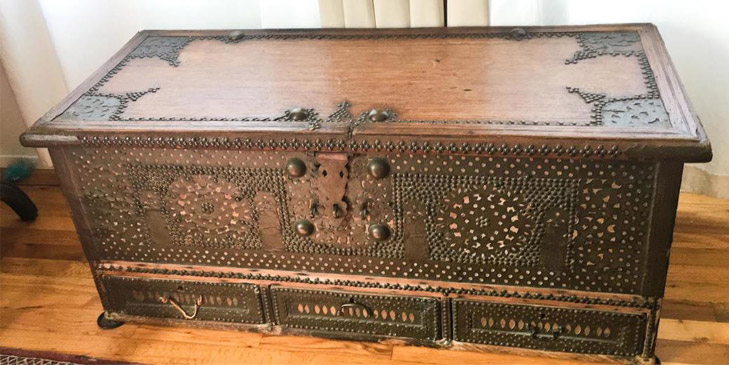 Distinctive knobs on the front and top secure the lock; the hasp covers only the center of the three loops. Lid is typically not decorated in the center. 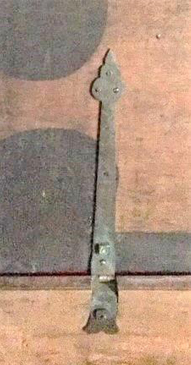 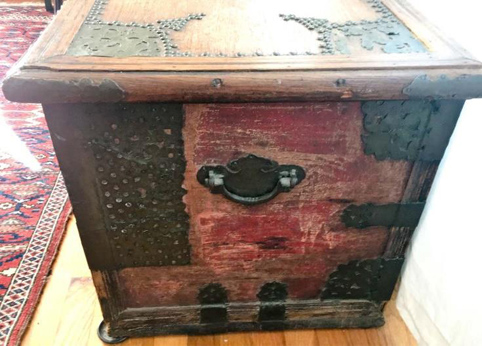 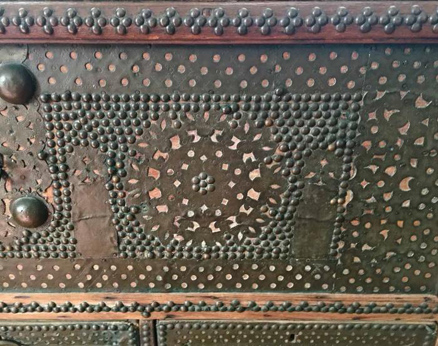 Sara’s Bombay (Type 2). Made of teak with brass sheeting and decorative studs, the chest measures 18 x 18 x 41 inches (46 x 46 x 104 cm). It has the distinctive single ring attachment for the hasp, corner mounts on the lid, and hinge that are all typical attributes of the Bombay Type 2. This chest resided in Jack and Jane Eddy’s, library and living room until it moved to their daughter Sara’s home. 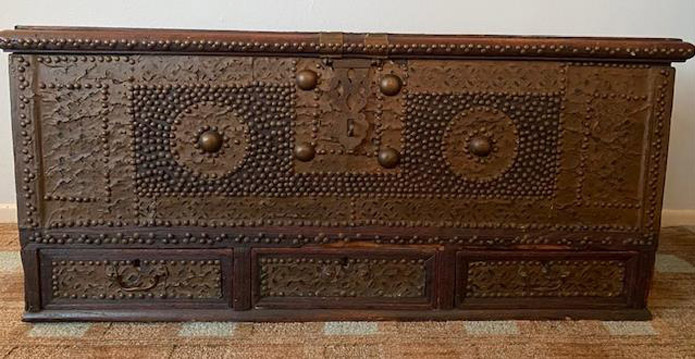 The front has a single loop for the elaborate hasp, an attachment typical of Bombay types. The three drawers are functional! 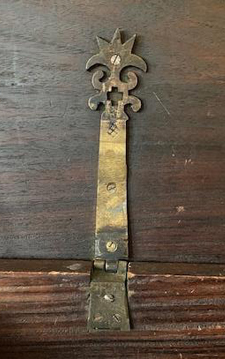 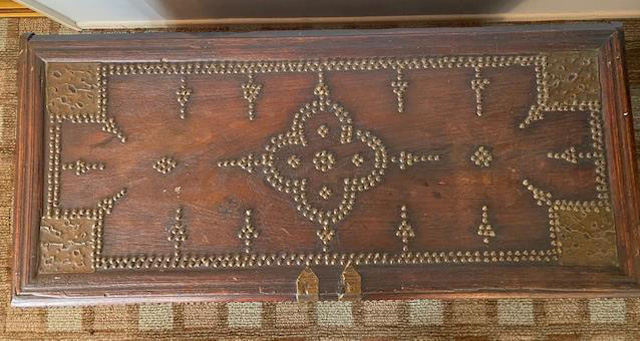 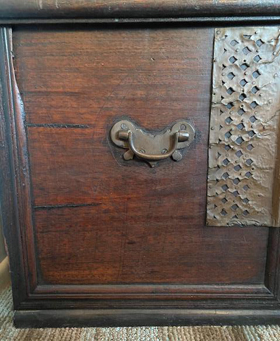 Front corner sheeting wrapped to the side typical of Bombay Type 2.

Caitlin’s Malabar. The chest is made of rosewood or shisham and measures 37 inches long, 15.5 wide, and 14.5 high (94 x 40 x 37 cm). It is remembered as Cita’s “silver chest” and sat next to our fireplace. It was given to my brother David’s daughter, Caitlin, when Cita and Bob Furman moved to a retirement community in 2000. 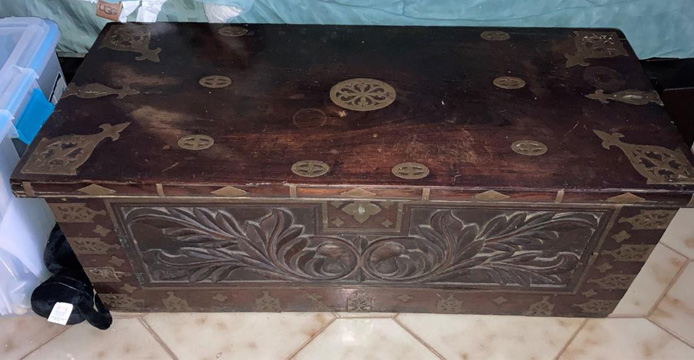 The front is carved with a breadfruit design and fleur-de-lis motifs are featured on the corner mounts on the top and on the side bands. The chest is fastened with a single key lock. 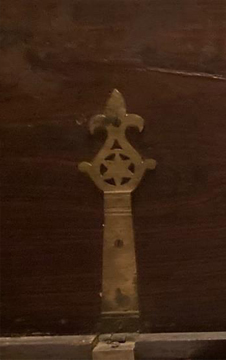 The final on the lid hinge is a fleur-de-lis typical of Malabars. 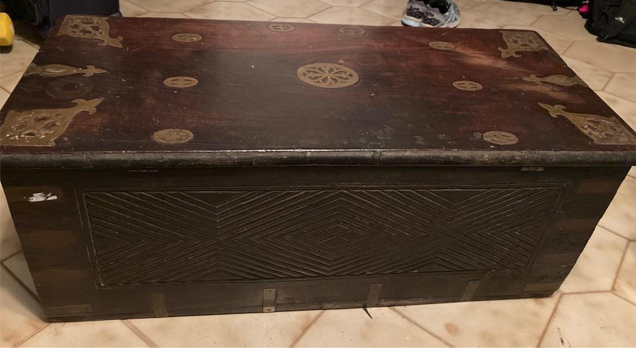 Standard on these elegant chests, the back side is carved in a traditional geometric pattern. These chests have no inside till and any drawers were located in the separate stand. 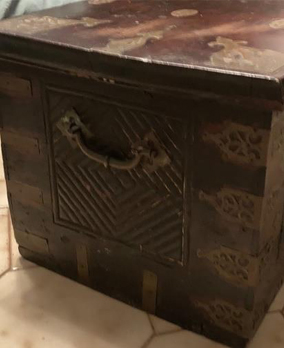 End handles are attached to brass plates and set into a similar carved pattern.

Typical Chest and Till. Sara’s Bombay chest showing typical lid chains, drawers, and the shallow “till” box affixed to one end. 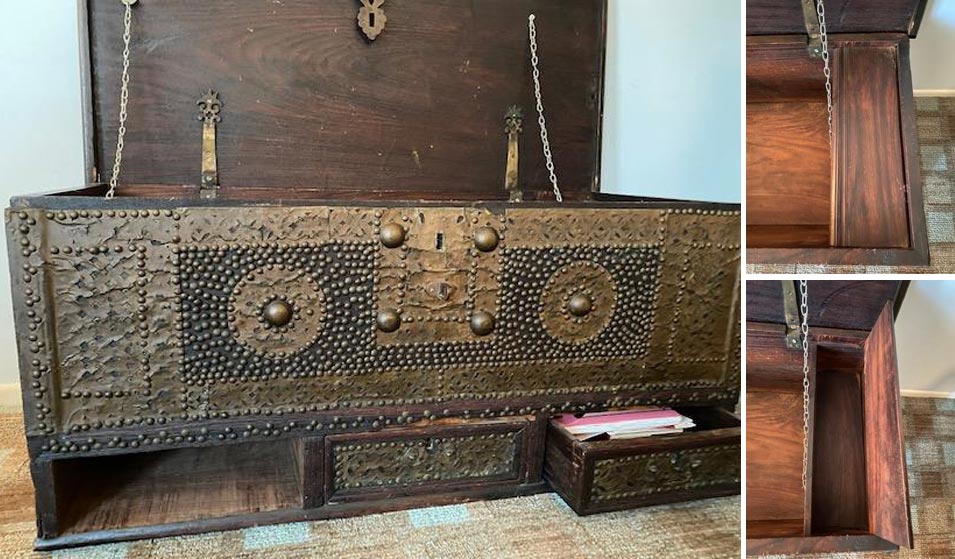 Carol’s Cash Box. Of teak (likely) and brass. Length 15 inches; height 5.5 inches; width 9 inches (38 x 14 x 23 cm). This name is given to the many styles of small boxes (up to 2 feet long) with internal divisions and a removable central tray. They were fashioned after the western-style writing box introduced by the East Indian Company and most date to the late 19th and 20th centuries. Primarily they were used in bazaars as money boxes, hence the generic name assigned to them. They were widely copied on the East African coast for the tourist trade. This was given to Carol by her brother Alan who had received it from their parents, Bill and Ann.

The box is secured with a simple key lock. The lid has an overhang similar to that of the Arab chests and decorative brass corner strips strengthen the seams. The removable central tray has places originally designed for pen quills and inkpots and a long tray for rolled paper. As a cash box, they would hold coins.
Under: Community
Share This:
comments powered by Disqus