Hosted by Ahmad A. Al Sa’adi, senior vice president of Technical Services, the unique ceremony (complete with face masks and physical distancing) was attended by Amin Nasser, president and CEO, and other members of management.

“Fahad’s loyal and professional service to this company since he first joined in 1981 as an engineer has been exemplary, and his leadership and the human touch he brought to his career is a testament to that,” said Al Sa’adi, who noted Al-Helal’s legacy of overseeing a series of some of the most complex mega-projects in the world — from the Manifa Crude Increment to the Wasit NGL programs, as well as the Jazan Refinery, Integrated Gasification Combined Cycle, and the Terminal and Economic City Complex.

And the list goes on, said Al Sa’adi, who noted the special projects he has had a major hand in and helped deliver for the Kingdom and company, including King Abdullah Sports City, the iktva inspired King Salman Energy Park (SPARK), and others.

“He has been a champion of localization within our business and has carried a torch for our nation’s economic road map, Vision 2030,” said Al Sa’adi.

Pride in A Job Well Done 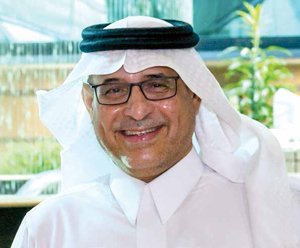 Al-Helal, a graduate of the King Fahd University of Petroleum and Minerals, spoke of his pride in Aramco employees during his career.

“I wanted to join Saudi Aramco from university at the age of 22 because I believed the company to be the best company in the world and it was,” he said. “And still is.”

Always one to value human development and potential, Al-Helal said the biggest reward of his career was having a hand in the growth of local engineering and construction capabilities where “more than 90% of our work is now being executed in-Kingdom through local entities.”

While being appointed vice president of Project Management in 2014 and his experience working on Aramco’s many mega- projects has proven enriching; he has felt the most reward from the people he has worked with, and those who will carry that legacy forward.

“I see that the investment that we put in our people is significant and that will help them to lead the company forward,” Al-Helal said. “To be an Aramcon gives you a huge sense of recognition and gives you pride.”

In retirement, he looks at refocusing on family activities that have been put off for some time. “They will be executed under a new leadership with a very aggressive schedule,” he said. “I am planning to complete projects at home, and I want to contribute to my community, my favorite sport club, and some charities.

In his parting words to Aramco, he voiced confidence in the company’s future and offered best wishes that it continue to be the “best company in the world … something that the Kingdom is always proud of.

“I’m confident that with current leadership and the great human capital Aramco has, the future of the company will be bright and prosperous,” Al-Helal said.

Al-Helal earned an MBA from the U.K.’s University of Hull in 1999 and graduated from KFUPM in 1981. He also completed the Saudi Aramco Management Development Seminar and executive education program at the London Business School. Al-Helal also participated in many professional and leadership development courses, both in-Kingdom and abroad.