A Trip Down Memory Lane with Bil Jines

We recently had the opportunity to catch up with William (Bil) Jines who arrived in Arabia in October of 1988. Bil was a senior reservoir engineer who was in the PEASD department on loan from Mobil Oil Corp. He and his wife, Glenda, lived in Dhahran. Of particular note, the couple is soon to celebrate their 55th wedding anniversary on December 23rd.

Of his many fond memories of his time in Arabia, one special memory stands out. It's of the time his father, Dalmer Jines, visited in 1992. Bil introduced him to several Dhahran Theatre Group (DTG) and Arabian Knights Barbershop Chorus members, both groups of which Bil was a part. While his dad was in town, Bil says, "I had a very nice productive date palm tree and we harvested a large bag full of them. That was one great treat for him. Dad met most of my friends. I took him to Abha and the Asir, Hofuf, and Ras Tanura and gave him a nice tour. He even sang with the Arabian Knights. Paul Thompson, Peter Cunningham and Orvel Wetzel really enjoyed his sense of humor. When he left, he proceeded on to China and the rest of the way around the world. He died in 2003 at the age of 93. I thought some of you might enjoy the 1992 Christmas card he drew." 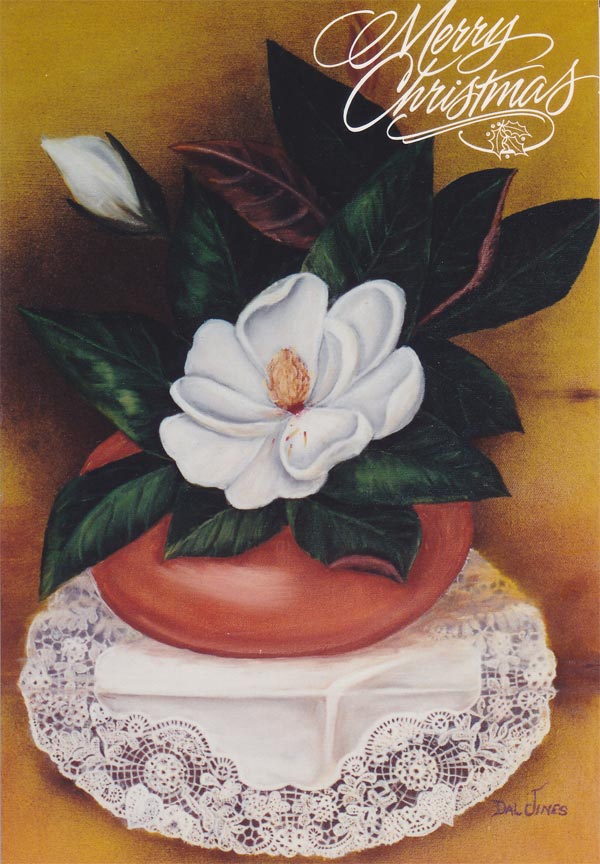 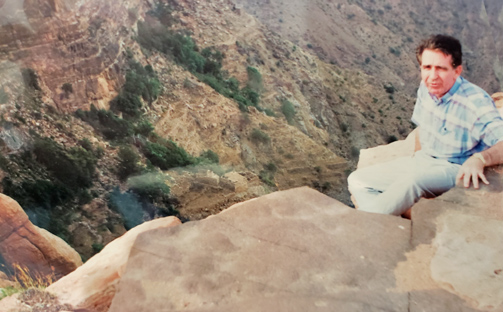 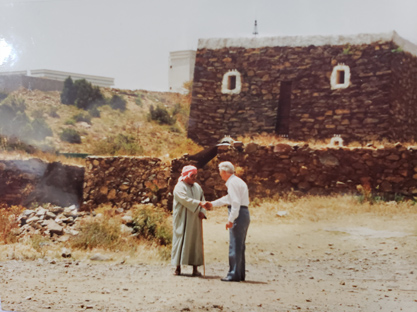 Dalmer Jines meets the owner of the house near Abha. 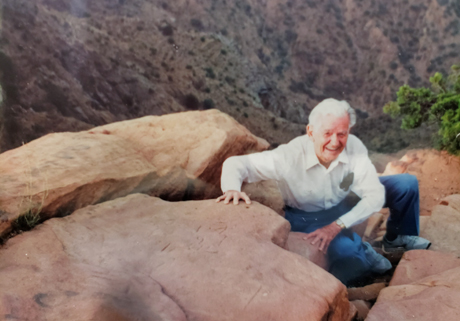 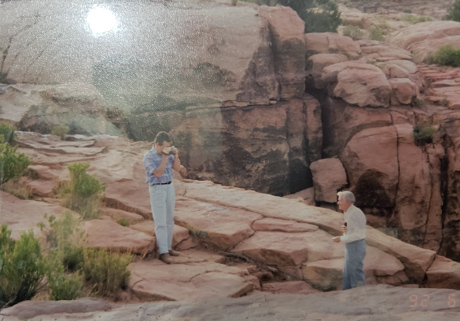 Bil Jines caught taking a picture of his father at Abha.

Bil reminisced further, "I enjoyed visiting the Aramco camps like Ras Tanura, Udhailiyah, and Abqaiq, and the cities/towns like Dammam, Khobar, Hofuf, Qatif, Safwa, Abu Hadriyah, and As Saffaniyah. A church group of us went on a big camping trip up in the wild area around Saffaniyah. We who went on the trip up to famous Thaj and more included Bill and Karen Irwin, Phil and Barb Salstrom, Richard and Shirley Savage, Lamar and Chris May, and several others. Craig Jiminez loaned me his Nissan style jeep and I took a visiting Chevron employee. Wow, we have some great pictures and memories. Once, Glenda was invited to attend the lady's portion of a Saudi wedding, and later, I was invited to attend the man's feast for the wedding in Qatif. I also was invited by Marwan Labban to visit Jeddah and I had a nice visit there."

Among Bil's fondest memories are the ones he made while a part of DTG and the Arabian Knights. Of DTG, he shares, "Bob Reese is a good friend. He always found a part for me in the plays he directed. I remember three really good parts I had; Venticelli #1 in Amadeus, a baseball player (Henry) with a decent amount of lines and action in Damn Yankees, and Dopey in the Snow White Farce." He goes on to recall, "somehow, I always managed to get on the invitation list for the July 4th celebration at the consulate. I really loved being there. The pastor at the Canterbury (Chapel) Ben Chase is perhaps the finest gentleman I have ever met in my life." Of the Arabian Knights, he shares, "Orval Wetzel was a walking music man. He founded the Arabian Knights Barbershop Chorus, which I was lucky enough to get into the charter membership. He began by singing on the ARAMCO busses and when people asked what he was doing (they showed a musical interest) he would recruit them. Through Orval (who now goes by his first name, Rook) the theatrical program was able to invite the greatest barbershop quartet in the world "The Acoustix" to come to Dhahran and put on a show. We "Knights" put on the introductory show, then they finished. I enjoyed this more than any other "show" I ever saw or participated in on the Dhahran stage. The choir director for the Dhahran Chorale and Canterbury choir was John Kunkle. My favorite show with John was the one called "Amahl and the Night Visitors". We managed to show it under an invitation from the Consulate, in addition to our show in Dhahran."

Bil also recalls being in Arabia during Desert Shield and being evacuated on January 14. He returned immediately when airlines were opened up again. He states, "I was in Dhahran when the big blast by the Souk's mall in Khobar happened. I remember that fabulous TV warning statement that they would broadcast."

Bil's time with Aramco ended in 1996 when Aramco released loanees. He was subsequently offered a job in the "tower" but stated, "the two professional buildings - engineering and exploration- were my cup of tea. He left Arabia on June 30th, 1996.

These stories are sure to jog a few memories for many an Aramco ExPat. If you'd like to share your fond memories with Aramco ExPats readers, we welcome you to email us at [email protected].