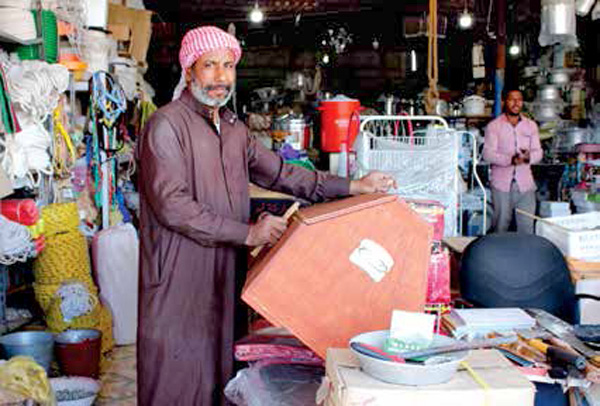 During the visit members of the SAEA experienced the warm hospitality of the bedouins as they browsed the many items on sale.

Nariya — Two buses full of eager Aramcon tourists recently made their way along desert highways for a trip to the community of Nariya. Located about 150 kilometers from Jubail, the city is well-known for its traditional Bedouin market.

The trip was organized by the Saudi Aramco Employees Association (SAEA). Despite today’s modernity, the market hasn’t lost much of its distinctiveness. It is still a world not affected by the passing of time. Here, tradition reigns supreme.

Colorful booths appeared, and the welcoming vendors invited us to visit their iconic displays, booths, and shops. The nomadic shop owners are accustomed to living in tents in the desert that allow them not only to cope with the searing temperatures of summer, but also mitigate the chilly winter nights. And the sight of them gathered in the marketplace gave visitors an authentic taste of the Kingdom.

At the Nariya Bedouin market members of the SAEA visiting group were able to shop for a variety of traditional items ranging from tent equipment to terracotta vases.

Indeed, in the market, the Bedouin business owners were selling everything one would need for dealing with this kind of life — tent equipment, raw wool carpets, cushions (which, when placed on the ground, act as sofas), curtains composed of long strips of colorful fabric, coffee pots and pots for cooking, as well as terracotta vases to hold water.

This is also a popular stopping place for camel farmers, with a variety of goods on offer, including camel saddles, traditional heavy sleeping bags, traditional padded coats, craft boxes, and tin cans for camel milk.

A Little Something to Eat and Wear

The Bedouin market offered unique food items such as dates, honey, and spices.

One of the things that struck us most was the dried cheese shaped like a white biscuit with a strong savory taste. They were stacked in boxes under the sunlight that infiltrates through a thick net to prevent contact with insects.

Just on the opposite side of the road, there were butcher shops selling fresh camel meat that could be seen hanging from the ceiling through the windows.

We experienced the warm hospitality of the Bedouins, as we were invited to wear their traditional elegant dresses and to sit on their sofas to enjoy a spiced coffee.

After an eventful day, on the return from Nariya, the SAEA group took time to stop in Jubail and enjoy a nice meal.

After this pleasant shopping, we hopped on the bus again to visit an amazing restaurant on the beach. Under the sunlight, we had a fantastic Lebanese open air lunch. Each table allowed everyone to converse, get to know each other, and share the cultural diversity of Saudi Aramco.

The unique offering was organized by SAEA board members Louise Todd and Trace Robbers, who chaired and organized the trip, with Deidre Robbers from the SAEA office also assisting.