A Family Trip to Lahore-Punjab Province 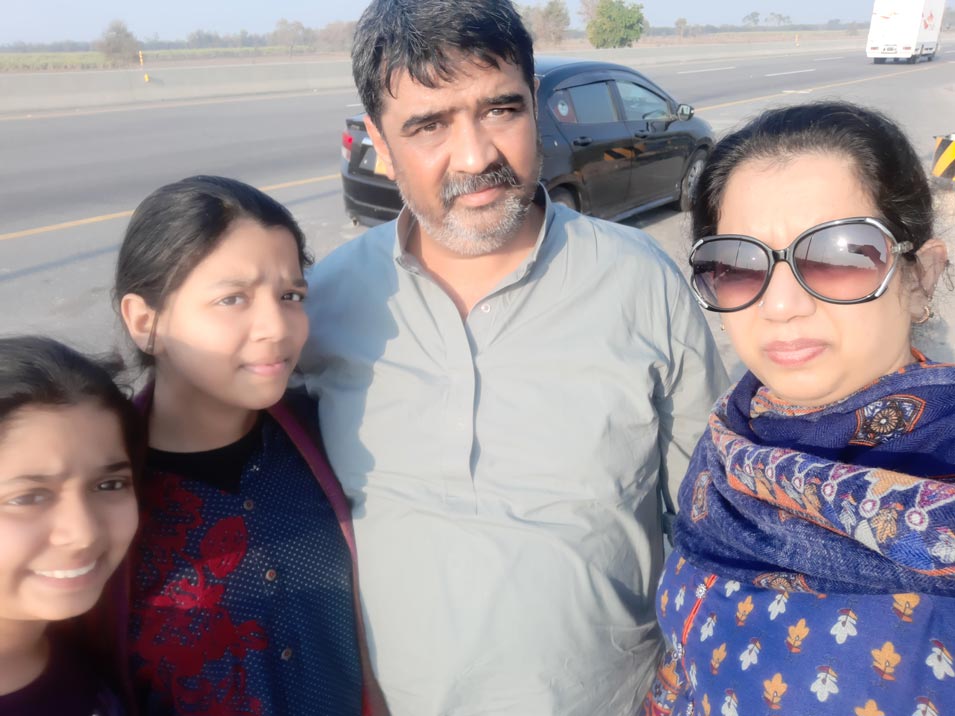 The following report was written by Zara Imran, grade 5, granddaughter of Aramco annuitant Engr. Iqbal Ahmed Khan of Karachi, Pakistan. The report was an assignment given to Zara by her grandfather during the ongoing covid-19 citywide lockdown.

On January 25th, my father was invited by his friend to attend his niece’s wedding in Lahore, Pakistan. There was no plan of visiting Lahore as our school was open but our father got a call again from his friend and he insisted he attend the wedding, so we planned to go there by road.

Introduction of Lahore-Capital of Punjab Province:

Lahore is an amazing city of Pakistan and is the capital of Punjab province. It is at the peak point of the India-Pakistan Border Wahgah as it connects these two nations with each other. Lahore is ancient and its population is massive because the Mughal Empire was founded and flourished here, centuries ago. This amazing city has fabulous buildings and ancient monuments. There are many areas where you can find historical buildings that were built in old times by the Mughal Dynasty. There are many beautiful visiting points and amazing parks which make this city unique among others. It is also called the City of Gardens due to its many gardens. It is also known for its rich culture and lively atmosphere with markets, shopping centers and a food street, a wonderful scene in the evening.

We woke up at 5 AM and made final preparations. My mother cooked Aloo Qeema and Pulao for the journey while my father checked if all the car accessories were in place. We finally started our journey at 7:45 AM.

At 9:25 AM sharp we were in Hyderabad. Hyderabad is the closest city to Karachi and it is the second-largest city in Sindh. We stopped at Moro Gas Station for petrol and to use the washrooms, as well. The winds were strong and it was very blustery. At 3:10 PM, we reached Sukkur, where we got out of the car to eat lunch at the Sukkur Highway restaurant family hall and recite Zuhr Namaz. We continued our journey on the motorway at 3:25 PM. 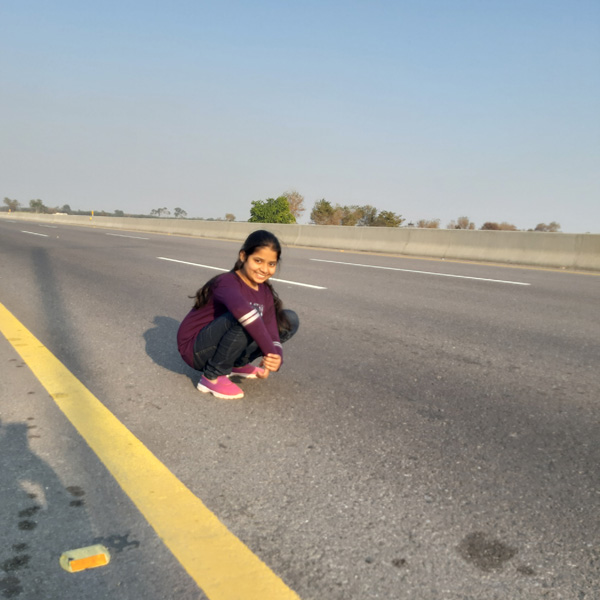 Zara Imran posing for the picture while sitting on the road of the Sukkur-Multan Motorway.

We were travelling on the New Sukkur-Multan Motorway, which was less time consuming than the previous motorway. It took only 6 hours for us to reach Multan on the recently built highway, compared to the old one which took 12 hours. The new motorway was very stunning, proper and neat. We took 6 hours to reach Multan, a city in Punjab famous for its trades and popular Sohan Halwa. Multan is also known as the City of Saints and Tombs. At 8 PM sharp we were on the Lahore Motorway, which was leading us to the awaited city, Lahore. Exactly at 11 PM, we were in Lahore. Apparently, there was no time to attend the wedding so we directly went to the hotel. Two hours later we were in our hotel, Clifton Hotel. The total length of our journey was approximately 1,300 Kilometers.

It was a tiring journey of about 16 hours, so after settling we slept and woke up at 12 noon. On January 26th, after getting ready we left the hotel and with the help of Google Maps, we found a restaurant to have breakfast. We ate the mouthwatering, traditional Murgh Chana, the specialty of Punjab with the hot Naans.

At 3 PM we were at the Wagah Border. The lowering of the flags ceremony at the Wagah-Attari border is a daily military practice that the security forces of India and Pakistan have jointly followed since 1959. The drill is characterized by elaborate and rapid dance-like maneuvers and raising legs as high as possible. It is alternatively a symbol of the two countries’ rivalry, as well as brotherhood and cooperation between the two nations. This ceremony takes place every evening immediately before sunset at the Wagah-Attari border. The ceremony starts with a blustering parade by the soldiers from both sides, and ends up in the perfectly coordinated lowering of the two nations' flags. We watched the outstanding ceremony with joy. It was patriotic and chauvinistic. We purchased some souvenirs and took pictures with the soldiers standing outside.

Then we headed to meet my mother’s college friend, Eman Khala. We experienced the Lahore Ring Road which is in the shape of a ring. It is an 85–Kilometer long orbital highway located in the city. After chitchatting with Eman and her family members, we made our way back to the hotel. 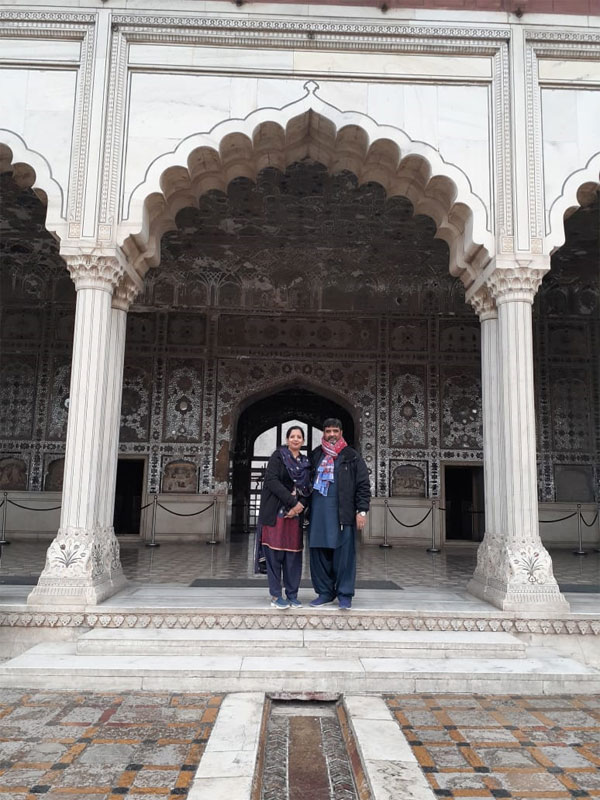 Erum and Imran are in the Sheesh Mahal of Lahore.

The next day, January 27th, we visited the historical places. Though, it started to rain heavily while we were on the way. We sat in a mini truck with an open roof. It took us to Sheesh Mahal. Sheesh Mahal is made up of mirrors as Sheesh means mirror and Mahal means castle. It was beautifully decorated with all types of mirrors. Then, we went to see Shahi Qila. Shahi Qila is a citadel in the city of Lahore. It is also known as The Lahore Fort. It was built in the time of Mughal Emperor Akbar and is surrounded by the most splendid buildings. We also wore costumes of the dresses of the rulers in the Mughal Empire. Then we ate the delicious Aloo Tikki in front of the Badshahi Mosque. The Badshahi Mosque is a Mughal era masjid in Lahore. Next, we boarded the mechanized train in Iqbal Park, to go to Minar-e-Pakistan. Minar-e-Pakistan is a National Monument. The tower was built between 1960 and 1968 on the site where the All India Muslim League passed the Lahore Resolution on 23 March 1940.

After viewing all the phenomenal places, we went to eat lunch. We ate some appetizing Samosas with the mouth-watering chutney on it. After that, we went to my father’s aunt’s house. We had a delightful dinner with her and her family. We then headed towards our hotel. 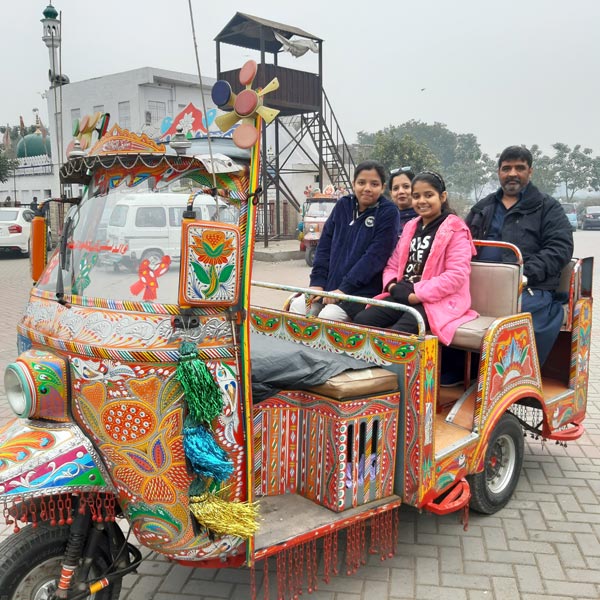 Imran, Erum, Zoya and Zara in a modified rickshaw, ready for a tour of historical places in Lahore.

The next day, January 28th, it was still raining. We sat in a Chinchi. A Chinchi is a traditional type of auto-rickshaw which has a place to sit on its back-side. It took us to the famous Anarkali Bazaar. It’s an ancient market that has vendors selling all types of items; shoes, clothes, utensils, stationery, etc. There is also a food street adjacent to the Anarkali Bazaar. We had lunch on that street and then went to explore more of the astounding market. After buying a few things, we decided to head back to the hotel to get ready for the dinner we were invited to by my mother’s other college friend, Shafaq Khala. But as we were leaving, it started to pour more heavily and it became difficult for us to find a ride. Eventually, we did find a rickshaw to get us back to the hotel.

While leaving for Shafaq Khala’s place, we checked out of the hotel. We had a really tasty dinner at her house and when it was time to leave, we went straight to the motorway, as it was our last day of visiting Lahore.

During the journey from Lahore to Multan, we experienced immense fog; it was difficult to see the nearest object. So, due to the dangerous conditions, we waited for an hour and a half in Multan and then made our way back to Karachi. We reached our house safely, at 6:00 PM.

It was truly an enthralling experience. We are hoping to go back there soon, Insha Allah!

Zara is a student in Generations School-Karachi and is the monitor of her class.