A Desert Trek to Thaj 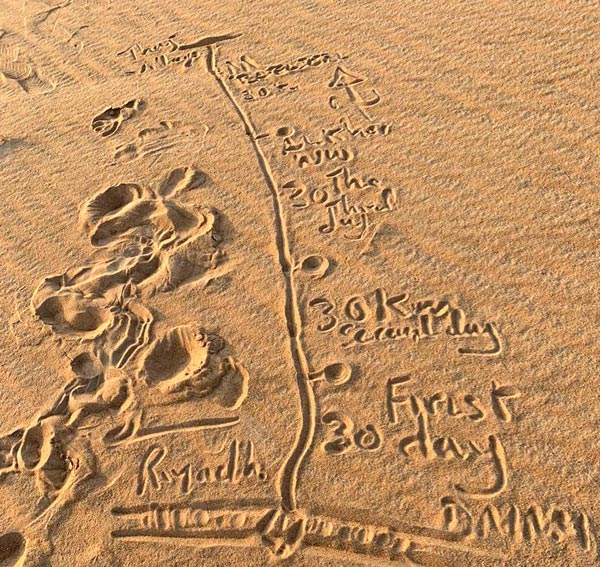 Quriyan drew the map of the journey in the sand, and sent it to Scott Baldauf by WhatsApp.

Quriyan M. Al Hajri’s knowledge of the desert is legendary. So, when the retired Aramco well sites supervisor invited me to join him for a five-day, 120-kilometer desert trek from his home near Ain Dar up to his birthplace near the historic village of Thaj, I was intrigued.

His hand-drawn map, sent to me via WhatsApp, looked like something out of The Lord of the Rings, with stretches of sand and water wells and pointy mountains as landmarks. I wasn’t entirely sure that I was physically fit enough for the journey. But I was sure I was going with the best desert expert I was ever going to find.

It would be a journey that would test my endurance, but would also bring me out of my comfortable expat bubble and teach me about the culture, the wildlife, the landscapes, and the environmental challenges of the Kingdom I call home: Saudi Arabia.

Quriyan M. Al Hajri asked Scott Baldauf if he wanted to go for a walk. Just a short 120 kilometer walk from his current home near Ain Dar toward his birthplace near the historic town of Thaj. It was an opportunity to witness the effects of desertification in this region, and to try to make a difference by planting native trees along the way.

Our first day started early. To beat the heat, Al Hajri began walking at 3 a.m. By the time we met him on a gravel road north of the village of Al Harra, 8 hours later, he had already covered 55 kilometers.

Al Hajri’s son, Nasser, and I pulled our vehicle up onto a dune, laid out a carpet in the shadow of the SUV, and started a fire to make a lunch of camel meat kabsa. As lunch cooked, Al Hajri played music on the car stereo to celebrate the start of our journey. We danced the ardah to boisterous Saudi music, and then Al Hajri switched to an Alan Jackson country song, “The Older I Get.”

Over the next three days, Al Hajri began my desert education — call it Bedouin 101 — about how to navigate the landscape, recognize wildlife, and survive in the desert.

Al Hajri didn’t use any fancy technology to set his course. He pointed to a small tuft of grass. “The wind comes from the north,” he said, “and it leaves a pile of light-colored sand on the southern side of the grass. So, khaliwali with GPS. If you want to know where north is, just look for grass and see where the sand piles up.” 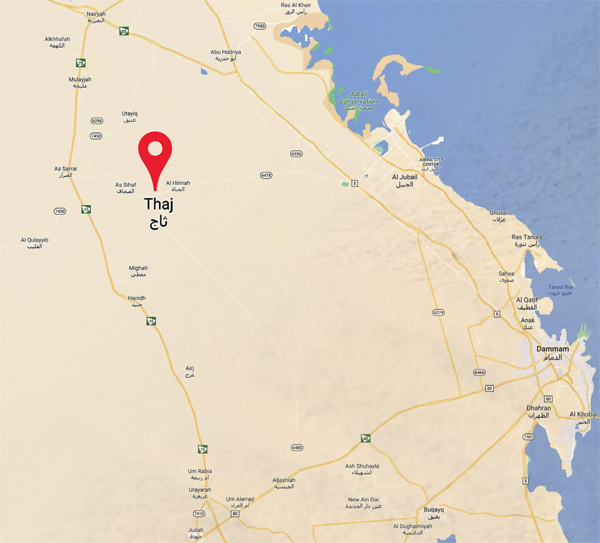 In 1998, archaeologists from the Regional Museum of Dammam excavated burial sites in the historic town of Thaj, which is 95 kilometers west of Jubail. The treasures they discovered dated back more than 2,000 years and are now preserved at the National Museum in Riyadh. They include:

• A gold mask from a funerary chamber
• Remains of a girl on a wooden bed in a separate chamber
• The girl was wearing gold necklaces decorated with rubies, turquoise, and pearls
• The bed was surrounded by four golden statues.

Lessons in The Sand

My lessons were written in the sand all around us. I was taught how to identify the footprints of camels, with their two pointy toes in the front and round heels in the back; foxes, with their small front paws and larger back paws; beetles, with their multiple tiny footprints; and large desert lizards, with their tails and triangle-shaped clawed hands.

Each day, in dry lake beds or sabkhas, we planted trees that once dotted this landscape. Al Hajri is a modern Johnny Appleseed, doing what he can to restore the hardy desert landscape he remembers from his childhood. “It may be because of reduced rainfall, it may be because of too many animals, but we all need to do more to protect the environment,” he said.

To my untrained eye, it all looked like an endless sea of sand. But Al Hajri steered our path toward major landmarks on the horizon, white rocky jebels or the smudges of dark green vegetation around public water wells.

In our two final days, we settle into a rhythm, clocking 15 km in the morning, and another 15 km in the afternoon. As the sun sunk in the sky, we would find a soft sand dune to lay out our sleeping bags for the night. And as a protection against wild animals and djinns, Al Hajri would demonstrate an old Bedouin tradition of drawing a circle in the sand around our campsite, reciting a Qur’anic prayer of protection, the Ayat al Kursi. Then we would fall asleep under a clear night sky, the Milky Way with its millions of stars stretching out above us like a veil. 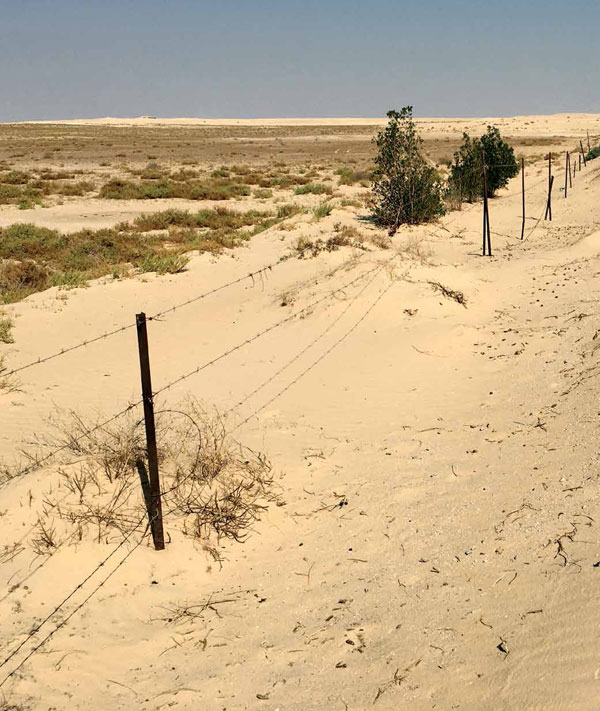 This region of Saudi Arabia has always been desert, but the impact of overgrazing and other human activity has had a devastating effect on vegetation. Land that is protected by fences (at left) still have this vegetation, while open public areas where herds can graze (at right) have been denuded of grass, shrubs, In mid-October 2020, Geraiyan and even trees. 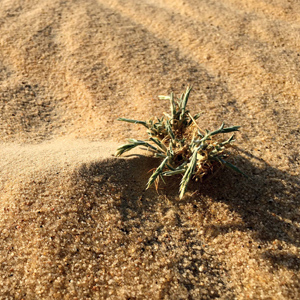 On the third day, we reached our main destination: the flat-topped Jebel Bateel al Janub on the outskirts of Thaj, where Al Hajri was born. Sixty-five years ago, Al Hajri’s mother gave birth to him at the base of the jebel, in the shade of a pair of trees. The only sign of those trees now is a pair of stumps, probably chopped down for firewood years ago.

Under a strong afternoon sun, Al Hajri offers a prayer for the country of his birth, for the people who live in it, and for the environment. And then he plants one last sapling before we make our way home.

Walk for the Environment

In mid-October 2020, Geraiyan M. Al Hajri (or Quriyan, the official spelling of his name), former Aramco well sites supervisor and desert expert, took his annual walk through the deserts from his home in the village of Junaih, near Ain Dar, to ancient Thaj, where he was born — a journey of some five days (120 km) on foot. Over the years since he first began this traditional yearly trek, Al Hajri has observed the deterioration of the local environment — the loss of trees and desert shrubs among other things.

This year, Al Hajri wanted to draw attention to the environmental changes he has been witnessing, in hopes of encouraging people to care more for the natural environment and work to preserve it in the future. So far, his journey has been highlighted by a number of Saudi TV news outlets, as well as in a video produced by the Kingdom’s Ministry of Environment, Water, and Agriculture.

Al Hajri’s goal from this trek was more than a mere travelogue. He was confident that the desert could return to a healthier state if people could be educated about the need to protect the environment. People can make a positive change in their world by taking a few simple steps.

Overgrazing by growing flocks of sheep and camels is part of the problem, Al Hajri said, but so too is the effect of the increased number of cars being driven over the fragile desert, and the number of living trees being cut down for firewood. Trees and shrubs have lived in this harsh arid climate before — and in fenced in areas of privately owned ranches, trees and shrubs still exist. But unless people change their habits and cherish the Kingdom’s natural wildlife, it may be lost forever.

Al Hajri said his concern over the environmental situation became very serious during a previous Saudi-American camel caravan expedition through the Rub’ al-Khali — from Nadgan to Umm al-Hadeed — about a decade ago. At that time, he noticed that some of the precious vegetation of the region was in retreat. Al Hajri walked through the desert rather than riding a camel for most of that journey. He said a silent prayer in hopes that the situation would improve.