A Day in the Life of a Saudi Aramco Helicopter Pilot

Tanajib — It is 4 a.m. at the Tanajib camp. The outside temperature is 11°C, as expected at this time of year.

In Building 130, an alarm bell rings awakening Bassam H. Fallatah — it’s an early start. Saudi Aramco has passengers that need ferrying to offshore platforms, so it’s time to get to work.

Fallatah has been a Saudi Aramco employee since 2010. It was in 2015 that he joined the Saudi Aramco Aviation Department, and in 2018 he competed his pilot training at North Dakota State University in the United States.

Two strips of photos show a typical day for Bassam H. Fallatah, which starts early to prepare for the first flight until the end of his day, when he relaxes with one of his hobbies, which include playing his guitar. (Photos: Hasan AlMubarak/MPD)

As a proud pilot, each day he joins his colleagues and co-pilots at the Saudi Aramco hangar in Tanajib. They operate 50 flights a day, reaching more than 65 locations and transporting nearly 800 passengers to offshore fields and bringing them back.

Starting from his room in the camp, we documented his exciting day. After preparing himself, Fallatah is picked up by the crew car and taken to the hangar where he starts preparing for his flight. 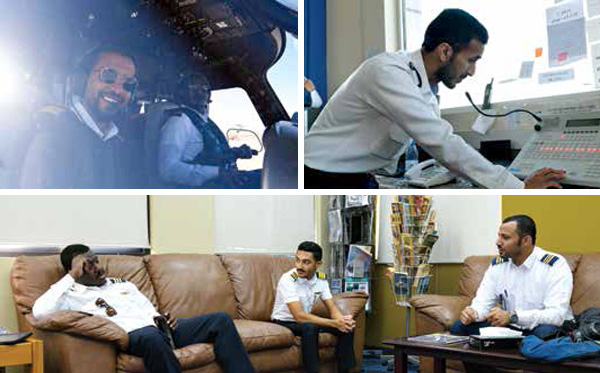 First on the checklist is checking the Notices to Airmen, followed by the aircraft’s book, and then the flight plan at the dispatch office.

Fallatah then heads to the pilot lounge to get his flight gear (life vest, Flight iPad, aviation headset, H2S detector, and — of course — coffee mug). 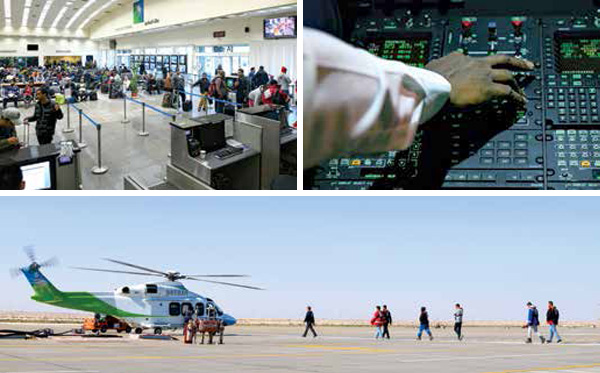 Bassam H. Fallatah and his colleague pilots at the Saudi Aramco hangar in Tanajib operate 50 flights a day, reaching more than 65 locations and transporting nearly 800 passengers to offshore fields and bringing them back.

After a long day, at 5 p.m., Fallatah unwinds by going to the gym, meeting friends at the coffee shop, or relaxing in his room drawing or playing the guitar.

At 8 p.m., we said goodbye to Fallatah. His day encompassed and embraced Saudi Aramco’s core values of safety and excellence — values that underpin Saudi Aramco aviation operations and provide the rig crews with reliable transportation on a daily basis to the rigs to fulfill their duties.