75 Years of Bringing You Company and Community News 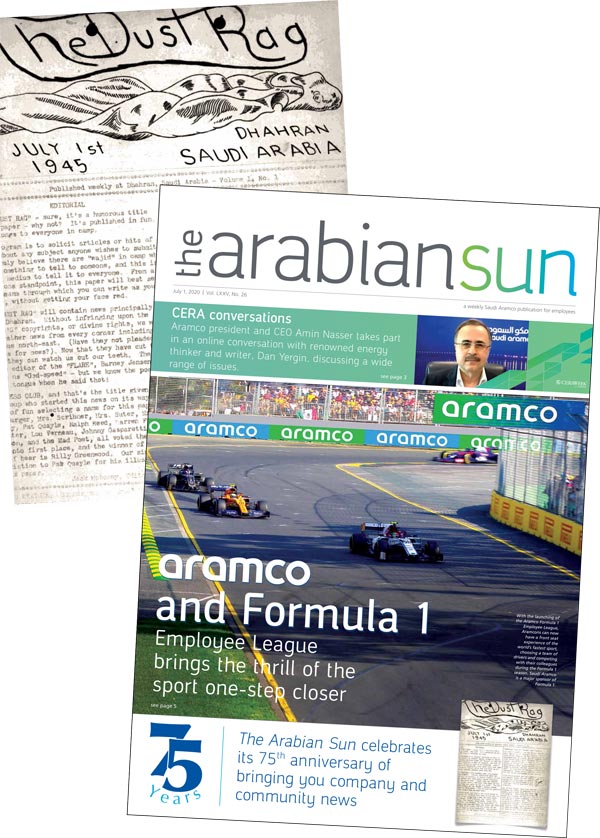 Dhahran — 1945 was a historically monumental year. The war in Europe had ended in May with the victory of the allies over Germany and the war with Japan would end in August. “The Lost Weekend” and “National Velvet” were on the silver screen in the U.S. and one Arthur C. Clarke put forward the idea of a communications satellite in a Wireless World magazine article.

In July of that year in Dhahran, a rather rudimentary looking publication was born, a publication that was the first incarnation of what we know today as The Arabian Sun.

The Dust Rag made its debut on July 1, 1945, under the editorship of Jack Mahoney. Its masthead featured a sketch-style rendering of sand dunes in the Saudi desert underneath a cursive ‘The Dust Rag.’

Saudi Aramco, which can trace its beginnings to 1933 when a concession agreement was signed between Saudi Arabia and the Standard Oil Company of California (SOCAL), now had its first publication for employees. 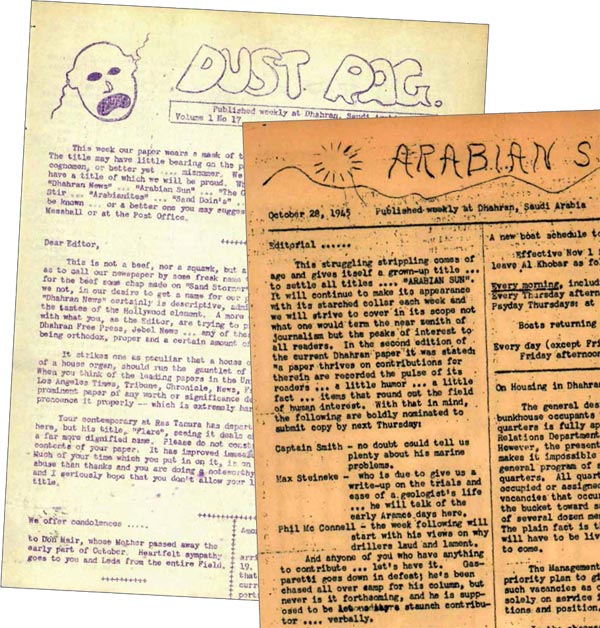 ‘Write as you Please’

“From a relations standpoint, this paper will best serve you as a means through which you can write as you please, without getting your face red,” Mahoney’s first frontpage editorial declared in courier typeface.

The publication began as an informal, employee-led and focused newsletter for Aramcon families living in the Dhahran camp.

Mahoney’s mission statement was “to solicit articles or bits of news about any subject anyone wishes to submit.”

The Dust Rag evolved into The Oily Bird on October 14, 1945, a title masthead that would last just a few weeks before being changed to The Arabian Sun until the end of that year.

The publication then merged in 1946 with Ras Tanura’s newsletter The Flare, and the Sun and Flare was born and would keep that title for many years before settling on The Arabian Sun as a title.

At twice weekly, in 1951, it offered its first photographs and began transitioning from a purely community-centered publication to include the company’s business news.

The evolution of the company throughout the decades and its major business milestones have all been documented in and mirrored by The Arabian Sun in the intervening years.

Early issues featured general camp news, jokes, and information about activities, birthday announcements and general snippets of interest to employees and their families.

The July 3, 1957, issue of The Sun and Flare celebrated the publication’s 12th anniversary and also featured a front-page retirement photograph of Jack Mahoney at work in his office.

Interestingly, the front-page also features news of a flu outbreak, something employees of today will relate to with the COVID-19 outbreak.

The publication kept rolling off the presses once a month during the testing and uncertain times of the first Gulf War, which rocked the region from 1990-1991 and documented Saudi Aramco’s huge cleanup efforts in the Arabian Gulf after oil was deliberately released into its waters by Iraq.