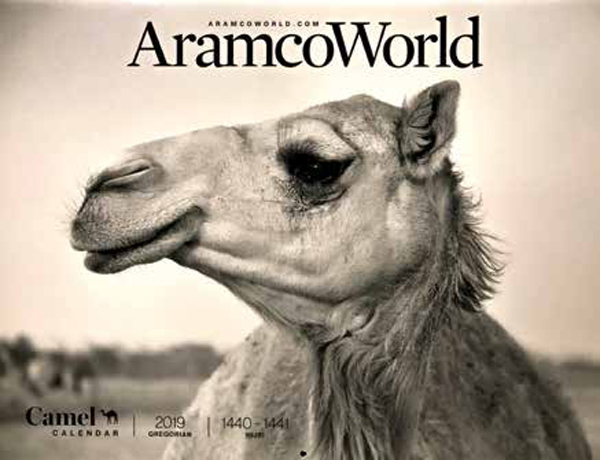 AramcoWorld won two first-place awards for its 2019 calendar featuring photos of the camel in historic and modern roles, as well as an honorable mention for the accompanying edition devoted to the influence of camels on global cultures.

Houston — It was a record-breaking year for AramcoWorld at the 2019 Folio: Eddie and Ozzie Awards Gala, held recently at New York’s Hilton Midtown, just blocks from where the magazine was founded 70 years ago this month.

AramcoWorld took home a total of a nine first-place awards, as well as a number of honorable mentions for editorial and design excellence — four more awards than last year — buoyed by multiple wins by its strong digital presence and multichannel storytelling.

“The number and breadth of these awards is fantastic — a great reflection of the dedication to mission by our editorial staff, our expert contributors, our contractors, and very importantly the company that, as publisher, is supporting bridge building stories across more and more diverse channels,” said AramcoWorld editor Dick Doughty. “It’s a lot like what the Aramco communications staff was doing in 1949, looking to connect people, using an idea for a newsletter named AramcoWorld, only a lot bigger now.”

The publication’s digital-first strategy came out a clear Folio: winner with three awards for overall online experience. The AramcoWorld app won first place for design and an honorable mention for editorial, and the magazine’s website earned a first place in editorial.

“Our digital efforts are exciting as we continue to grow our channels,” said Johnny Hanson, digital media editor, noting this year’s nearly 20% digital audience growth. “We realize the importance of this space and continue to expand it. What we produce is out of the love of what we do for our audience, and to receive awards for it just makes it more special.”

Camels Come Out On Top

Camels came out on top, too. AramcoWorld won two first-place awards for its 2019 calendar featuring photos of the camel in historic and modern roles, and it received an honorable mention for the full Nov./Dec. 2018 issue — a theme devoted to the influence of camels on global cultures.

“The theme of camels was a natural one for us because of how important they have been — and continue to be — for many of the cultures we represent,” said assistant editor Alva Robinson.

What attracted the most awards — four in total — was the magazine’s May/June 2019 cover story and online video on the astrolabe, a medieval astronomer’s tool developed in the Middle East whose “apps” aided navigation and celestial reckonings.

In 2018, AramcoWorld’s “FirstLook” won a first-place award, and this year it took home two. This photo oriented, full spread department opens the magazine to inspire and set a tone for the whole issue.

Three feature stories took prizes: The July/August 2018 cover story on health educator Edna Adan, “Somaliland’s Midwife,” won first place for profiles, and a feature from the same issue, “The Fragile Songs of the Sumatran Rhino,” won a first place as well. An honorable mention went to the January/February 2019 “David Dorr’s Window East” — the story of the only known travelogue of the Middle East by an American slave.

It’s in the overall editorial excellence category, however, that Doughty says Folio:’s recognition means the most. As it did last year, AramcoWorld earned an honorable mention. The contest’s judges look at “every detail” of three full issues, says Doughty, and “score you according to how well they think the magazine fulfills its own mission statement. We’re here to discover and explore how our cultures have fed each other, informed each other, made each other better, from the earliest times to right now, and these recognitions ultimately reflect the people and the company who make it all possible.”

Al Ayyam Al Jamilah, the company’s semi-annual magazine for the global annuitant community, tied for first place in editorial excellence. The winning story — “103-Year-Old Retiree Recalls Old Places and Faces” — ran in its Spring 2018 issue and it was written by the magazine’s editor, Art Clark.

“It was delightful to be able to reintroduce retiree Johnnie Merritt to the Aramco community,” said Clark, adding that Merritt went on to attend the 2018 annuitants’ reunion in Austin, Texas.