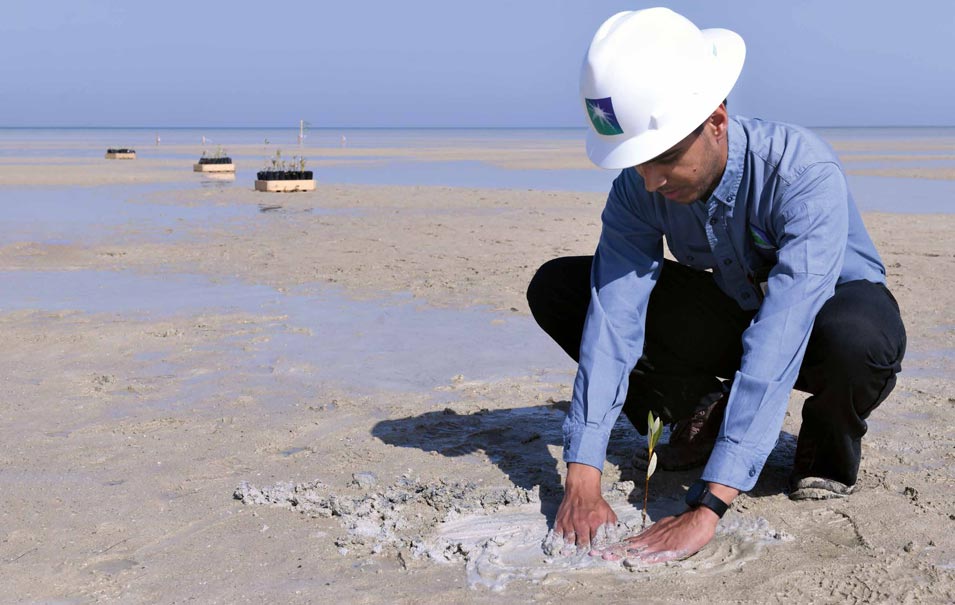 Environmental engineer Mousa O. Alharthi plants a mangrove sapling into its new Arabian Gulf home of ebbing tides, taunting coastal breezes and summer heat. The mangrove is one of a record 2 million Avicennia marina trees planted this summer, adding to the 2.3 million mangroves already planted by the company since the 1990s.

A record 2 million mangrove saplings planted earlier this summer by Aramco brings the number of mangroves restored along the Arabian coastline by the company since 1993 to 4.3 million.

The plantings, undertaken by Environmental Protection (EP) in collaboration with Northern Area Oil Operations, form a natural sink for carbon dioxide (CO2), and are part of Aramco’s “Green Energy Program,” an ongoing commitment toward turning the tide on climate change.

“Although Saudi Arabia has sporadic rainfall and sparse vegetation, it is surrounded by seas on both sides, making mangroves ideal as a species to increase natural forests in the Kingdom, because you don’t need to water them,” says Mousa O. Alharthi, an EP environmental engineer who holds two master qualifications in environmental science.

“Mangrove forests are one of nature’s most powerful ecosystems,” he said. “They live in conditions that no other tree can, connect the land and the sea, and are an important nature-based solution toward adapting to and mitigating climate change.

“Our plantings have a strong survival rate here in the Gulf, despite its waters having approximately 4,300 milligrams of salt content per liter, which is higher than most oceans and seas around the world,” Alharthi added. 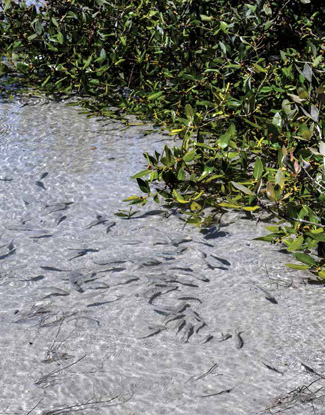 Fish swim in the full tide around hardy mangrove forests, protected and restored on shorelines by Aramco to breathe fresh vitality into the air and water, provide habitats for fauna and flora, and as a living barrier against climate change. 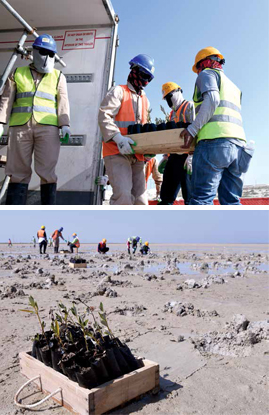 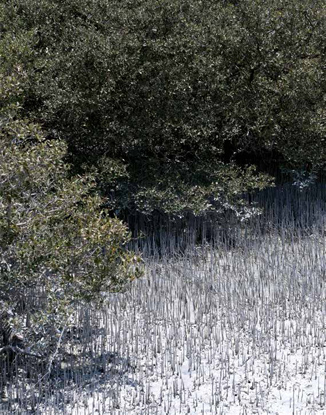 An amazing tree particularly suited to the Kingdom’s thirsty desert shorelines, mangroves extract salt from seawater, discharge it on their leaves, and when each tide washes in, close the breathing pores on their aerial roots so they do not drown.

Alharthi explains that, when compared to other trees, mangroves have an extraordinary ability to remove CO2 quickly from our planet’s atmosphere, which helps mitigate global warming.

“Studies show mangroves sequester carbon many times faster, and more permanently, than land-based forests, and compared to most tropical forests, store up to five times more carbon,” he said.

EP estimates an Avicennia marina tree sequesters up to 1.5 metric tons of carbon over its average 60-year lifetime.

Mangroves are a critical ecological foundation around the world. Their complex root structure descends deep to prevent shoreline erosion from waves and heavy storm surges, providing adaptation to climate change impacts. This also forms life-sustaining habitats for plants and birds, as well as nursery areas for marine life, supporting local communities relying on these productive ecosystems for their food security and well-being.

An amazing tree particularly suited to the Kingdom’s thirsty desert shorelines, mangroves extract salt from seawater, discharge it on their leaves, and when each tide washes in, close their lenticels — breathing pores — on their aerial roots so they do not drown. 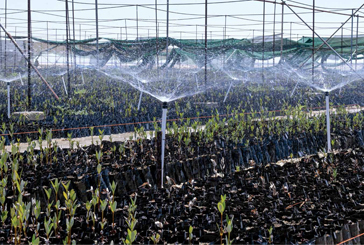 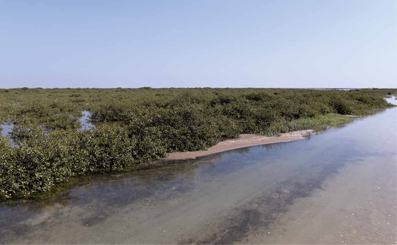 In 1993, Aramco transplanted its first mangrove seedlings as part of a study commissioned with the Research Institute at King Fahd University of Petroleum and Minerals in an effort to reestablish mangrove forests along the shores of the Arabian Gulf. The company also partnered with the National Commission for Wildlife Conservation and Development as well as the Ministry of Agriculture and Fisheries to determine whether mangroves could be successfully restored, and now the shores have well-established mangrove forests. 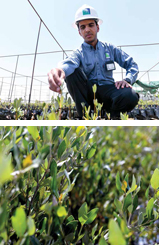 In the early summer, when the Gulf’s sea breeze embraces the blazing heat of the eastern desert, a fragrance of crisp sea mist infuses the cooler coastal air. 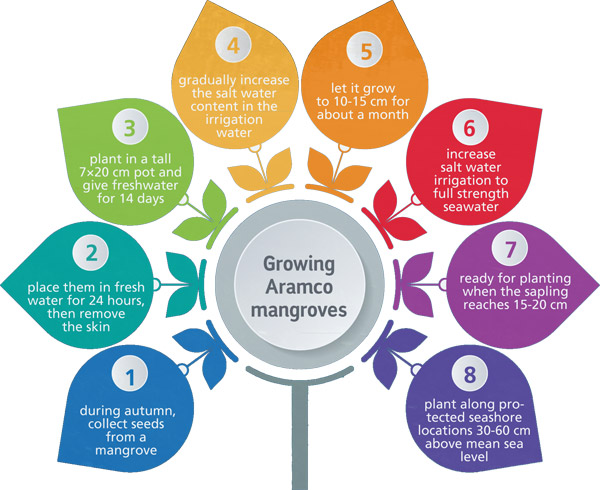 The impressive logistical operation is now primed for the planting to begin within 30 to 60 cm above the mean tide level — once the moon’s gravitational pull exposes the intertidal shore by receding the blue seawaters.

“Restoring our environment is important work, so we were determined to fit the request into our tight logistics schedule,” said supervisor Khalil I. Musailem. “It was uplifting to be part of the company’s record planting of mangrove trees.”

South of the planting area around the aerial mangrove roots uncovered by the low tide, ospreys and greater flamingos forage, while crabs scamper with delight in the sticky mud of a 64 km2 company coastal preservation area close to Ras Tanura, where the company commenced its first refinery operations in 1945. 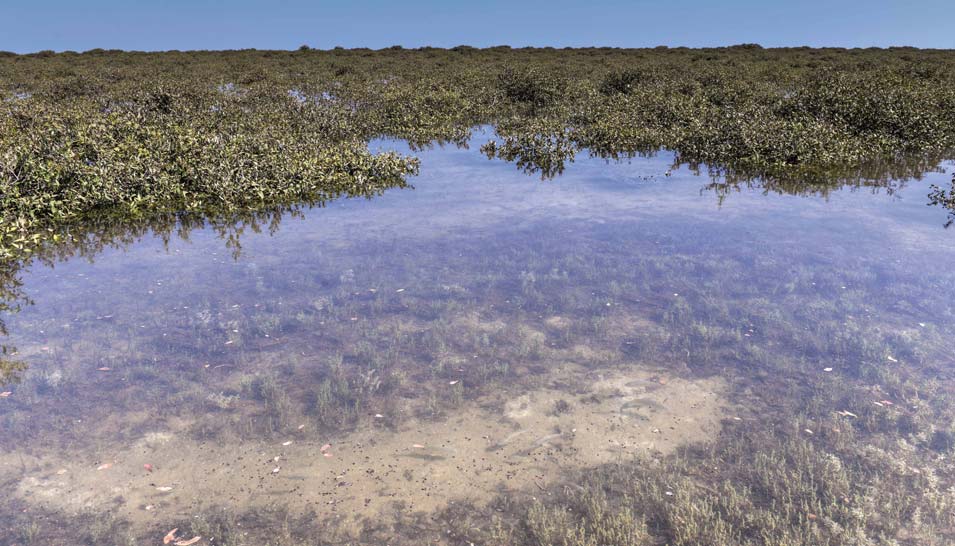 To raise community awareness about the importance of mangroves, the company is developing a mangrove eco-park with an educational visitor center, and an elevated boardwalk traversing the mangrove, saltmarsh, and intertidal habitats.